Are the Taliban going to
fund the restoration of
a synagogue in Afghanistan? 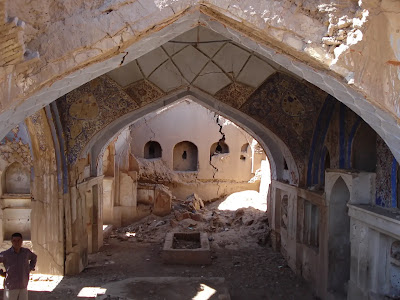 Yu Aw Synagogue in Herat has been given protected status

In recent months, I have written in Studies about the loss of diversity and pluralism in Afghanistan since the Taliban stormed into Kabul, and I have also written about the loss of the centuries-old Jewish community following the departure of the last Jewish resident of Kabul.

However, reports in recent weeks suggest the Taliban has approved conservation work on an historic synagogue in the city of Herat in western Afghanistan, although no Jews have lived in the area for decades.

Yu Aw synagogue in Herat’s old city is thought to have been built around the turn of the 20th century. The reports say a 16-month restoration project is being planned to save the synagogue from further decay and possible collapse. It is being planned by the Herat municipality and other local organisations, with almost $500,000 in funding from the Aliph Foundation, a Swiss group seeking to protect cultural heritage sites in conflict areas.

The project also includes repairs to the community mikvah or ritual Jewish bath, known as Hammam-e Mosaie. It was once used by Herat’s Jewish residents, who in the past numbered tens of thousands.

The Jewish buildings are in the Mahalla-yi Musahiya area of the city, known by local people as the ‘Neighbourhood of the Jews.’

It will be one of the first cultural conservation projects in the province since US troops were withdrawn and the Taliban overthrew the Western-supported government last year (2021). The synagogue last underwent restoration efforts in 2009, with funding from another Swiss organisation.

The head of Herat’s department for safeguarding historic monuments, Zalmay Safa, told The Art Newspaper, which first reported the story: ‘We want to prove that we are tolerant and accepting of one another, we seek peace, and we are not extremists. Despite the change in government, our historic sites remain protected and they are not in any way connected to religious matters.’

The Yu Aw synagogue, and three other synagogues were built around the same time. They are among the last remaining physical reminders of the presence of a Jewish community in Herat and its vibrant cultural life.

Herat once had tens of thousands of Jewish residents. But they began moving to Israel and the US after World War II. By the 1970s, the Jewish community had completely left.

Reports say there are four synagogues, a bath, and a cemetery in Herat, but so far only the Yu Aw Synagogue has been given protected status. Another synagogue was converted into a mosque, one is used as a school, and a third was heavily damaged in recent conflicts.

Although the latest project has not explicitly been presented as a ‘Jewish Heritage’ project, everyone is aware of the history of the building, and it is not seen as controversial, according to Jolyon Lesie, an adviser, the Afghan Cultural Heritage Consulting Organisation (ACHCO), a non-profit, apolitical, cultural organisation, an ACHCO, who spoke to The Art Newspaper.

Zalmay Safa, director of Herat’s department for the safeguarding of historic monuments, says: ‘This is a cultural and historic site, which is not used as a place of worship, and the local government will support its preservation. Despite the change in government our historic sites remain protected, and they are not in any way connected to religious matters.’

The last two Jewish people living in Afghanistan left a month after the Taliban took over last year. Zablon Simintov, also known as Zebulon Simentov, a former carpet trader and restaurateur, was born into an Orthodox Jewish family in Herat in 1959, and he spent most of his early life there until he moved to Kabul, where he was also the caretaker of the country’s only remaining synagogue.

After the death of Ishaq Levin at the age of 80 in 2005, Zablon Simintov was widely known as the only Jew still living in Afghanistan. However, when he left he left for Israel in September 2021, it was discovered that his distant cousin, Tova Moradi, was actually the last Jew living in Afghanistan. She too fled Afghanistan last year with 20 or so grandchildren, leaving for Albania in October 2021.