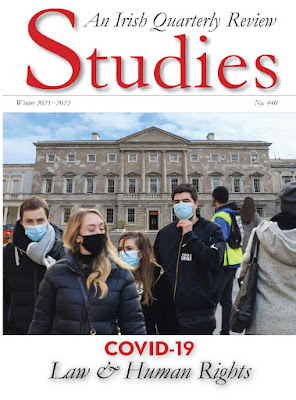 The current edition of ‘Studies’ includes my paper, ‘A Reflection on the Crises in Afghanistan following the Fall of Kabul’

I am honoured to find that my paper reflecting on the fall of Kabul and the Taliban takeover of Afghanistan is published in the current issue of Studies: An Irish Quarterly Review (Vol 110, No 440, Winter 2021, pp 458-469).

Studies is a scholarly quarterly Irish journal published by the Irish Jesuits through Messenger Publications. It was founded in 1912, and examines Irish social, political, cultural and economic issues in the light of Christian values and explores the Irish dimension in literature, history, philosophy and religion.

My paper in the current edition of Studies is ‘A Reflection on the Crises in Afghanistan following the Fall of Kabul.’

The fall of Kabul in recent months and the completion of the Taliban takeover of Afghanistan in August have created a multiplicity of crises and have had repercussions in many areas of life in Ireland.

In his editorial, the new editor of Studies, Dermot Roantree describes this as a ‘wide-ranging reflection on Afghanistan in the aftermath of the fall of Kabul.’ He adds: ‘What his fascinating stories, anecdotes, and historical explanations all serve to impress is that Afghanistan is very much more pluralist, complex, and culturally rich than people may imagine, and that it has always been part of the greater ‘Euro-Med’ world.’

This issue of Studies also includes a series of essays by the ‘COVID-19 Law and Human Rights Observatory,’ established by the Law School of Trinity College Dublin to analyse and explain Ireland’s legal response to the pandemic. These essays focus on some of the challenges that were navigated and the principle lessons to be learnt for the future, whether for a future public health crisis or more generally.

Alan Brady and James Rooney look at ‘Lockdowns and the Right to Education in Ireland’; Conor Casey and Oran Doyle examine ‘Law and Human Rights’; and Conor Casey, Oran Doyle and David Kenny write on ‘The Irish State’s COVID-19 Response and the Rule of Law: Causes for Concern.’ Professor Oran Doyle and Dr Conor Casey, provide a separate introduction to their work.

In her paper, Patricia Brazil looks at ‘Direct Provision in a Time of Pandemic.’ There are papers too by Hilary Hogan, Mark Bell, and Romy Dawson (‘Rural and Pastoral Themes in Heaney’s Poetry’). In his essay on ‘The ‘rapidification’ of modern life’, Professor Mark Bell draws attention to Pope Francis’s promotion of ‘integral ecology’ in Laudato Si’, specifically with respect to the need for rest and for creating quiet space for dialogue and ‘serene reflection’.

Father Bruce Bradley was the editor of Studies for 10 years, from 2011 until just a few months ago. Dermot Roantree is the first lay person to hold the post.

Studies was launched by the Irish Jesuits in March 1912, intended to reach as wide a readership as possible. Its first Foreword said its objective was to be ‘a Review which would give publicity to work of a scholarly type, extending over many important branches of study, and appealing to a wider circle of cultured readers than strictly specialist journals could be expected to reach’.

The journal had a distinctive Irish and religious viewpoint but the subjects it covered ranged widely, comprising – to cite the original prospectus once more – literature, history, philosophy, sociology, education and science. As Professor Bryan Fanning wrote in his recently published anthology of the best of Studies over its first century of publication, ‘In 1912 Catholic intentions hardly needed to be advertised’. It was to be ‘catholic’ in both senses.

The survival of Studies into a second century of existence makes it almost unique among Irish publications. Today, it describes its purpose as examining ‘Irish social, political, cultural and economic issues in the light of Christian values’ and exploring ‘the Irish dimension in literature, history, philosophy and religion.’