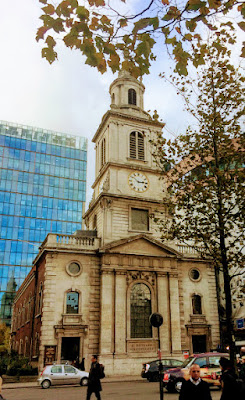 Saint Botolph-without-Bishopsgate is close to Liverpool Street Station and to the site of the original Bedlam (Photograph: Patrick Comerford, 2016)

During each working visit to London, I trying to visit churches that have a place in the history and church life of the city and that are if architectural interest. Last week, while I was walking back from the Royal Foundation of Saint Katharine in the East End to Liverpool Street station, I stopped to visit Saint Botolph-without-Bishopsgate, on the west side of Bishopsgate in the City of London.

Saint Botolph’s is open every day during the week and is committed to a welcoming and inclusive ministry in London’s financial centre.

I was first in Saint Botolph’s almost 10 years ago, for the introduction of the Revd Dr Alan McCormack as parish priest by the Bishop of London, Dr Richard Chartres, in 2007.

Alan invited me back to preach there in 2009 on the Feast of the Presentation of Christ in the Temple, at a lunchtime Service of Light. However, snow had fallen the previous night, blanketing most of England, preventing me from getting from Cambridge to London that morning, and cancelling my flight back to Dublin from Stansted that evening.

Saint Botolph’s is a living church in Bishopsgate in the heart of the City of London, between Liverpool Street Station and London Wall. Many Irish visitors pass it by, often not noticing the church as they emerge from Liverpool Street station and the express train from Stansted Airport.

Saint Botolph, who died around 680 AD, was an early East Anglian saint and the patron saint of travellers and wayfarers. So his name was an appropriate dedication for a church near a city gate. There were three other churches of Saint Botolph in mediaeval London, at Billingsgate, Aldgate and Aldersgate, and there is a Saint Botolph’s Church in Cambridge.

Christian worship on this site may date back to Roman times, although the earliest evidence is for an Anglo-Saxon church on this site.

The foundations of the original Saxon church were discovered when the present church was being built. The church is first mentioned as ‘Sancti Botolfi Extra Bishopesgate’ in 1212. It is mentioned again in 1247 in a deed of gift in which Simon FitzMary, Alderman and Sheriff, gave his land and houses to the Bishop of Bethlehem, the Italian Goffredo de Prefetti, to found the Priory of Saint Mary of Bethlehem north of the church.

In the Middle Ages, the site was just outside the city walls near the ‘Bishop’s Gate’ after which the street is named.

By 1403, ‘lunatic’ patients formed the majority of the patients at the Bethlehem, Bethlem or Bedlam, and so England’s first and most infamous mental hospital was born. After the suppression of monastic houses at the Reformation, the Priory of Saint Mary of Bethlehem became the Bethlehem Hospital for Lunatics.

The parish registers are complete from 1558, and they record the burials of many notable people, including an infant son of the playwright Ben Jonson.

The actor Edward Alleyn, Shakespeare’s contemporary and the founder of Dulwich College, was baptised here in 1566. Emilia Lanier, one of the women said to be Shakespeare’s ‘Dark Lady,’ was baptised Emilia Bassano in the church on 27 January 1569. She married Alfonso Lanier here on 18 October 1592.

Sir William Allen, Lord Mayor of London (1571-1572), who was born and buried in the parish, marked his time as Lord Mayor by repairing the church at his own expense.

Another celebrated parishioner was Sir Paul Pindar, James I’s Ambassador to Turkey. He died in 1650 and his epitaph reads that he was ‘faithful in negotiation, foreign and domestick, eminent for piety, charity, loyalty and prudence.’

The church survived the Great Fire of London in 1666, but only because the sexton’s house having been partly demolished to stop the spread of the flames.

Meanwhile, Bedlam continued to operate as a psychiatric hospital, although many of the patients in fact suffered from epilepsy, learning disabilities and dementia. Inside the squalid single-storey building that housed 12 cells, a kitchen, staff accommodation and an exercise yard, inmates were manacled and chained – and treated as a tourist attraction by Londoners who paid a penny to stare at them. Patients, usually poor, were given treatments including restraint, dousing with water, beatings and isolation.

In 1676, the Bethlehem Hospital or Bedlam, which had stood near the church for over 400 years, moved to Moorfields in 1676.

In 1708, Saint Botolph’s was described it as ‘an old church built of brick and stone, and rendered over.’ By then, the Gothic church had been altered with the addition of Tuscan columns supporting the roof, and Ionic ones the galleries. 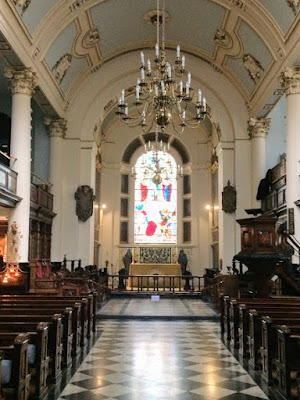 Inside Saint Botolph-without-Bishopsgate … the present church is the fourth on the site and was built in 1725-1729 (Photograph: Patrick Comerford, 2016)

In 1710, the parishioners petitioned parliament for permission to rebuild the church on another site, but nothing was done.

The architect was James Gold or Gould. During his building work, the foundations of the original Anglo-Saxon church were discovered.

To provide a striking frontage towards Bishopsgate, Gould placed the tower at the east end. This makes the church unique among the City churches in having its tower at the East End, with the chancel below. The ground floor of the tower, with a pediment on the exterior, forms the chancel.

The east end and the tower are faced with stone, while the rest of the church is brick, with stone dressings. Inside, the church is divided into nave and aisles by composite columns, and the nave is barrel vaulted. The parishioners soon complained that the church was too dark. To remedy this, a large west window was created, but the complaints must have been forgotten when this window this was largely obscured by the installation of the organ in front of it in 1764. 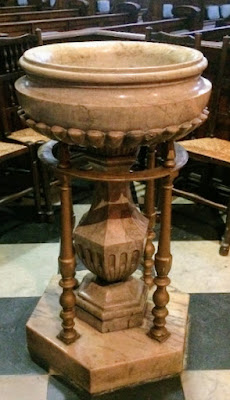 The font in Saint Botolph’s in which the poet John Keats was baptised (Photograph: Patrick Comerford, 2016)

In 1820 a lantern was added to the centre of the roof of the church.

Saint Botolph’s lost only one window during World War II, and the church was designated a Grade II* listed building on 4 January 1950. 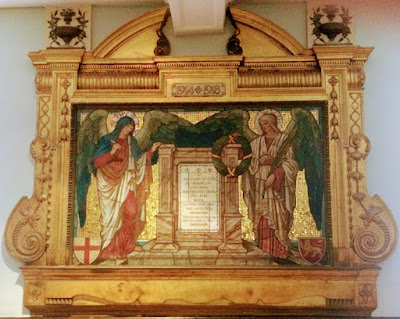 However, the Saint Mary Axe bomb in 1992 damaged the exterior joinery and windows. Then, on 24 April 1993, Saint Botolph’s was one of the many buildings damaged by an IRA bomb. The Bishopsgate bomb opened up the roof and left the church without any doors or windows. The building was classed as a dangerous structure and cordoned-off. The Rector’s office and the Vestry were shattered, causing papers and files to be scattered all over Bishopsgate.

An extensive restoration project took 3½ years to return the church to its former glory. The Worshipful Company of Bowyers traditionally holds its service of installation of a new master at Saint Botolph’s. Following the Saint Mary Axe and Bishopsgate bombings, the company commissioned a Memorial Window by Nicola Kantorowicz as part of the restoration. 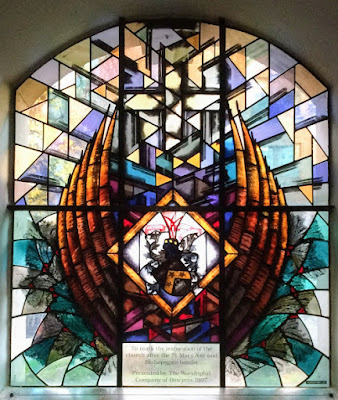 The Worshipful Company of Bowyers commissioned a window to mark the restorations of Saint Botolph’s after the Saint Mary Axe and Bishopsgate bombings (Photograph: Patrick Comerford, 2016)

The window combines yew leaves and the curve of a longbow. The design grows and moves upwards suggesting resurrection or rebirth. Its colours lend themselves to fire and light and the suggestion of a cross adds a further spiritual element.

A Thanksgiving Service was held in January 1997 to mark completion of this work, and the Bishop of London dedicated a new stained glass window that was commissioned by the Worshipful Company of Bowyers.

The Lady Chapel is set aside for private prayer and meditation. The church includes the regimental memorial chapel of the Honourable Artillery Company, the Book of Remembrance of the London Rifle Brigade, and a memorial for people with haemophilia who have died because of treatment with contaminated blood products.

The names of the Rectors from 1323 to the present day can be seen on the ledge of the gallery around the church. The satirist and essayist Stephen Gosson (1554-1624) was once rector of Saint Botolph’s, and several rectors went on to become Bishops of London, including Charles James Blomfield, Bishop of London (1828-1857).

William Rogers (Rector, 1863-1896), was a committed social reformer who devoted time and money to the education and welfare of his poor parishioners. He founded the Bishopsgate Institute, which carries on his ideals to this day, and also took a leading role in the reconstruction of Dulwich College. 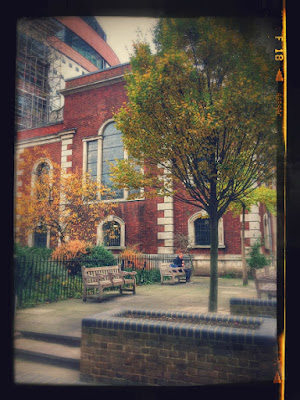 Saint Botolph’s was one of the first City burial grounds to be converted into a public garden (Photograph: Patrick Comerford, 2016)

The churchyard runs along the back of Wormwood Street, the former course of London Wall. Saint Botolph’s was the first of the City burial grounds to be converted into a public garden. At the time, the transformation caused much opposition, but today this space is much appreciated space by many people who find it a tranquil place.

One of the few surviving tombs in the churchyard is the large funeral memorial above the vault of Sir William Rawlins (1753-1838), Sherriff of London in 1801-1802 and a benefactor of the church. He was instrumental in forming the Eagle Insurance Company (later the Eagle Star) and continued to chair it until his death. 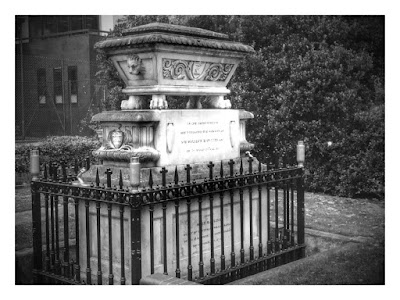 Close to the garden’s Bishopsgate entrance, the memorial cross is believed to be the first World War I memorial in England. It was erected in 1916 after the Battle of Jutland and the death of Lord Kitchener.

The church hall in the churchyard is a Grade II listed building. This is the former Hall of the Worshipful Company of Fan Makers. It was once used as an infants’ school, but is now a multi-purpose church hall and is available for hire.

It is a single-storey classical building of red brick and Portland stone. At its front entrance is a pair of niches filled with painted Coade stone figures of a charity schoolboy and schoolgirl in early 19th century costumes.

Within the bounds of the former churchyard but standing alone on the pavement is a former Turkish bath designed by the architect Harold Elphick for the Victorian entrepreneurs Henry and James Forder Nevill who owned other Turkish baths in Victorian London. It opened in 1895 and is now a private venue available to hire for private events.

The parish is currently in an interregnum. The honorary assistant priest is the Revd Dr John Turner, and the priest missioner is the Revd Andrew Williams.

The church is open every weekday from 7.30am to 5.30pm and the regular services include the Eucharist celebrated at lunchtime every Wednesday (1.10pm) and Thursday (12.10 pm). The Wednesday Eucharist involves music and includes a sermon; the Thursday Eucharist is marked by words and silence. Both services are timed to last no longer than 50 minutes so those who attend can be back in their offices immediately after lunch.

The Orthodox Parish of Saint Botolph in London, which worships here on Sundays, is part of the Antiochian Orthodox Archdiocese of the British Isles and Ireland. The parish priest is my friend Father Alexander Tefft , and the Divine Liturgy is celebrated here in English every Sunday at 11 am, preceded by abbreviated Othros at 10.30 am.

Meanwhile, the name of Old Bedlam was changed to Liverpool Street and the original location of Bedlam within the parish of Saint Botolph in Bishopsgate ward, just beyond London’s wall, is now the south-east corner of Liverpool Street Station. 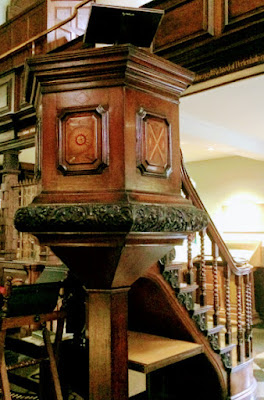