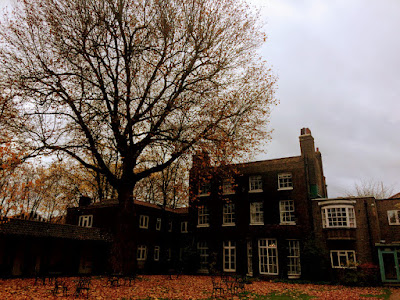 Autumn turns to winter in the grounds of the Royal Foundation of Saint Katharine (Photograph: Patrick Comerford, 2016)

I am staying for two days at the Royal Foundation of Saint Katharine in the East End of London during a residential meeting of the trustees of USPG, the Anglican mission agency.

Saint Katharine’s stands at the East End crossroads connecting the communities of Stepney, Shadwell and Limehouse, close to the site of the old docks. I am just a few steps from Cable Street, the scene of a famous street battle 80 years ago between Oswald Moseley’s fascists and the East End communities who protected the local Jewish people against racist taunts and assaults in 1936.

This is my first time in Saint Katharine’s, which offers visitors a place of transforming calm for people who are in London on a short stay, on a business trip, or here for a personal retreat and who this as a unique alternative to London hotels.

Despite these busy two days, this is a relaxing place to stay, with a peaceful environment. The garden is home to undisturbed wildlife, with blackbirds, wood pigeons in the sheltered spaces. In the rose garden, there is a rose bush planted by Queen Elizabeth II during her last visit. This setting is enhanced by the lounge, conservatory, garden and small library.

For 678 years, the Foundation carried on its work in East London. In the 15th century, its musical reputation rivalled that of Saint Paul’s Cathedral, and in 1442 it was granted a Charter of Privileges. This charter made Saint Katharine’s and its precinct, extending to 23-acre (93,000 square metre) a Liberty with its own prison, officers and court, all outside the ecclesiastical and civil jurisdiction of the City of London.

Its status as a Liberty and the fact it was personally owned and protected by the Queen Mother, meant that Saint Katharine’s was not dissolved along with the monastic houses at the Reformation.

By the 16th century, there were 1,000 houses, including a brewery in the precinct, where the residents included foreigners, vagabonds and prostitutes. These people were crammed into houses along narrow lanes that had names such as Dark Entry, Cat’s Hole, Shovel Alley, Rookery and Pillory Lane. Many were in poor repair, and John Stow’s Survey of London in 1598 described them as ‘small tenements and homely cottages, having as inhabitants, English and strangers [i.e. foreigners], more in number than some city in England.’

The restrictions and rules of the London City guild did not apply here, and so foreign craftsmen were attracted to the Liberty, along with many seamen and rivermen. Despite this high population density, the mortality rate in the Liberty during the Great Plague was half of the rate in areas to the north and east of the City of London.

The continuing establishment of lay brothers and sisters seems to have drawn hostile attention from extreme Protestants, and during the Gordon Riots in 1780 Saint Katharine’s was saved from being burned down by the mob.

In 1825, commercial pressure for larger docks up-river led to Saint Katharine’s, with its 14th and 15th century buildings and some 3,000 inhabitants, being demolished to provide a dock close to the heart of the City. The land was excavated and flooded to form a new dock. This was the smallest of London’s docks and was named Saint Katharine Docks.

Saint Katharine’s by the Tower was grouped into the Whitechapel District in 1855 and became a civil parish in 1866 when its extra-parochial status ended, following the Poor Law Amendment Act 1866. The parish became part of the County of London in 1889. In 1895 it was abolished as a parish and combined with Saint Botolph without Aldgate.

Meanwhile, the institution, now called the Royal Foundation of Saint Katharine’s, moved to Regent’s Park, where it took the form of almshouses, and continued for 125 years. 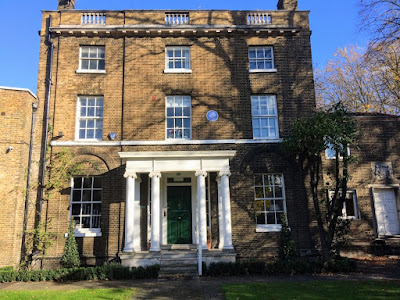 After World War II, Saint Katharine’s finally moved back to its spiritual home in the East End in 1948, moving onto the site in Limehouse once occupied by Saint James’s Church, Ratcliff, which had been destroyed in the Blitz. It was just a mile from the original site, and the former chapel at Regent’s Park later became the Danish Seamen’s Church. 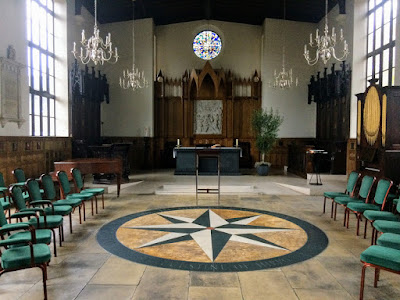 The re-ordered chapel in the Royal Foundation of Saint Katharine (Photograph: Patrick Comerford, 2016)

The re-ordered chapel is the centrepiece of retreat and reflection, gracefully knitted into the fabric connecting the Georgian house with the retreat and conference centre.

Last year, the Foundation opened Saint Katharine’s Precinct, a community project made entirely from shipping containers and yurts that will be recycled at the end of the project. The new facilities include a Well-being Hub, London’s first Yurt café and reflective space and artist studios in partnership with Bow Arts.

The Foundation is committed to Worship, Hospitality and Service. The vast majority of meetings and conferences here benefit from subsidised rates for Church-based organisations and for the not-for-profit sector, and thousands of people stay here each year during conferences, on personal retreats, or as an alternative to busy London hotels.

The Foundation is ranked 10 out of 665 places to stay in London as part of the ‘speciality lodgings’ category on Tripadvisor, and was recently included in Alastair Sawday’s ‘Special Places to Stay.’ 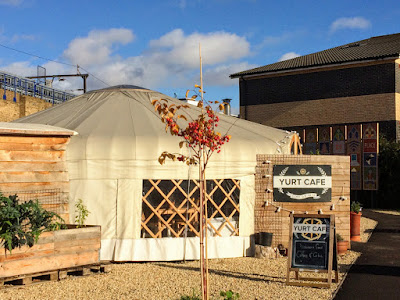