What is a Victorian bath house
doing in Bishopsgate churchyard? 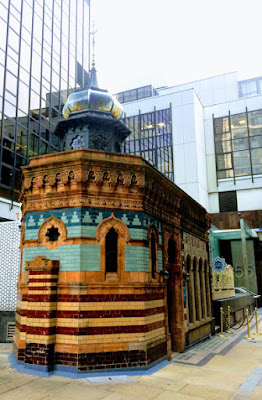 The Victorian bath-house in Bishopsgate churchyard looks like a Victorian fantasy inspired by an Arabesque mosque (Photograph: Patrick Comerford, 2016)

Perhaps the most unusual building I came across during my visit to London this week was the former Turkish baths in Bishopsgate Churchyard, just off New Broad Street and close to Liverpool Street Station.

From the outside, the bath-house looks like a Victorian fantasy of an imaginary Arabesque mosque, and even has a star and crescent placed above a miniature minaret.

But this is not a mosque. Although the present bathhouse dates from 1895, there have been baths on this site in Bishopsgate Churchyard for almost two centuries, since 1817.

By 1847, Dr Robert James Culverwell was providing medical baths here, and in 1848 he opened baths in Argyll Place, off Oxford Circus. Both establishments were known as the Argyll Baths. When he died in 1852, his widow, Ann Eliza Culverwell, continued to operate the business for about eight years or so.

By March 1860, the establishment was owned by Argyll Baths, who added Turkish baths and renamed the place New Broad Street Turkish Baths. By 1883, they were owned by Jones & Co, who refurbished the baths in 1885.

The baths were open from 7 a.m. to 9 p.m., and a ‘plain hot-air bath, with shower’ cost 3s.6d and the ‘complete process’ cost 4 shillings. Other services available included perfumed vapour, Russian vapour, Vichy, and sulphur vapour baths. There were scented showers, and ascending, descending and spinal douches.

Jones and Co sold probably sold their baths around 1886-1889, and the New Broad Street baths were bought by the Victorian entrepreneurs Henry and James Forder Nevill as a going concern. They had already built specially designed baths in Northumberland Avenue in 1884, and they decided to close and demolish the old baths in Bishopsgate and to build new premises.

The building was designed by G Harold Elphick, who is said to have been inspired by a shrine forming part of the Church of the Holy Sepulchre in Jerusalem. He designed this place using tessellating Arabic motifs in classic colours.

The new building was opened by City of London Alderman Treloar on 5 February 1895. Many of the streets in the area had different names then, and the main entrance to the baths was in Alderman’s Walk, now Bishopsgate Churchyard.

Architectural journals praised both the overall decorative scheme and the quality of fittings, and also the imaginative way in which a very small ground level area was utilised. The site was narrow and the building had to fit between two 19th century office buildings – now long gone. 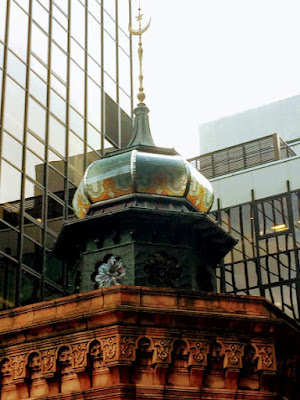 The former Turkish bath-house has a star and crescent symbol on top of a miniature minaret (Photograph: Patrick Comerford, 2016)

The Moorish pavilion at street level is the entrance to the bath-house below, where various side rooms offered shampooing and steaming. The baths were partly underneath the original New Broad Street House, which has since been demolished, and partly underneath Alderman’s Walk. The entrance forms part of a kiosk in the upper portion of which were water tanks, masked by a Moorish style wall, and surmounted by a similarly styled onion shaped cupola, decorated with a star and crescent.

Throughout the building, the walls, beams, and columns are encased with faïence and tile-work. Even the joints are worked in to form part of the design, the tiles being made in various interlocking shapes, in the Moorish manner, for this purpose.

They were specially made at Jackfield in the Ironbridge Gorge, Shropshire, by Craven Dunnill to the designs of the architect, Harold Elphick, who had the shape of his interlocking tiles registered.

At the top of the oak staircase leading to the baths below, and throughout the relaxation areas, were walnut screens with panels of coloured leaded glass in peacock blue and gold.

The cooling-room was decorated in the style of the Alhambra in Spain. A fountain of cold filtered water, with a Doulton basin, reinforced the Moorish ambience of the interior.

The room was divided into a series of divans, or cubicles, each of which was provided with couches, an elaborate mirror, and an occasional table. The ceiling was clad in cream tinted panels with coloured borders, and the floors were covered with soft richly patterned carpets.

The baths managed to survive the London Blitz in the 1940s, and remained open until 1954. But he number of bathers using the baths had been declining steadily since 1950, and when the lease expired and the Nevill company decided not to renew it.

The baths closed in 1954, and over the decades, the Grade II-listed building was used for restaurants, a nightclub, a pizza house and as storage space. But, despite these changes, this intriguing and captivating building managed to survive through the massive office redevelopment projects of the last decades of the 20th century, and it reopened as the Victorian Bath House earlier this year [April 2016].

The Victorian Bath House is now managed by the Camm and Hooper chain as a venue private and corporate events. The Grade II listed space hosts standing receptions for up to 150 guests and seated breakfast, lunch, dinner and private groups of 20-150 guests.

However, I did not get inside the building on Friday evening. The bar is open by appointment only from Thursdays to Saturdays. But the building stands out among the modern, uninspiring office blocks that surround it. 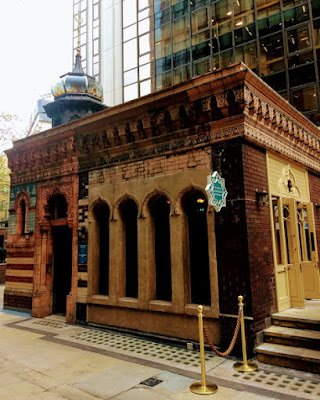 The Moorish pavilion at street level is the entrance to the bath-house below (Photograph: Patrick Comerford, 2016)