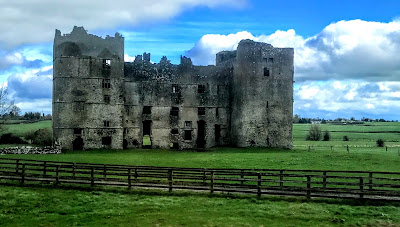 Loughmoe Castle … a sight to behold beside the railway line, between Thurles and Templemore (Photograph: Patrick Comerford, 2019)

On my regular train journeys between Limerick and Dublin, I never cease to be amazed by the sight of Loughmoe Castle, which stands out by the tracks in rich green pastures, between Templemore and Thurles railway stations.

Loughmoe Castle is a 15th century tower house that was extensively added to in the 17th century. The castle was home to the Purcell family, who were given the palatinate title of Baron of Loughmoe by the Butlers, Earls of Ormonde.

The village near the castle is now known incorrectly as Loughmore, which would mean the ‘Big Lake.’ But the original Irish name is of the area is Luach Mhagh, meaning ‘the field of the reward.’ This name alludes to the legend of how the Purcells first gained possession of this area.

Many years ago, the story says, a king lived in Loughmoe Castle, and the densely wooded land around it was terrorised by a boar and sow of gigantic size, who uprooted crops and killed anyone and everyone they encountered.

To rid the countryside of these beasts, the king offered their slayer the hand of his daughter, the Castle of Loughmoe and the vast lands around it.

After all other hunters had tried and failed, a young man named Purcell set out to stalk the beasts. He made his way through the forest by leaping from branch to branch, until he finally reached the spot where the creatures lay. With his bow he peppered them with arrows from above, but to no avail. Finally, two of his shots went into the mouths of beasts, who fled in pain and terror. They were later found dead near Thurles, and Purcell claimed his generous prize.

The area in which the castle stands is known as ‘the field of the reward,’ referring to the Purcell’s royal rewards, and the legend is alluded to in the Purcell family coat of arms, which depicts the heads of four boars.

The true story of how the Purcell family came to Loughmoe is less romantic.

Hugh Purcell accompanied Strongbow’s army to Ireland in 1169. Shortly before 1200, his son, also Hugh, arrived in Loughmoe. Through his marriage with a member of the Butler family, Hugh acquired lands in Loughmoe.

Sir Hugh Purcell founded a Monastery of Franciscans or Grey Friars in Waterford in 1241.

After the Butlers established the Palatinate of Tipperary in 1328, the Purcells were created ‘Palatinate’ Barons of Loughmoe. It was not a peerage title, but more of an hereditary honorific, like the titles of the Knights of Glin and the Knights of Kerry, or the supposed title of Baron of Danganmore associated with the Comerford family. 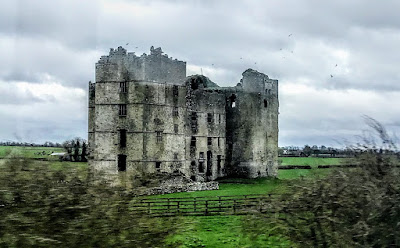 Loughmoe Castle is a 15th century tower house to which a 17th century fortified house has been added (Photograph: Patrick Comerford, 2019)

Loughmoe Castle is situated between the railway line and the River Suir. ‘The magnificent remains,’ as John O’Donovan described them in 1840, comprise an earlier tower-house and a later mansion house.

Although it looks like one large castle, it is actually a 15th century tower house to which a 17th century fortified house has been added, which makes it look like an H-plan house.

Loughmoe Castle is four storeys high in the middle block, with an attic and semi basement, while the newer towers at either end are five storeys high. The roof probably had dormer windows that provided light for the top rooms. There are many mullioned windows, each containing six, eight or 12 panels.

The castle has some fine, large fireplaces, of which the most ornate and interesting are on the first floor of the old tower. This has a moulded stone frame with leaf-work carving and two shields at each end. Two of these are defaced, but the other two depict the heraldic arms of the Purcell and Butler families, who intermarried on several occasions over the generations.

The tower house was much modified in keeping with the later 17th century portion, but it can be clearly identified with its rounded corners, gun loops and machicolations. It is said there is a hidden prison chamber on the top floor.

The basement floor is now missing but the level of the floor can still be made out.

During the Jacobite and Williamite wars in the late 17th century, the Purcells sided James II and the last Baron of Loughmoe, Nicholas Purcell (1651-1723), fought at the battles of the Boyle and Aughrim and signed the Treaty of Limerick. He did not flee Ireland, unlike other ‘Wild Geese,’ after the wars, but chose to stay in Ireland. Because of their support for the 1641 rebellion and the Jacobite cause, the Purcells temporarily lost their estates. However, on each occasion, they succeeded in regaining Loughmoe Castle, possibly because of their kinship with the Ormonde Butlers.

The wealth and influence of the Barons of Loughmoe waned during the early 18th century, and considerable portions of the estate were sold to meet mounting debts.

The last Baron of Loughmoe, Nicholas Purcell, was a maternal nephew of James Butler, 1st Duke of Ormonde. Nicholas died without male heirs on 24 March 1723, and the estate was divided between his sisters and daughters. The Purcell-Whites were the last to live in Loughmoe Caastle, and remained there until about1760.

The English composer Henry Purcell (1659-1695) is said to be related to the Purcell family of Loughmoe. He was the son of Henry Purcell, who is said to have been born in Ireland, and the grandson of Thomas Purcell of Gortanny and Ballyross, Co Tipperary.

The Loughmoe part of the estate was sold to the Goolds in 1787, then parts of it to George Adair in 1857, to the Cardens in 1875 and then under the 1923 Land Act to the Land Commission. The Land Commission conveyed the freehold on favourable terms to former tenants. Loughmoe Castle is now in the care of the Office of Public Works.

I am particularly interested in Loughmoe Castle because my direct ancestors include Mary Purcell, a daughter of Thomas Purcell of Loughmoe Castle, and her husband, Richard Comerford ‘fitzThomas’ (1564-1637), of Ballybur Castle, Co Kilkenny.

Richard Comerford of Ballybur Castle then married his second wife Mary, a daughter of Thomas Purcell (1538-1609) of Loughmoe Castle.

Richard’s will, dated 21 April 1637, was witnessed by his first cousin, Richard Comerford of Danganmore, Peter Rothe, Walter Butler and James Purcell, his brother-in-law. He died on 15 June 1637, aged 73, and was buried according to his will in Grange Church, near Desart, Co Kilkenny.

4.14: The surviving fraction of the wayside cross dedicated to Richard and Mary Comerford was inserted in the north-west corner of Grange Church by Michael Comerford and others in the late 19th century (Photograph: Patrick Comerford)

Two monuments in Cuffesgrange, Co Kilkenny, commemorated Richard and Mary (Purcell) Comerford, a wayside cross and an altar tomb. The remaining base of the wayside cross was later inserted in the masonry of the north-west corner of the parish church in Cuffesgrange. This fraction was covered in cement when Carrigan visited Grange in the early 20th century, but is now clearly visible. It reads:

[Pray for the souls of] Rich[ard] Comerford of Ballybur, Knight, and of Mrs Mary Purcell, his wife, both of whom had this cross erected in honour of the Holy Cross of our Lord, 20 July ...

The second monument in the graveyard in Grange was an altar-tomb with an ornamental reredos and Latin inscription, which was re-erected in 1869 by the Kilkenny historians John Hogan of Ormond House, Kilkenny, and William Healy, and the Carlow historian, Bishop Michael Comerford (1831-1895), a founder member of the Ossory Archaeological Society. The inscription reads:

To God Omnipotent, Most High,
Sacred.
A monument of love and death. Richard Comerford, Esquire, Lord of Ballybur, a man truly pious, upright, prudent, valiant, having fulfilled various offices of state in peace and war with strictest rectitude, died on 15 June 1637. Mary Purcell erected [this monument] to Richard, her most beloved husband, herself and children. Mary Purcell died ... Traveller, pray piously for the departed.

Richard and Mary Comerford had three sons and eleven daughters. Their second but eldest surviving son, John Comerford (ca 1598-ca 1667), who inherited Ballybur and the other family estates.

John was the last Comerford to live at Ballybur Castle and, despite his kinship with the Ormonde Butlers, and unlike the Purcells of Loughmoe, he never recovered his castle and estates after the wars and po9litical turmoil of the 1640s and 1650s. He is my direct ancestor through his descendants who moved first to north Co Kilkenny and then to north Co Wexford. 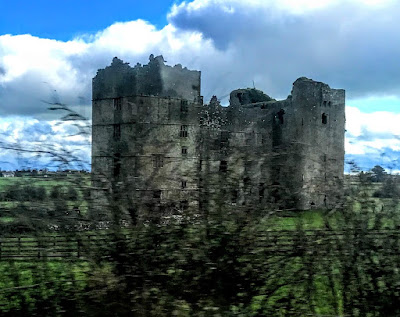