12 outstanding women
scientists and academics
make their mark in Dublin 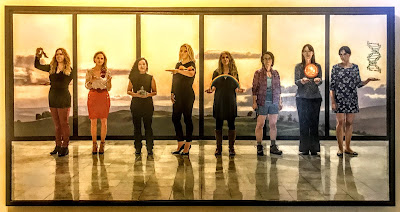 When I was at the launch of the new book Marriage and the Irish in the Royal Irish Academy in Dublin two weeks ago [18 June 2019], I also took time to appreciate the five portraits in the ‘Women on Walls’ exhibition in the academy house in Dawson Street, Dublin.

This exhibition is part of a campaign by Accenture in partnership with the RIA to make women leaders visible through a series of commissioned portraits, creating a lasting cultural legacy for Ireland.

Four of these portraits, painted by artist Vera Klute, depict four academics and scientists who were the first female elected members of the Royal Irish Academy in 1949. They were pioneers in their fields which included mathematical physics, Irish art history, plant viruses and classical Irish literature.

The fifth painting is a group portrait by Blaise Smith of eight contemporary female scientists who are recipients of European Research Council Starter Grants (2012-2015). These eight scientists were chosen as representatives of outstanding female scientists working in Ireland today. Their areas of expertise include light and solar panels, genetics, human aging, immunology and bio medical engineering among others.

The artist Blaise Smith says: 'A group portrait is always interesting because you have to capture the individuals and their personalities but also make the painting of the group work … as the painter chosen to do it, I feel privileged to be given this responsibility.’

These eminent women academics and scientists mark the positive change that has happened in Irish society over the last 100 years.

Vera Klute, who painted the first women elected as members of the Royal Irish Academy in 1949, said: ‘Each of the women have strong personalities and also very distinct features, which makes this project artistically interesting … It is a challenge to create a good likeness from very limited photographic material.’

Laura Mahoney, Chief Executive of the Royal Irish Academy, says the RIA ‘wants to create role models to inspire our future generations. The people of Ireland should know of, and be proud of, the 12 extraordinary women whose portraits will hang on the walls of Academy House for years to come.’

The eight women in the group portrait by Blaise Smith are (from left in the portrait):

Professor Emma Teeling (UCD) is a world authority on bat genetics. She studies bats for insights into human diseases such as blindness and deafness as well as aging.

Professor Catríona Lally (TCD) is the principal investigator on a project focusing on developing a means of early diagnosis of degenerative cardiovascular diseases. These studies are highly relevant to stroke patients and patients with vascular disease.

Professor Debra Laefer (UCD) aims in her research to prevent damage to buildings above tunnel excavation, by developing a 3D modelling system that can predict what buildings are most likely to sustain damage during tunnelling.

Professor Lydia Lynch (TCD and Harvard Medical School) has found in her research that a type of anti-tumour immune cell protects against obesity and the metabolic syndrome that leads to diabetes. Results showing that immune cells known to be protective against malignancy called invariant natural killer T-cells (iNKT), that are lost when people become obese, can be restored through weight loss.

Her work has also shown that therapies that activate iNKT cells could help manage obesity, diabetes and metabolic disease.

Her ERC research project Biowater aims to uncover new knowledge on the interactions between water and biomaterials in order to understand processes involved in biocompatibility, biofouling and biodegradation.

Dr Maria McNamara (UCC) is a world expert on the fossilisation of colour in animals and has conducted ground-breaking work on the evolution of feathers in dinosaurs. She and her team have made a landmark discovery: the first example of a dinosaur that had both scales and feathers. The team found remains of a plant-eating dinosaur, known as Kulindadromeus zabaikalicus, the first example found of a herbivore dinosaur to have both feathers and scales, and adds credence to the theory that all dinosaurs may have been feathered.

Professor Sarah McCormack (TCD) in her research explores photovoltaic panels that convert solar energy into direct current electricity. Applying these panels to buildings is important in achieving 20% renewable energy targets by 2020. This disruptive photovoltaic technology would ensure dramatic reduced costs and increases in efficiency, helping to define and promote the EU and global solar agenda.

Professor Aoife McLysaght (TCD) is one of Ireland’s leading geneticists and was on the team that analysed the initial sequence of the human genome in 2001. She was also involved in a major discovery about how genes are formed.

The first four women elected members of the RIA in 1949 are: 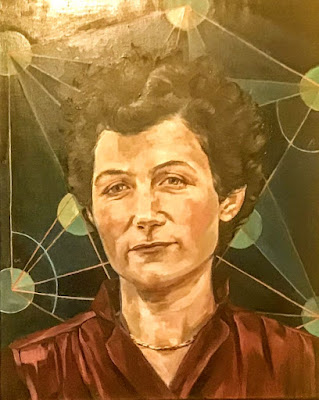 The portrait of Sheila Tinney by Vera Klute in the Royal Irish Academy (Photograph: Patrick Comerford, 2019)

Sheila Tinney (1918-2010) was born Sheila Christina Power in Galway, where her father, Michael Power or Mícheál de Paor was Professor of Mathematics at University College Galway, now NUI Galway. She was just one of eight girls to sit an honours mathematics paper in the Leaving Certificate in her year alongside 126 boys. It is believed she was the first Irish woman to receive a PhD in mathematics.

She was a pioneering academic in mathematical physics. She was described by the Nobel Laureate Erwin Schrödinger as ‘among the best equipped and most successful of the younger generation of physicists in this country.’

Her published papers covered a range of topics from crystal lattices to wave mechanics, and she worked with great scientific figures such as Schrödinger, Yukawa and Heitler. She spent time at Princeton University in 1948, when Einstein was still teaching and Oppenheimer was director. She retuned to Ireland and became Associate Professor of mathematical physics at University College Dublin in 1966.There she gained a reputation as a strong role model for young female academics. 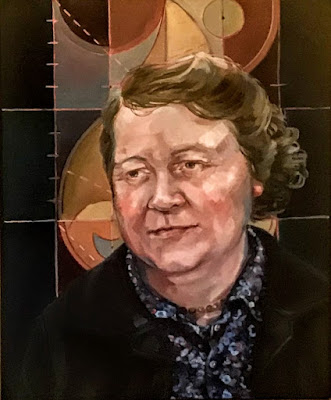 The portrait of Françoise Henry by Vera Klute in the Royal Irish Academy (Photograph: Patrick Comerford, 2019)

Dr Françoise Henry (1902-1982) was one of the most important 20th-century historians of Irish art. She trained at the École du Louvre and the Sorbonne, establishing herself as an expert on very early forms of sculptural decoration, particularly in Early Christian Irish Art.

A visit to Ireland in 1926 inspired her doctoral thesis and her subsequent life’s work. Her noted works include Early Christian Irish Art (1954) and Irish High Crosses (1964), but her significant legacy to the history of Irish illumination is her final study of the Book of Kells (1974), which remains her most acclaimed work. 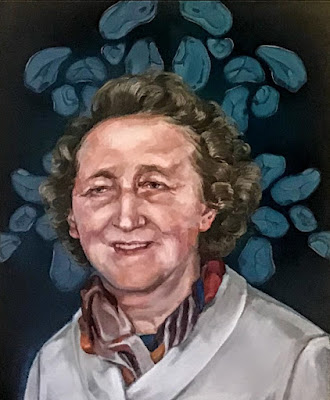 The portrait of Phyllis Clinch by Vera Klute in the Royal Irish Academy (Photograph: Patrick Comerford, 2019)

Professor Phyllis Clinch (1901-1984) from Rathgar was an award-winning scientist and one of the greatest female inventors of her generation. She was world renowned for her innovative research into plant viruses. She graduated first in her class in University College Dublin in chemistry and botany in 1923, won a postgraduate scholarship and completed her PhD while working with Alexandre Guillermond at the Sorbonne.

She gained international fame in the 1930s for revealing complex viruses in the potato. In 1961, she became the first woman professor of botany at UCD and the first woman to receive the Boyle Medal of the Royal Dublin Society in recognition of her scientific achievements. She was known to generations of students by the respectful nickname ‘Auntie Phyll.’ 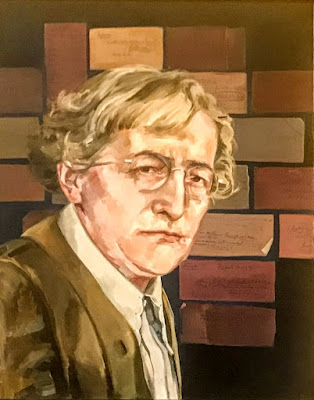 The portrait of Eleanor Knott by Vera Klute in the Royal Irish Academy (Photograph: Patrick Comerford, 2019)

Professor Eleanor Knott (1886-1975) from Ranelagh was a ‘pathbreaking’ researcher of classical Irish literature. Having taught herself to read modern Irish, she went on to study old Irish at the School of Irish Learning in Dublin and won a scholarship to continue her studies in 1907.

She joined the staff of the Royal Irish Academy in 1911. She published many scholarly articles and was the joint editor of Ériu, a leading academic journal of Irish language studies. She became a lecturer in Celtic language at Trinity College Dublin in 1928 and became Professor of Early Irish in 1939. She also received an honorary DLitt from the National University of Ireland.

All five portraits of these 12 outstanding women are now on permanent display at the Royal Irish Academy, and members of the public are welcome to visit the RIA to see them. Laura Mahoney hopes people will come into RIA house in Dawson Street, Dublin, ‘to see these portraits and find out about these women and their work.’ 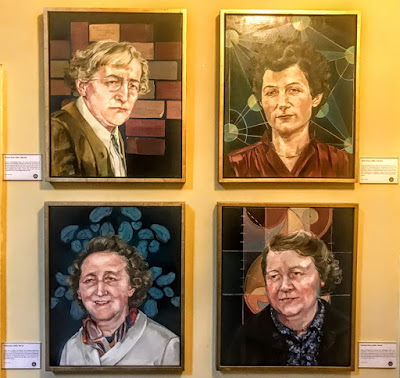 The portraits by Vera Klute of the first four women elected Members of the Royal Irish Academy (Photograph: Patrick Comerford, 2019)