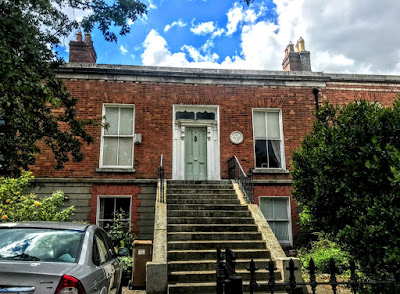 During a recent stroll through Rathgar on my way to work on some research at the Representative Church Body Library, I passed the home at No 17 Rathgar Avenue of George Russell (Æ).

Although Russell is now often forgotten as a poet and writer, he one of the important figures in the Irish Literary Renaissance. He was a poet, writer, editor and critic, but was also an acclaimed painter, a founder with Sir Horace Plunkett of the Co-Operative movement, and in the 1930 advised Franklin D Roosevelt on his ‘New Deal.’

George William Russell, who wrote with the pseudonym Æ (sometimes written AE or A.E.), was born in Lurgan, Co Armagh, on 10 April 1867, the second son of Thomas Russell and Mary Armstrong. His father worked for Thomas Bell and Co, linen drapers, and the family moved to Dublin when George was an 11-year-old.

In Dublin, he went to school at Rathmines School, run by the Revd Dr Charles Benson. Later, he went to the Metropolitan School of Art, where he began his friendship with the poet William Butler Yeats. In the 1880s, Russell lived at the Theosophical Society lodge at 3 Upper Ely Place, sharing rooms with HM Magee.

Russell began working as a draper’s clerk, then worked for many years for the Irish Agricultural Organisation Society (IAOS), an agricultural co-operative society founded by Sir Horace Plunkett in 1894. Plunkett needed an able organiser in 1897, and Yeats suggested Russell.

Russell travelled throughout Ireland, speaking on behalf of the IAOS, helping set up credit societies and establishing Co-operative Banks.

He used the pseudonym ‘AE’ or ‘Æ,’ derived from an earlier Æon, signifying the lifelong human quest subsequently abbreviated. His first book of poems, Homeward: Songs by the Way (1894), established his place as a key figure in the Irish Literary Revival.

When Lord Curzon was the Viceroy of India (1899-1905), he said that whenever he was feeling ill from the tropical heat. he would cure himself by reading Russell’s poems.

Russell moved to 25 Coulson Avenue, Rathgar, in 1900. He met James Joyce in 1902 and introduced him to other Irish literary figures, including William Butler Yeats. He appears as a character in the ‘Scylla and Charybdis’ episode in Joyce’s Ulysses, where he dismisses Stephen Dedalus for his theories on Shakespeare. Dedalus borrows money from him and then remarks: ‘A.E.I.O.U.’

Russell moved around the corner to 17 Rathgar Avenue in early 1906. He was living there with his wife Violet and their sons, Bryan and Diarmuid, during the 1911 census. Under the heading ‘occupation,’ he wrote ‘artist and writer,’ with the words ‘oil paintings’ added underneath as if to affirm this statement.

During the 1913 Dublin Lock-out, he wrote an open letter to The Irish Times, criticising the attitude of the employers. He accused the employers of ‘refusing to consider any solution except that fixed by their pride’ and he accused them of seeking ‘in cold anger to starve one-third of this city, to break the manhood of the men by the sight of the suffering of their wives and the hunger of their children.’

His collected poems were published in 1913.

As a pacifist, Russell had no sympathy for the aims of the Easter Rising or the methods chosen the leaders of the rising. Yet he was deeply moved by the deaths of the leading rebels, and wrote of them in his poem ‘To the memory of some I knew who are dead and loved Ireland’ (1917):

And yet my spirit rose in pride
Refashioning in burnished gold
The images of those who died
Or were shut up in penal cell
Here’s to you Pearse, your dream, not mine
And yet the thought – for this you fell
Has turned life’s water into wine.

Russell was an independent delegate to the Irish Convention in 1917-1918, when he opposed John Redmond’s compromise on Home Rule. He became involved in the anti-partition Irish Dominion League, which was founded by Plunkett 100 years ago in 1919.

His house at 17 Rathgar Avenue became a meeting-place for people interested in the economic and artistic future of Ireland, and his Sunday evenings ‘at home’ became a fixture in Dublin literary life.

Frank O’Connor called him ‘the man who was the father to three generations of Irish writers.’ Patrick Kavanagh called him ‘a great and holy man.’ He also influenced PL Travers, the writer who created Mary Poppins.

Although a second edition of his poems was published in 1926, he had never earned much from his paintings or books, and when the Irish Statesman folded in 1930 he was without a job and faced poverty. But a fund-raising effort by friends and supporters allowed him to visit the US, where his books sold in large numbers.

Russell became increasingly disillusioned with the Irish Free State and the New Ireland. Soon after his wife Violet died, he sold his house at 17 Rathgar Avenue in 1932, gave away most of his possessions, and left Ireland. His move to London was arranged by Charles Weekes, and he settled at 41 Sussex Gardens.

Despite failing health, he went on a final lecture tour in the US, but returned physically and mentally exhausted. He moved to 14 Tavistock Place, London, on 16 March 1935. He signed his last will on 14 June 1935, leaving everything to his second son. He died of cancer at Havenhurst nursing home in Bournemouth on 17 July 1935. CP Curran, Charles Weekes, Oliver St John Gogarty and WK Magee (John Eglinton) were at his bedside.

James Stephens, Helen Waddell and others accompanied his coffin to Holyhead. His Anglican funeral in Dublin on 19 July was attended by Eamon de Valera, WT Cosgave, WB Yeats, and other leading figures in Irish public life.

The oration was delivered by Frank O’Connor, Yeats having declined because he would ‘have to speak the truth.’ He was buried in Mount Jerome Cemetery, Harold’s Cross, following a mile-long procession.

The commemorative plaque was unveiled at his former home at 17 Rathgar Avenue in 1965. 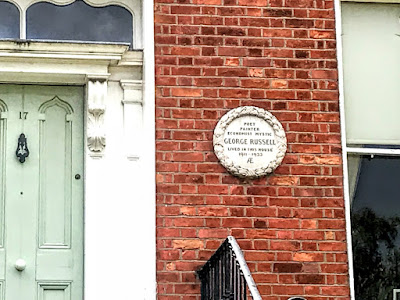