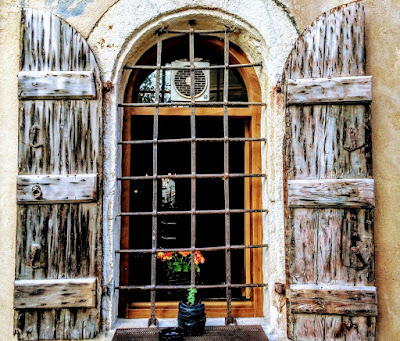 Now that we are well into the first week of July, I have found myself listening again to a Greek poem and song associated with this month.

‘The Blood of Love’ (Της αγάπης αίματα) is Ode 10 in Το Άξιον Εστί (To Axion Esti, It is Worthy), the epic poem that won the Nobel Prize for Literature for the Greek poet Odysseus Elytis in 1979.

By 1979, The Axion Esti had already been set to music in 1964 by the Greek composer, Mikis Theodorakis, and the poem had been taken to heart by lovers and revolutionaries alike, particularly during the resistance to the colonels’ regime.

Both Elytis and Theodorakis were born in Crete and were major figures in Greek culture throughout the second half of the 20th century. The only other Greek poet to receive the Nobel Prize for Literature was George Seferis in 1967. Nikos Kazantzakis (1883-1957), who was also born in Crete, received Nobel nominations on nine separate occasions, but never received the honour.

Elytis’ poems are written in rich language, filled with images from history and myths. His lines are long and musical, inspired by the Greek light, the sea, and the air.

Mikis Theodorakis was especially drawn to the work of Elytis, whose writings were seen as a mirror to the revolutionary music of Theodorakis. The autobiographical elements are constantly coloured by allusions to the history of Greece, and his poems express a contemporary consciousness fully resonant with those echoes of the past that have shaped the modern Greek experience. 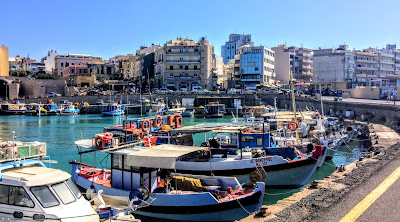 Odysseus Elytis was born in Iraklion in 1911 (Photograph: Patrick Comerford)

Odysseus Elytis (1911-1996) is one of the poets who revived Greek poetry in the last century, several of his poems have been set to music and his collections have been translated into dozens of languages.

Odysseus Elytis (Οδυσσέας Ελύτης) was his pen name, but he was born Odysseus Alepoudellis (Οδυσσέας Αλεπουδέλλης) in Iraklion, the capital of Crete, on 2 November 1911. The Alepoudelis family was an old industrial family from Lesbos.

When he was three, the family moved to Athens, where he went to school and later studied law at the University of Athens.

He published his first poem in 1935 in the journal New Letters (Νέα Γράμματα) at the prompting of friends such as George Seferis. His entry with a distinctively earthy and original form assisted to inaugurate a new era in Greek poetry and its subsequent reform after World War II.

He was an army lieutenant during World War II, and fought on the Albanian frontline, resisting the Italian invasion.

After World War II, he was twice Programme Director of ERT, the Greek National Radio Foundation (1945-1946 and 1953-1954). In between, he moved to Paris in 1948, where he studied philosophy at the Sorbonne. He moved in literary and artistic circles that included Matisse, Picasso, Chagall and Sartre, but was private and solitary in pursuing poetic truth. He worked for the BBC in London in 1950-1951.

His great epic poem, Το Άξιον Εστί (To Axion Esti, It is Worthy) was published 60 years ago in 1959, after a period of more than 10 years of poetic silence. It became one of the most widely read volumes of poetry published in Greece since World War II, and it remains a classic to this day.

The Axion Esti won the National Book Award for Poetry in 1960. Widely regarded as his chef d’oeuvre, it is a poetic cycle of alternating prose and verse patterned after the ancient Byzantine liturgy.

As in his other writings, Elytis depicts Greek reality through an intensely personal tone. It is a hymn to creation inspired by the Greek Orthodox liturgy and the 17th century epic poetry of Crete, including the Erotokritos (Ἐρωτόκριτος) by Vikentios Kornaros. It is a composition of song and praise that is all the more powerful for exploring the darkest of shadows at times. The speaker explores the essence of his being as well as the identity of his country and people.

At the invitation of the State Department, he travelled throughout the US in 1961, and similar invitations brought him to the Soviet Union (1963) and Bulgaria (1965). He was awarded the First State Poetry Prize in Greece in 1960, and was decorated with the Order of the Phoenix in 1965.

Meanwhile, the composer Mikis Theodorakis set his Axion Esti to music in 1964, and it became immensely popular throughout Greece. This setting by Theodorakis later contributed to Elytis receiving the Nobel Prize.

During the colonels’ regime in Greece, Elytis lived in exile from 1969 to 1972 in Paris. He returned to Greece, and in 1975 was awarded an honorary PhD by Thessaloniki University and received the honorary citizenship of Mytilene.

He received the Nobel Prize for Literature in 1979. He died of a heart attack in Athens on 18 March 1996, at the age of 84, and was buried at the First National Cemetery in Athens. 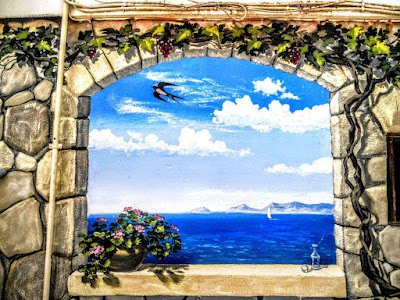 ‘On the open sea they lay in wait for me’ … street art in Iraklion (Photograph: Patrick Comerford)

The setting of Το Άξιον Εστί (To Axion Esti) to music by Theodorakis as an oratorio, with its sheer beauty and musicality, provided anthems that were sung throughout Greece by in the resistance to injustice.

It is surprising, then, that it was not included by Constantine Trypanis in The Penguin Book of Greek Verse in 1971.

Edmund Keeley, who translated the epic into English, suggested the Axion Esti can ‘be taken best as a kind of spiritual autobiography that attempts to dramatise the national and philosophical extensions of the poet’s personal sensibility. Elytis’s strategy in this work … is to present an image of the contemporary Greek consciousness through the developing of a persona that is at once the poet himself and the voice of his country.’

This morning’s song, Της αγάπης αίματα canto (‘The Blood of Love’) is Canto 10 in the Axion Esti. It is part of the repertoire of one of Greece’s most loved singers, Maria Farantouri, and she included it in last year’s farewell tribute concert to Theodorakis.

This song is often interpreted as a Christian hymn, a tribute to the Virgin Mary as the Mother of Christ. But it is also sung as a love song, a song of distant or unrequited love, and it is also interpreted as the political exile’s longing to return to Greece as the mother.

Theodorakis only included three stanzas of this canto in his setting, which is considered by many critics to be the most significant work of modern Greek music.

The English translation, ‘The Blood of Love,’ by Edmund Keeley and Giorgos Savidis, includes five stanzas:

The Blood of Love

The Blood of Love has robed me in purple
And joys never seen before have covered me in shade.
I’ve become corroded in the south wind of humankind
Mother far away, my Everlasting Rose.

On the open sea they lay in wait for me,
With triple-masted men-of-war they bombarded me,
My sin that I too had a love of my own
Mother far away, my Everlasting Rose.

Once in July her large eyes
Half-opened, deep down my entrails, to light up
The virgin life for a single moment
Mother far away, my Everlasting Rose.

And since that day the wrath of ages
Has turned on me, shouting out the curse:
‘He who saw you, let him live in blood and stone’
Mother far away, my Everlasting Rose.

Once again I took the shape of my native country,
I grew and flowered among the stones.
And the blood of killers I redeem with light
Mother far away, my Everlasting Rose.

An easier translation of the three stanza song that retains its popularity reads:

Bloods of love dyed in red
and joys unseen did shade me
I got oxidated in the dampness of people
Distant mother, my rose unfading.

In the open sea they awaited me
with three-sail bombard ship
and opened fire my sin to have a love
Distant mother, my rose unfading.

Somewhere in July, her big eyes half opened,
inside my bowels the pure life,
for a moment to enlighten
Distant mother, my rose unfading.

Thank you for all of the detailed information about this wonderful song. Just what I've been searching for!
Kind regards, Veroni

Thank you for the detailed and well referenced analysis of Αξιον Εστι and this unforgettable song...

This is appropriate at this sad time

Unforgettable poem and the music of Theodorakis!!!