The pebble shoreline below Old Templenoe Church, Co Kerry, has panoramic views of the Bay of Kenmare (Photograph: Patrick Comerford, 2020; click on images for full-screen view)

On the road from Kenmare to Sneem earlier this week, two of us stopped briefly at Templenoe (An Teampall Nua, ‘the new church’) to see the small, pebbly beaches, the piers and the old church ruins and the former Church of Ireland parish church.

Templenoe is on the coast of Kenmare Bay, about 6 or 7 km west of Kenmare, and we found it by instinct, not having any plans to stop at this point on the Ring of Kerry.

Templenoe is known to sports fans for the Spillane brothers, Pat, Mick and Tom, who played football for Kerry, or perhaps for the Ring of Kerry golf club. But this is also a place of scenic charm and tranquillity, above the north shore of Kenmare Bay and below the Mangerton Mountains and MacGillycuddy’s Reeks. 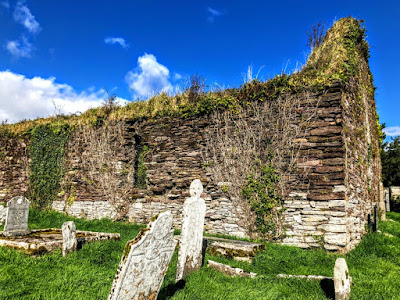 The first church at Templenoe, between Kenmare and Sneem, Co Kerry, dates from 1092 (Photograph: Patrick Comerford, 2020)

The name Templenoe (An Teampall Nua) means ‘The New Church,’ and this in turn refers to a church that was new when it was built in the 11th century and is now a ruin in the grounds of Old Templenoe Cemetery.

The mediaeval church dates back to 1092, and other sites of ecclesiastical interest in the area include a holy well in Dromore, various mass rocks, and the former Church of Ireland parish church.

Nearby are the ruins of the ancient castle of Dunkerron, once the chief seat of the O Sullivan Mór.

The church was also known as Killinane church of Glebe, Glandiche or Templum Novum. 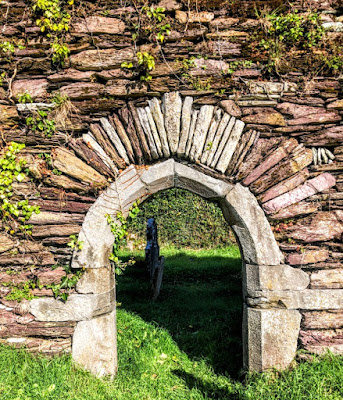 All that survives of the early mediaeval church in Templenoe is the arched door on the south side (Photograph: Patrick Comerford, 2020)

The lists of rectors and vicars of Templenoe, the priests who served this church, date from the mid-14th century.

All that survives of the early mediaeval church today is the arched door on the south side. The ruined church that stands today replaced the earlier church and was built ca 1450 by Cor, grandson of Macarius, of the sliocht Mac Crah, a branch of the O Sullivan Mór family who also built and lived at nearby Cappanacuss Castle.

Some time later, Donal O’Sega or O’Shea was removed as Vicar of Templenoe in 1464, when he was reported to have committed simony by giving goods to a parishioner to induce the patrons to appoint him to the parish. 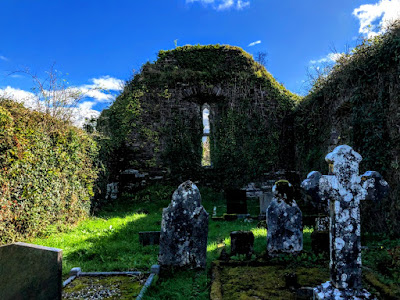 Two priests who are buried here were said to be holy men. Later, some local people removed their bones and took them home as relics and to use for cures. It is now thought their grave was then sealed at the south-east corner of the church ruins.

However, there is a gap in the names of priests who served the parish from the late 15th century, through the Reformation period, until the beginning of the 17th century, when Edward Graine or Granie was appointed rector in 1629.

Later rectors were also rectors of the neighbouring parishes of Kenmare and/or Kilcrohane (Sneem), although the parish nominally maintained a separate identity until the second half of the 19th century.

The Revd Thomas Orpen, who was rector in 1727-1767, was the ancestor of a family well-known for bishops, clergy and artists.

The Revd Fitzgerald Tisdall, who was rector briefly in 1808-1809, had previously been a magistrate in Co Cork and had commanded a yeomanry corps against the French invasion at Crookhaven in 1798. He was murdered at Priest’s Leap, near Kenmare, on Easter Day, 26 March 1809. 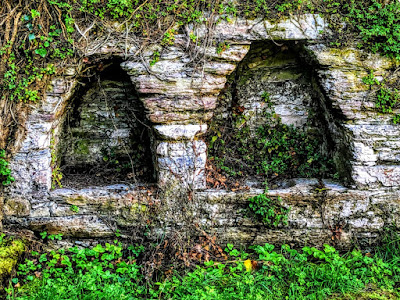 The piscina inside the ruins of Old Templenoe Church (Photograph: Patrick Comerford, 2020)

The oldest marked gravestone in the churchyard today survives from 1782.

It is said that 40 burials took place in Templenoe churchyard on one day alone at the height of the Great Famine in the year 1847.

The church ruins stand above a pebble shoreline with panoramic views of the Bay of Kenmare.

The Revd Charles Peter Thomas, who was the curate in Kenmare and Templenoe, died of Famine fever in Kenmare on 26 June 1847. 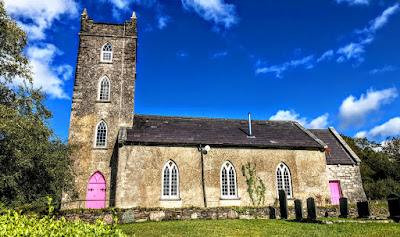 A new Church of Ireland parish church was built in Templenoe in 1816 (Photograph: Patrick Comerford, 2020)

Meanwhile, a new Church of Ireland parish church was built for the parish in 1816, about 1 km west of the ancient church. It cost of £700 to build, with £100 donated by John Mahony of Dromore Castle, who also gave the site, and the remaining £600 as a gift from the Board of First Fruits.

The Revd Denis Mahony, who was the curate in the mid-1820s, was a son of John Mahony of Dromore Castle, and a grandson of Edward Day of Beaufort, Archdeacon of Ardfert (1782-1808).

Samuel Lewis noted in 1837 that the church ‘is fitted up with teak wood from the wreck of a vessel.’

Canon Arthur Vincent Watson, who was the Rector of Kilcrohane and Templenoe in 1850-1872, was regarded as ‘very eccentric’ and prone to ‘fits of madness.’ He was forced to retire in 1872, but he continued to live in Kenmare. During one ‘mad fit,’ he shot his wife, and ended his days in a criminal lunatic asylum. His life is recalled by Robert Graves in To Return to All That.

Templenoe parish was united to Kenmare and Kilcrohane (Sneem) in 1874. This parish church was renovated in 1880 with internal alterations designed by the architect Joseph Welland, the installation of new pews, and the addition of a chancel.
The church closed in 1987. 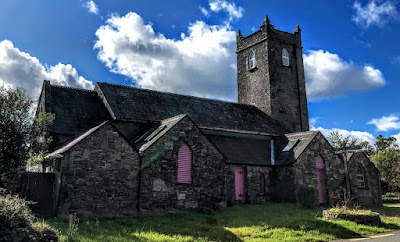 Templenoe parish was united to Kenmare and Kilcrohane (Sneem) in 1874 (Photograph: Patrick Comerford, 2020)

This former Church of Ireland parish church was renovated in 1993 as ‘The Vestry’ restaurant, and is now available to rent through Airbnb, with big open plan spaces, high-end furniture, double wood-burning stove and a 70 ft living room.

The graveyard beside the church was in use until 1985 and has a number of cut-stone markers that are unfortunately overgrown and impossible to read.

A narrow road below the church and the churchyard leads down to another small, pebble cove with yet more scenic views of the Bay of Kenmare. 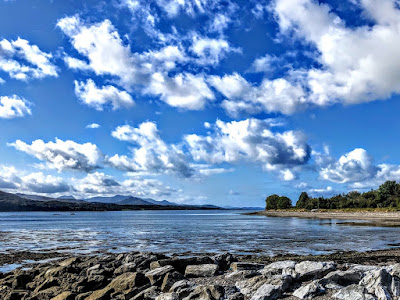 The pebble cove beneath Templenoe Church, with scenic views of the Bay of Kenmare (Photograph: Patrick Comerford, 2020)