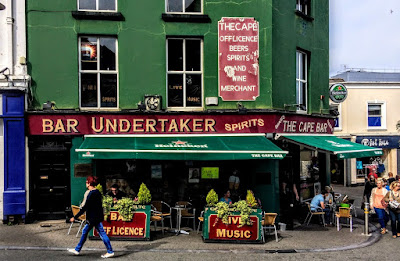 The Cape Bar, Con Macken’s or the ‘Cape of Good Hope’ in The Bullring, Wexford … the venue of a tragic murder in 1910 (Photograph: Patrick Comerford)

My discussion earlier this week (27 July 2020) of how I have identified a family photograph of James Comerford (1817-1902) of Wexford and Dublin and his wife Anne née Doyle (1834-1899) brought my memory back to the sad story of a photographer’s studio in Wexford over 100 years ago that is said to have inspired James Joyce’s depiction of Leopold Bloom and his family in Ulysses.

Of course, some of James Comerford’s immediate family lived at 50 Upper Clanbrassil Street in Dublin, two doors up from No 52, where it was later said Leopold Bloom was born.

But I first came across the tragic story of Simon Bloom, who was jilted and vainly planned an apparent double suicide in his photographer’s shop in Wexford in Louis Hyman’s The Jews of Ireland. The story has been retold in part more recently on the Wexford Hub website.

Mary Anne Wildes, an 18-year-old Wexford woman, was found on 7 May 1910 with her throat cut at an apartment in The Bullring, Wexford. The apartment, above a bar called The Cape of Good Hope, was being rented at the time by 29-year-old Simon Bloom.

Bloom, whose family lived in the Clanbrassil Street or ‘Little Jerusalem’ area of Dublin and Armstrong Street in Harold’s Cross, was a self-described artist who was known throughout Wexford for selling picture frames and photo enlargements.

Mary Anne Wildes, who lived on Roche’s Terrace with her widowed mother, had worked for Bloom in the past; watching after his premises when he was away in Dublin.

Witnesses said Simon Bloom had become besotted with Mary Anne Wildes. However, in the days leading up to her murder, she had become engaged to another man, Archie Wade. She had also refused Bloom’s request for her to return to work with him. Ms Wildes’ friend, Brigid Mary Power, would later tell the court that Bloom had ‘pestered’ the victim. 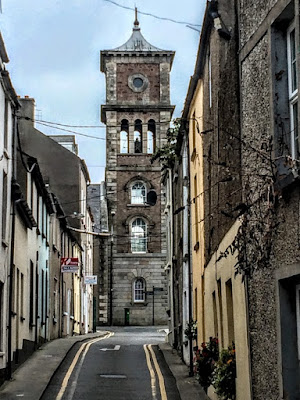 On Saturday 7 May 1910, John Doyle and Thomas Lewis of Mary Street heard someone groaning inside the hallway that led to Bloom’s residence. When they opened the letterbox and asked who was there, a voice replied ‘Mary Anne.’

Bloom soon arrived back at his flat. While talking to the two men, he tried to deflect any blame away from himself, claiming he had left a man and a woman inside the apartment. When he opened the door, however, Bloom pushed past the injured Mary Anne Wildes, dashed towards the stairs and tried to seal himself inside his apartment.

The extent of Mary Anne’s injuries now became clear to the two men, with blood gushing from a wound in her neck, staining her dress and the white rose that she was wearing.

Thomas Lewis picked Mary Anne up in his arms and called out for a doctor. She was put into a handcart and pushed to the infirmary on Hill Street. As she was being pushed along, bystanders watched on in shock as others tried to stop the blood by placing handkerchiefs over the wound on her neck.

When Mary Anne Wildes arrived at the infirmary on Hill Street, she was still conscious and named Simon Bloom as her attacker. She also said Bloom had asked her to marry him. Although she never told anyone what her answer was, it was presumed she had spurned him and that Bloom flew into a jealous rage.

When news of the attack spread through the town, an angry mob began to descend on The Bullring. They demanded the door into Bloom’s apartment should be broken in. Police on the scene managed to contain the crowd in the Bullring until the owner of the building found a key.

Newspaper reports at the time said that when police entered Bloom’s apartment, they found him sitting in a chair with a wound to his throat and a letter in his hand – an unsuccessful attempt at suicide. He told the police that Mary Anne and he had agreed to die together, and he kept repeating and spelling the word ‘love.’ In his hands he held a rambling, bloodstained and unsigned letter, addressed ‘To those who would judge the scales of humanity and justice.’

A blood-stained razor was taken from Bloom and he too was taken to the infirmary on Hill Street.

A deposition was taken from Mary Anne Wildes at the infirmary the following day. In her statement, she said Bloom had caused the three-inch-long wound to her neck after he had attempted to choke her. Bloom, who was present, refused to cross-examine her. Mary Anne Wildes died at 10 p.m. that evening as a result of her injuries.

Simon Bloom was committed for trial on a charge of wilful murder in Wexford on 6 July 1910. He appeared with his neck bandaged and looked very pale, and the court heard he had been in the infirmary since cutting his throat.

Bridget Power, a friend of the dead girl, told the trial that Mary Anne was engaged to a young man from Manchester named Archie Wade. When Archie left by the Liverpool steamer earlier that fateful Saturday, Bridget and Mary Anne had seen him off. Bloom watched them do so and afterwards went to them and said that he wanted to speak to Mary Anne alone.

Mary Anne’s mother, Henrietta Wildes, told the court she last saw her daughter alive at 8.15 that eventful night. Asked if she knew Bloom, Mrs Wildes turned from him and said, ‘I don’t want to know him. He murdered my child.’

She told how her daughter had been employed for a week to mind Bloom’s studio while he was in Dublin. Afterwards, he had asked her several times to go back to return his studio. But Mrs Wildes said she would not allow it as her daughter was engaged to Archie Wade.

Dr David Hadden of the Hill Street Infirmary diagnosed Bloom as a monomaniac. Bloom was found guilty and spent a few years in the Dundrum Lunatic Asylum for the Criminally Insane in Dublin.

What happened to Simon Bloom after his conviction?

Mark Gevisser takes up the story in his semi-autobiographical Lost and Found in Jerusalem (Granta Books, 2014). After his release, Bloom moved to Chicago, where he changed his name and became ‘a genial Jewish patriarch’ in the suburbs. ‘His descendants were horrified when an overly-assiduous Irish-Jewish genealogist contacted them to spill the beans.’

However, there are problems with literary efforts to identify any incident in Leopold Bloom’s life or family with this Wexford tragedy. Joyce carried out most of his research for Ulysses while he was on a return visit to Ireland in 1909 – but this incident in Wexford too place a year later.

Louis Hyman also wonders whether Leopold Bloom is also, in part, modelled on Simon Bloom’s brother, Benny Bloom, listed in the 1901 census as a traveller and still selling ‘holy pictures’ in Dublin in the 1960s. However, Ó Gráda points out that Benny joined the army at the age of 20 in 1901 and did not return to Dublin until 1916. So, he too seems an unlikely candidate, and Ó Gráda suggests that ‘all these searches for Leopold Bloomʼs Dublin cousins turned out to be wild goose chases.’

On other hand, Mark Gevisser is half-joking when he insists the story shows he is related to Leopold Bloom. Gevisser’s grandmother, Gertie Blum, was born in 1901 at 5 Lombard Street West in Dublin’s ‘Little Jerusalem.’ This was the home of her grandfather, Zalman Blum. ‘The address is significant: we learn in Ulysses that Leopold and his wife, Molly, had begun their married lives … at 57 Lombard Street West, a little closer to Lower Clanbrassil Street.’

‘I have verified that that the brothers Simon and Benny were Zalman Bloom’s cousins. And so, my Granny Gertie was correct: we are related to Leopold Bloom.’

The synagogue at 11 Lombard Street West in the ‘Little Jerusalem’ area of Dublin (Photograph: Patrick Comerford, 2019)