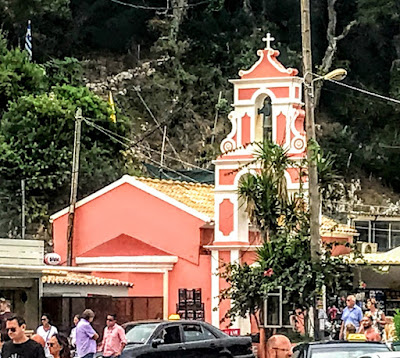 The Church of Saint Spyridon is squeezed in between the coffee bars and a souvenir shop (Photograph: Patrick Comerford)

Later today, as President of the Irish Campaign for Nuclear Disarmament (Irish CND), I am speaking at the Hiroshima Day commemorations in Merrion Square, Dublin. But, before the day gets busy, I am taking a little time this morning for prayer, reflection and reading.

This week’s theme is seven churches on the Greek island of Corfu, and my photographs this morning (6 August 2021) are of the Church of Saint Spyridon in Palaiokastritsa. 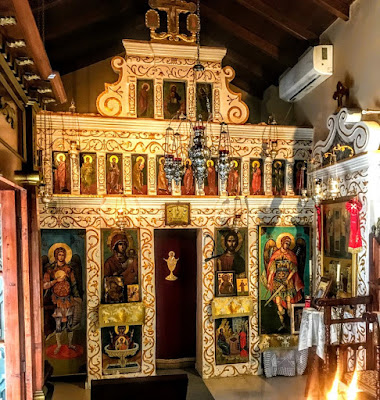 Inside the Church of Saint Spyridon in Palaiokastritsa (Photograph: Patrick Comerford)

Paleokastritsa is a popular family resort on the north-west coast of Corfu, about 25 km from Corfu Town. There are three main coves – Agia Triada, Platakia and Alipa – and many other tiny, secluded beaches around it, separated by the round-shaped capes.

My visit to Paleokastritsa was short, however, and I never got to visit Angelokastro or the monasteries of Palaiokastritsa and the Theotokos. But close to the main beach, jutting awkwardly between the coffee bars and a souvenir shop opposite the chaotic car park is the tiny, pink Church of Saint Spyridon, with a bell tower built in 2002.

Saint Spyridon became the patron saint of Corfu, and Spyridon, or Spyros, is a popular name throughout the island. His feast day is on 12 December.

The Church Saint Spyridon in Palaiokastritsa is so small it is hard to imagine it holding a congregation of more than 10 people. But the door is open, candles are lit, and tourists are made to feel welcome to pop in and look at the icons or find time to pray. 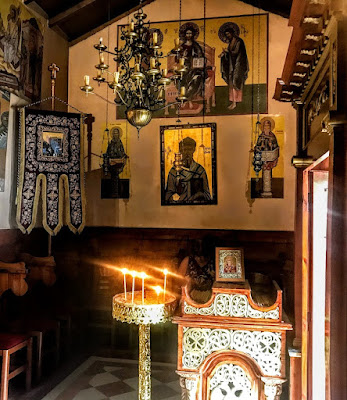 The Church of Saint Spyridon, Palaiokastritsa, can hold a congregation of no more than about 10 people (Photograph: Patrick Comerford) 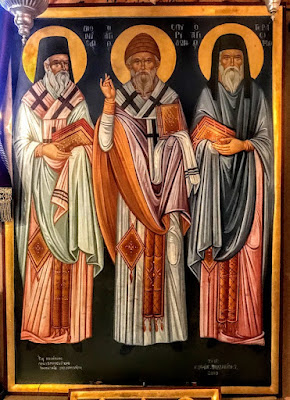 Saint Spyridon (centre) in a fresco in the Church of Saint Spyridon, Palaiokastritsa (Photograph: Patrick Comerford)

The Prayer in the USPG Prayer Diary today (6 August 2021) invites us to pray:

We thank God for the gift of ecumenical collaboration in Hiroshima and around the world. May the church of Christ always seek to walk closer together, learning from one another. 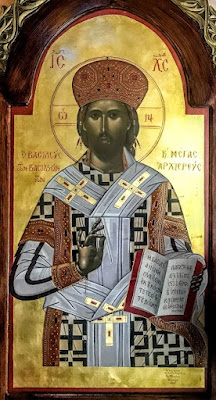 An icon of Christ as the King of Kings and Great High Priest in the Church of Saint Spyridon, Palaiokastritsa (Photograph: Patrick Comerford) 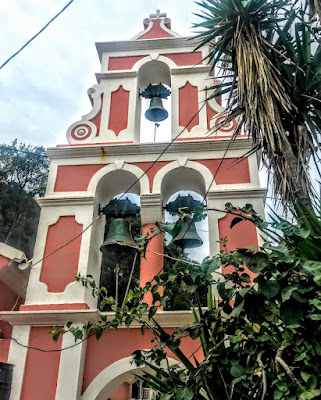 The bells of the Church of Saint Spyridon, Palaiokastritsa (Photograph: Patrick Comerford)