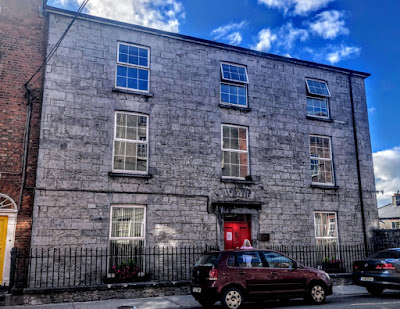 Bindon House, built in 1823, marked the beginning of the development of Bindon Street in Ennis, Co Clare (Photograph: Patrick Comerford, 2021)

In the early 19th century, Ennis had many crooked, narrow streets flanked by older buildings from the previous centuries. Bindon Street was one of the first formal streets developed in the town. The origins of this street date from 1823, when William Greene, a local lawyer, built Bindon House, a sizeable house of roughcut limestone, on land owned by Bindon Blood (1775-1855) just off Mill Road.

Although I have grown to know Ennis in recent years, but on Bindon Street I was only familiar with Saint Columba’s Church, the Church of Ireland parish church built in the 1860s.

A visit to Ennis last weekend to meet friends as part of this summer’s extended ‘road trip’ allowed me to explore Bindon Street, with its elegant Georgian buildings, in the afternoon summer sunshine.

The fortunes of the Bindon family, and later the Bindon Blood family, can be traced back to Francis Bindon (1690-1765) was a popular architect and painter in 18th century Ireland. Bindon was commissioned to design buildings and paint portraits for some of Ireland’s most prominent figures. Perhaps his most famous portrait is of Turlough Carolan, the blind harpist. He also painted portraits of Archbishop Hugh Boulter, Thomas Sheridan, Archbishop Charles Cobbe, Dean Patrick Delaney, and several of Dean Jonathan Swift.

Bindon was born in Clooney House, Co Clare, into a land-owning family, Bindon. His father, David Bindon, was MP for Ennis; his mother, Dorothy Burton of Buncraggy House, Clarecastle, came from a family that controlled the Ennis Parliamentary Borough for much of the 18th century.

One brother Henry Bindon was a barrister, another brother Thomas Bindon was Dean of Limerick, and two other brothers, David and Samuel Bindon, were MPs for Ennis in 1715-1731. Bindon died on 2 June 1765 leaving his house in Abbey Street, Dublin, and much of his possessions to his lifelong friend Francis Ryan.

The Bindon interests in Ennis passed to the Bindon Blood family with the marriage of Elizabeth Bindon and William Blood. William Greene, a local lawyer, built Bindon House, a sizeable house of rough-cut limestone, on land owned by Bindon Blood (1775-1855), in 1823.

Bindon House, now No 12 Bindon Street, is a three-bay, three-storey house over basement. It has a symmetrical frontage with a restrained door-case as its centrepiece. The classically proportioned windows are simply dressed with tooled cut-limestone block-and-start surrounds.

An enclosed yard on the north side, reached from the basement area, had stables, coach houses and out-offices.

Bindon House also had a large cellar, extending from basement level, and running under what would become Bindon Street. This cellar was used as a large coal store and, indeed, all the houses on Bindon Street have vaulted coal stores, and in 1941 it was suggested that they could be requisitioned as air-raid shelters in the event of a German attack. 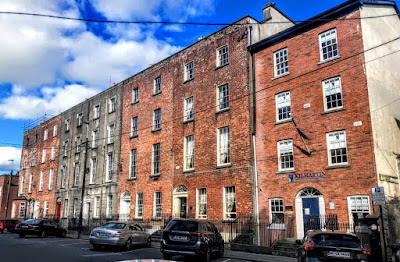 Bindon Street was laid out after Bindon House was built, and more houses were built on the street over the following decades. Charles Harvey Bagot (1778-1880), the land agent for Bindon Blood, could not find a suitable house for his family and decided to build his own. He persuaded the county treasurer and a local magistrate to build four identical houses, on the opposite side from Greene’s house.

Nos 3-6 Bindon Street were built in Georgian style. They are two bays wide and have frontages of four storeys over open basements. They are built in red brick, perhaps made locally, and have classical door-cases with fanlights.

No 3 Bindon Street has a plaque giving 1832 as the date of its construction. No 5 and 6 have their original red brick Flemish bond finish.

Bindon Blood, who had been living in Edinburgh, built another house beside No 3. This was larger than the neighbouring houses, and the under-street tunnels extended across to what had been Greene’s yard but was now a garden. Blood died in 1855 and his widow Maria converted the house into two separate dwellings, and possibly extended what later became No 1 Bindon Street.

The bay window and the pedimented limestone doorcase at No 1 are later additions dating from 1850.

The west side of Bindon Street was developed in 1836 with finance from a tontine, or subscribers’ annuity. Five identical houses were proposed and 20 shares, worth £100 each, were issued. The five houses were identical in appearance and, although smaller in scale than their opposing neighbours, share qualities in common with the earlier ones.

The five houses at No 7-11 Bindon Street are two bays wide and three storeys high over open basements. They are finished with red brick laid in a Flemish bond pattern, they have fan-lit Classical door-cases at street level and conceal their roofs behind parapets. No 7 served briefly as the County Library in 1933-1943.

Two further developments completed Bindon Street in the 1860s. The Provincial Bank, later Allied Irish Bank and now Munster Insurance, was built in 1860-1864, and Saint Columba’s Church was built in 1869-1871 on a site at the southern end of the street donated by the Blood family. 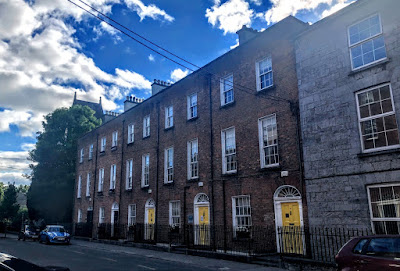