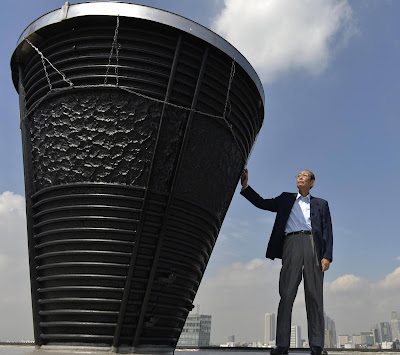 Yoshinori Sakai, who ran the final leg of the torch relay for the 1964 Tokyo Olympics, at the Olympic torch in Tokyo shortly before he died

I think we are all proud of the medals our Olympic athletes have brought home from Tokyo. Personally, I am particularly proud of our rowers and scullers.

I am old enough now to also recall the first Olympics in Tokyo, back in 1964.

But how many of us remember the opening ceremony in Tokyo on 10 October 1964 … 57 years ago, but just 19 years after the bombing of Hiroshima?

Yoshinori Sakai (1945-2014) was the Olympic flame torchbearer who lit the cauldron at the Tokyo Olympics in 1964. He was born on the day of the atomic bombing of Hiroshima, two hours after the bombing. The Hiroshima bomb exploded so close to his hometown of Miyoshi, 60 km away, that his father saw the flash.

At the age of 19, Yoshinori Sakai was chosen to light the flame to symbolise Japan’s post-war reconstruction and commitment to peace. At the time, sports commentators labelled him ‘the Hiroshima Boy.’

While the nations compete at the Tokyo games this summer, there are four clear indicators that the world is not safe while we sit and watch.

1, It is now estimated that the Covid-19 pandemic will kill well over two million people around the globe. Nuclear weapons have failed to protect the world – have failed to protect us – against this mass killer. We may yet find we are facing wave after wave of pandemics, but the world’s nuclear powers have learned nothing and continue to spend money needed for health care and research on weapons that are useless against this global threat to our security and our survival.

Indeed, the mishandling of this grave global health crisis is a ‘wake-up call’ that governments, institutions, and a misled public remain unprepared to handle the even greater threats posed by nuclear war and climate change.

2, The failure of the world powers to deal with climate change and global warming show the folly of using the world’s scarce resources for the pleasure of the rich of this generation. Fires continue to rage across Greece and Turkey as I speak, and no amount of spending on nuclear weapons can ever protect us against climate change and global warming, against the folly of world leaders who have brought this crisis to a head in our generation.

3, Cyber security has shown how vulnerable, how weak, every country in the world is today. It was Ireland’s hospitals and health service that were targeted in recent weeks. But it was also oil supplies on the east coast of the US, trains in Britain, Iran and Australia, cabinet offices in Poland and Japan, Dutch police, the supply chains of major food suppliers in Australia, Brazil, Canada and the US … all in recent weeks.

Nuclear weapons are no protection against people who are waging a new, low-level, cold war that is warning us that everything is vulnerable, everything can collapse, everything can grind to halt. And if the para-state hackers get into the command and control systems of nuclear arsenals, all guided missiles become mass killers with the capacity to destroy all life as we know it.

4, Nuclear weapons cannot protect the victims of human rights abuses, the migrants caught in the waters of the Mediterranean or between Calais and Dover, or the people increasingly denied access to clean water, food or affordable medical care.

Nuclear weapons cannot open the eyes of a blinkered Priti Patel or roll back the folly of Brexit in Boris Johnson’s Britain, where £205 billion is being spent on replacing Trident, Britain’s nuclear weapons system – money that public morality says must be spent instead on meeting genuine security needs: providing a properly-funded NHS and a sustainable energy sector.

This year, the Doomsday Clock of the Bulletin of the Atomic Scientists remains as close to midnight as it has ever been – just 100 seconds to midnight.

Dr Rachel Bronson of the Bulletin of the Atomic Scientists says the ‘lethal and fear-inspiring’ Covid-19 pandemic is as a ‘wake-up call,’ a vivid illustration that national governments and international organisations are ‘unprepared to manage the truly civilisation-ending threats of nuclear weapons and climate change.’

But Yoshinori Sakai was like so many hibakusha. He too succumbed as a victim of the bomb, and he died of cerebral bleeding in Tokyo at the age 69, 50 years after the first Tokyo Olympics, on 10 September 2014.

Before this year’s Tokyo Olympics began on 23 July, the Olympic torch relay passed through Hiroshima on Monday 17 May. There were few participants because of the pandemic. But one of the torchbearers was Yoshinori Sakai’s younger brother, Takayuki Sakai. He was part of the group who brought the Olympic flame to the city’s Peace Memorial Park, near the epicentre of the atomic bombing.

There should be no more Yoshinori Sakais, no more hibakusha.