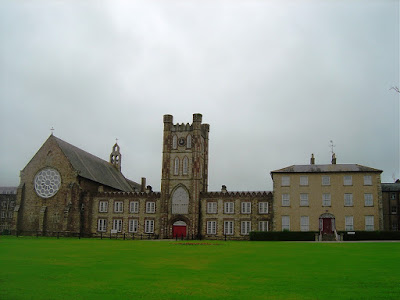 My photographs this morning (23 March 2021) are from the chapel of Saint Peter’s College, Wexford. The four-storey Gothic Tower at the centre of the main college buildings is said to have been designed by Richard Pierce, but the chapel is Pugin’s first great work in Ireland.

Phoebe Stanton has identified the chapel at Saint Peter’s as a larger version of Saint Mary’s, his church in Uttoxeter. The chancel is the same height as the nave. The altar still has Pugin’s triptych, which resembles the triptych he designed for Uttoxeter and Derby. In the rose window above, the medallions celebrate the Talbot families, Pugin’s patrons in Staffordshire and in Wexford.

The screen, rood, side altars and simple pews designed by Pugin are long gone, the floor level has been changed, and the seating has been rearranged in collegiate style. But the impact is still dramatic, and one of the most beautiful Pugin churches. 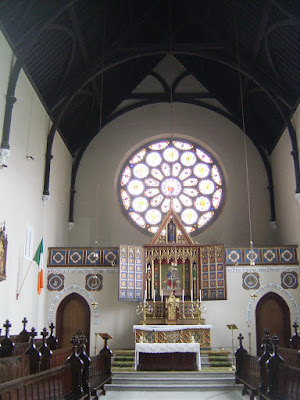 21 Jesus said to them, ‘I am going away, and you will search for me, but you will die in your sin. Where I am going, you cannot come.’ 22 Then the Jews said, ‘Is he going to kill himself? Is that what he means by saying, “Where I am going, you cannot come”?’ 23 He said to them, ‘You are from below, I am from above; you are of this world, I am not of this world. 24 I told you that you would die in your sins, for you will die in your sins unless you believe that I am he.’ 25They said to him, ‘Who are you?’ Jesus said to them, ‘Why do I speak to you at all? 26 I have much to say about you and much to condemn; but the one who sent me is true, and I declare to the world what I have heard from him.’ 27 They did not understand that he was speaking to them about the Father. 28 So Jesus said, ‘When you have lifted up the Son of Man, then you will realize that I am he, and that I do nothing on my own, but I speak these things as the Father instructed me. 29 And the one who sent me is with me; he has not left me alone, for I always do what is pleasing to him.’ 30 As he was saying these things, many believed in him.

Let us pray for all who are discriminated against because of the colour of their skin and for an end to racial discrimination. 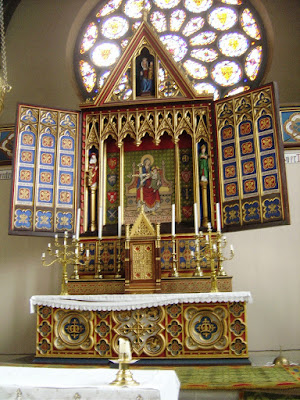