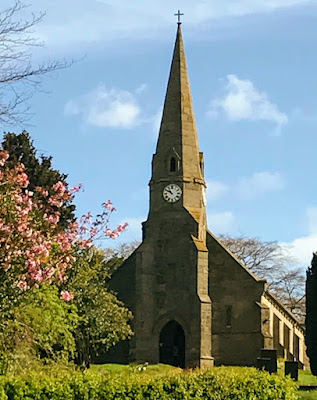 Saint John’s Church, Wall, stands on the site of a Roman temple dedicated to the goddess Minerva (Photograph: Patrick Comerford) 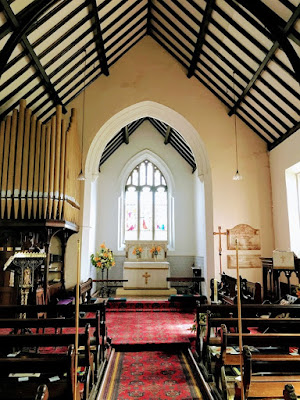 The parish church in Wall was built in 1837 and was consecrated as the Parish Church of Saint John in 1843. The church is set at the top of a rise and is said to stand on the site of a Roman temple dedicated to the goddess Minerva, and later used for Mithraic worship. But even before the Romans, this may have been the site of Celtic temple dedicated to the god Cernunnos, who was the equivalent of the Roman Pan.

Charles Eamer Kempe (1837-1907), the Victorian stained glass designer and manufacturer, and his studios produced over 4,000 windows along with designs for altars and altar frontals, furniture and furnishings, lichgates and memorials that helped to define a later 19th century Anglican style. Many of Kempe’s works can be seen in Lichfield Cathedral, Christ Church, Lichfield, and the Chapel of Saint John’s Hospital, Lichfield. He also designed the reredos in the Lady Chapel, Lichfield.

Kempe’s window in Saint John’s Church, Wall, shows the Risen Christ meeting Mary Magdalene in the Garden on the morning of the Resurrection, and addressing her: ‘Mary.’ Peter and John who arrived at the empty tomb that Easter morning can be seen as two small figures in the background.

3, Saint John the Divine and Saint Luke: This window may also be the work of CE Kempe. The left light shows Saint John the Evangelist holding a parchment with the opening verse of his Gospel: ‘In the beginning was the Word, and the word was with God, and the word was God.’ The window’s dedication reads: ‘To the glory of God and in loving memory of Anne Bradburne AD 1899.’

4, Saint Peter and Saint Paul: Saint Peter is on the left holding the keys of the kingdom, while his stole is inscribed with the Greek word Άγιος (‘Holy,’ ‘Saint’ or ‘Saintly’). Saint Paul, on the right, is holding a sword, the symbol of his martyrdom. The dedication reads: ‘To the Glory of God & in loving memory of the Rev W Williams, formerly vicar of this parish.’ The Revd William Williams was the Vicar of Wall for 12 years from 1864 to 1876.

The East Window above the altar shows Christ as the Good Shepherd. There are three sets of initials in the top of the window: Alpha (Α) and Omega (Ω), the first and last letters of the Greek alphabet, and a title of Christ in the Book of Revelation; IHS, representing the name Jesus, spelt ΙΗΣΟΥΣ in Greek capitals (Ιησουσ); and the Chi Rho symbol (XP), representing the Greek word ΧΡΙΣΤΟΣ (Χριστός, Christ). On either side of Christ are the Virgin Mary (left) and Saint John the Divine (right).

1, Abel and Enoch: The first window on the north side shows Abel and Enoch. Abel on the left is holding a lamb, while Enoch is one of the early prophets. The Letter to the Hebrews praises the faith of Abel and Enoch (see Hebrew 11: 4-6). The dedication reads: ‘To the glory of God & in memory of Ann Danks of Fosseway in this parish, died Sep 3 1877.’

2, Noah and Abraham: Noah (left) is holding the ark in his arms, while Abraham is holding a rather unwieldy knife representing his intended sacrifice of Isaac. This window is without any dedication or inscription.

3, Moses and Elias: This window, with Moses on the left and Elijah (or Elias) on the right has the dedication: ‘To the glory of God and in loving memory of Louisa Ann Mott & Henrietta Ley.’ Moses and Elijah represent the Law and the Prophets, and at the Transfiguration they are seen on either side of Christ.

The Church of Saint John the Baptist is at Green Lane, Wall, Staffordshire, WS14 0AS. It is uited with the Parish of Saint Michael, Greenhill. The Sunday services are normally at 10 a.m. each week. The benefice is awaiting a new rector, but in the past Sunday services have included Holy Communion on the first, second and fourth Sundays, Morning Worship on the third Sunday, and ‘Wall praise’ on the fifth Sunday, described as ‘a serviced for all the family.’ 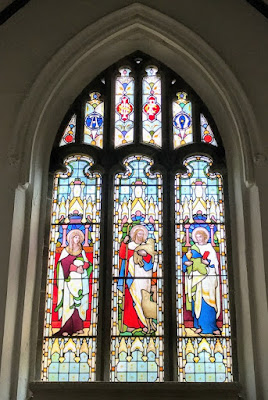 1 On one occasion when Jesus was going to the house of a leader of the Pharisees to eat a meal on the sabbath, they were watching him closely. 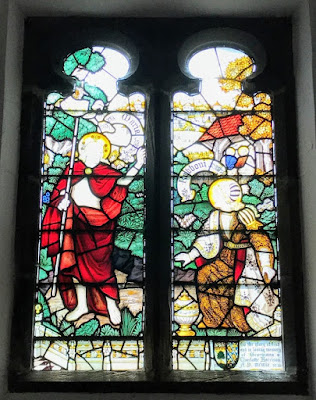 The Prayer in the USPG Prayer Diary today (30 October 2021) invites us to pray:

We pray for those who build bridges between those of different faiths and none, and for those with whom we share a common faith in Jesus as Lord. Give us unity of mind and spirit. 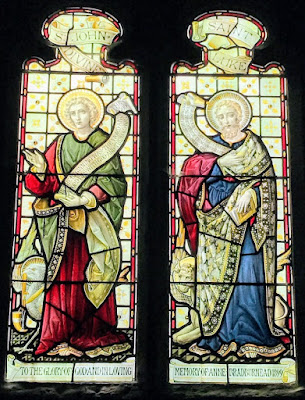 Saint John the Divine and Saint Luke … this window in Saint John’s Church, Wall, may also be the work of CE Kempe (Photograph: Patrick Comerford) 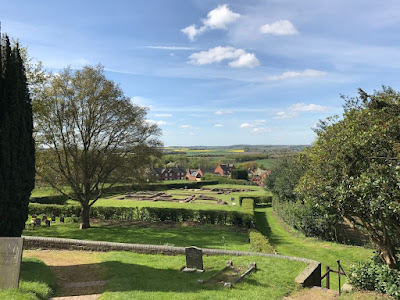 Looking down at the Roman site of Letocetum from the West Door of Saint John’s Church, Wall, south of Lichfield (Photograph: Patrick Comerford)