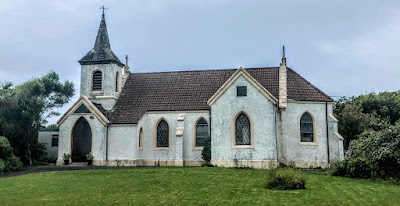 After visiting Spanish Point on the west coast of Clare, and the former Comerford Lodge, now Clare Cottage and once a Comerford family home, two of us visited Christ Church, Spanish Point. This church was built in 1927, and is one of the few Church of Ireland parish churches built in post-independence Ireland.

Although Christ Church is less than 100 years old, the history of the Church of Ireland in Spanish Point dates back to 1780, when Thomas Morony inherited his family’s lands in Miltown Malbay and Spanish Point, and moved from Limerick. He built a new house and turned to developing the area, building several public buildings and amenities.

At the time the first Church of Ireland parish church was in Miltown Malbay, rebuilt in 1804. Tourism was developing in the early 1800s, and people came to stay in Morony’s Atlantic Hotel and in the lodges in Spanish Point, and so a larger Church of Ireland community started to grow.

The parish church at Kilfarboy or Miltown Malbay and the surrounding graveyard were on an eighth century site. A 15th century church was replaced in 1804, but it was burned down in an arson attack on the night of 14 December 1922.

After the fire, rather than rebuild the church, parishioners and visitors formed a committee to build a new church at Spanish Point. While the church was being built, the dining room of the Rectory next door was used for Sunday services. At least two baptisms took place in the Rectory. The new committee included the Rector, the Revd David Elliott (later Canon David Elliott), several vestry members and house owners in the area. 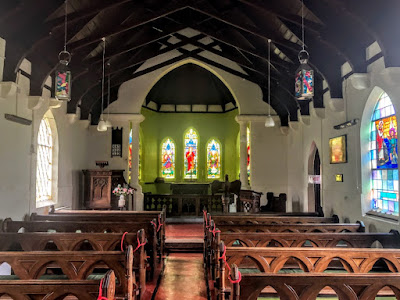 The church was designed by the architect and engineer William Henry Allen for the site in the Glebe Field beside the Rectory. The church was consecrated by Bishop Henry Edmund Patton of Killaloe on a sunny day in August 1927.

The architect William Henry Allen was born in Co Wexford at Merrion Lodge, William Street, Gorey, on 26 May 1871, the son of Dr John Burgess Allen. He studied for five years at the Royal College of Science, and received a Diploma in Engineering. He returned to live in Gorey in the 1890s, but moved to Ennis at the beginning of the 20th century. He was architect to the Diocese of Killaloe and Kilfenora until the 1940s.

Allen’s church in Spanish Point has been described as ‘Mediterranean Gothic’ in style. It has a two-stage tower with a concrete broach spire, a gabled porch, two-bay side elevations, a projecting vestry and a polygonal apse. There is a pitched and hipped clay red tile roof with cut-stone copings and two finial crosses. There are roughcast rendered walls, stepped buttresses, and a plat band. 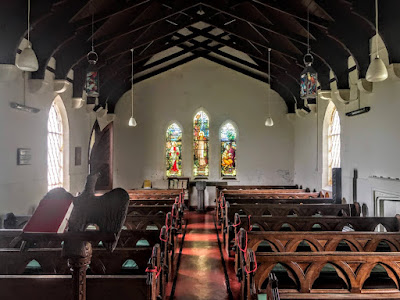 The inscription over the porch door quotes Psalm 100: 4, ‘Enter into his courts with praise.’ The date inscribed on the vestry gable is ‘1927.’

The church has timber matchboard doors, and the pointed arch openings with render architraves are filled with leaded and stained glass.

Families whose memorial plaques were destroyed in the fire in the old church five years earlier were invited to replace them with pieces of church furniture, stained glass and other items.

And so, apart from the pews, the new church was furnished in this way. For example, the altar was donated by the Morony family, who had donated the altar to Kilfarboy Church. 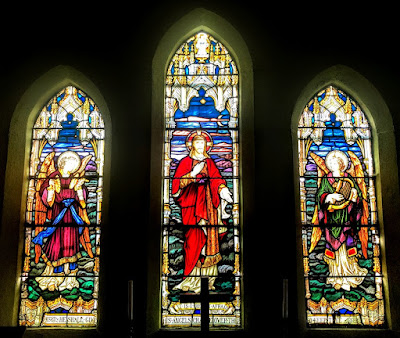 The three lancet windows above the altar in the chancel apse (Photograph: Patrick Comerford, 2021)

There are three lancet windows in the chancel apse at the east end of the church, donated by the Wise and Browning families. These are the work of the Jones and Willis studios of Liverpool and London and were installed in 1927. They draw specifically on the account of the Crucifixion and Resurrection in Saint John’s Gospel.

The larger, central window (2040 mm x 520 mm) shows Christ walking on water: ‘It is I, be not afraid’ (John 6: 20). This has been described as a Resurrection window, but Christ is without stigmata and the quotation is from tomorrow’s Gospel reading (John 6: 1-21), a setting long before the passion, death and Resurrection of Christ. 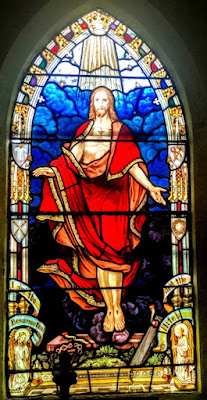 The Resurrection window on the north side of the apse (Photograph: Patrick Comerford, 2021)

Christ is surrounded by four symbols of the Passion: the seamless tunic (John 19: 23), four nails, hammer and tongs, and the crown of thorns (John 19: 2). 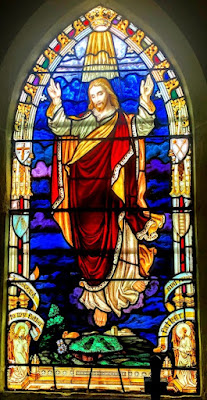 The Ascension window on the south side of the apse (Photograph: Patrick Comerford, 2021) 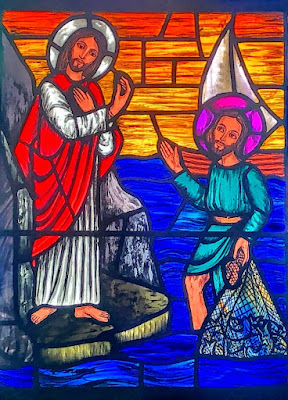 ‘The Call of the Disciples’ … a window designed by the Harry Clarke Studios (Photograph: Patrick Comerford, 2021)

The words below, ‘Follow me and I will make you fishers of men’ (Matthew 4: 19), are placed above a lobster and a crab. 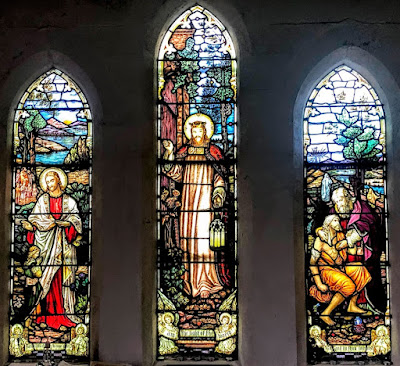 The three lancet windows at the west end are by the Watson studios in Youghal (Photograph: Patrick Comerford, 2021)

At the west end of the church, three lancet windows dated 1900 were donated by the Barrington, Morony and White families. The wording on the plaque below indicates they were salvaged from the church in Milltown Malbay.

These windows were made by the Watson studios in Youghal, which also made the windows in Sant Finbarr’s Oratory in Gougane Barra, and the Crowley family windows in Saint Patrick’s Church, Millstreet, Co Cork. 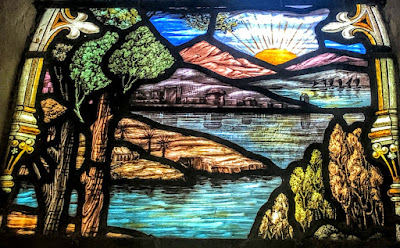 A vision of the heavenly kingdom in one of the Watson windows (Photograph: Patrick Comerford, 2021)

The smaller window on the left (1840 mm x 500 mm) shows Christ blessing the Children. The words below say: ‘Suffer little children to come unto me’ (Matthew 19: 14; Mark 10: 13; Luke 18: 15). Christ is blessing one girl, but above his right shoulder adults are following children into the kingdom, and above his left shoulder are some sheep, showing that this too is the Good Shepherd (John 10: 11, 14). In the top panel is an idealised image of the heavenly kingdom.

The spire of Christ Church was repaired in 2014, thanks to generous fundraising throughout the community in Miltown Malbay and Spanish Point. 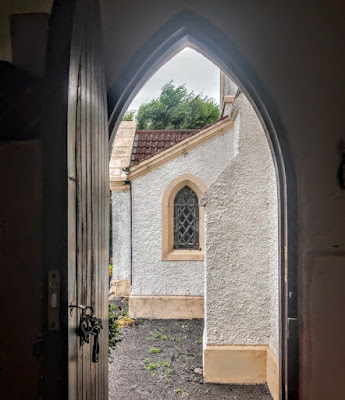 Looking out from the vestry in Christ Church (Photograph: Patrick Comerford, 2021)

Canon David William Matthew Albert Elliott (1885-1972), the Rector of Spanish Point when Christ Church was built, was ordained deacon and priest in 1910 and 1911. After curacies in Cloughjordan, Co Tipperary, and Ballingary, Co Limerick, he became Rector of Kilfarboy (Miltown Malbay) and Kilmanaheen in 1922.

Kilfarboy and Kilmanaheen parish was united with Kilfenora, Ennistymon, Lisdoonvarna and Lahinch in 1931, and Canon Elliott was a canon of Killaloe Cathedral from that year until he retired in 1965. He died in 1972.

Later, Spanish Point was added to Drumcliffe Union of churches, centred on Ennis. Today, the Rector of the parish is the Revd Kevin O’Brien. 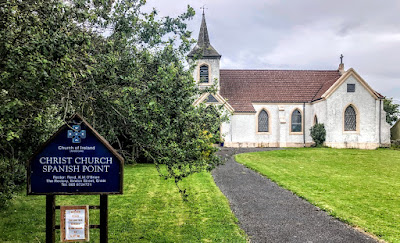 There are weekly Sunday services in Christ Church throughout the summer months (Photograph: Patrick Comerford, 2021)

There is a Sunday service in Christ Church, Spanish Point, every second and fourth Sunday in winter months and weekly in summer months, alternating between Morning Prayer and the Eucharist.

The churchyard at Kilfarboy, with a gate on the Flag Road, Miltown Malbay, is still in use today. 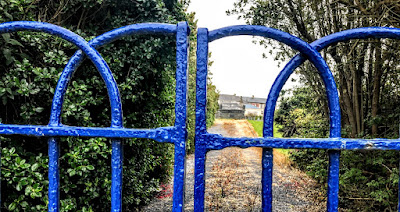 The churchyard at Kilfarboy in Miltown Malbay is still in use (Photograph: Patrick Comerford, 2021)

On the few times I’ve visited the church in Spanish Point, I’ve always been intrigued that our Lord seems to be wearing a chasuble in the central window at the East end. I can’t imagine chasubles would have been a very familiar sight in Church of Ireland around the time it was installed!

Interested to see that Canon David "Bertie" Elliott served as Curate in Ballingarry, Co. Limerick. I had assumed he was Curate-in-Charge in Ballingarry, Co. Tipperary, part of the Cloughjordan Union, as he was previously Curate in that union from 1910-1915. In some ways the Limerick parish makes sense, as the Moroney family appear to have been significant land-owners there, and in Miltown Malbay and Spanish Point, and could have influenced his appointment as Rector of Kilfarboy (if patronage still held any sway as late as the early 20th c.) Bertie was my grandfather's 1st cousin. I remember seeing him once, when I was a youngster.