The island oratory at
Gougane Barra linked
with Saint Finbarr 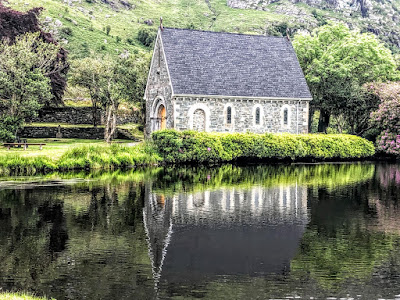 As last month’s week-long ‘road-trip’ or ‘staycation in Kerry and West Cork was coming to a close, two of us decided to return from Glengarriff to Askeaton through Gougane Barra in the Shehy Mountains in Co Cork.

This is an area of outstanding natural beauty, a place of pilgrimage associated with Saint Finbarr, and a pretty and popular location for wedding photographs.

The large valley and lake are enclosed by the sheer rock faces of mountains that rise to 370 metres from the base. The valley was carved out in the last Ice Age by a glacier, and the lake gives the optical impression of great depth. Gougane Beara is also the source of the River Lee that makes its way from the lake to Cork Harbour.

Gougane Barra (Guagán Barra, ‘the Rock of Barra’), west of Macroom and about 20 km north of the head of Bantry Bay, is off the road between Bantry and Macroom. The place takes its name from Saint Finbarr. 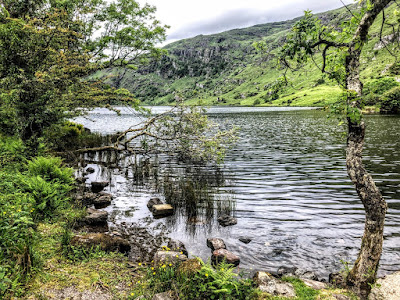 The valley was carved out in the last Ice Age by a glacier (Photograph: Patrick Comerford, 2021)

Tradition says Saint Finbarr built his monastery on the island in the lake in the sixth century, giving the area its name. Today, a small, picturesque chapel on the island is named after Saint Finbarr, although there are no surviving remains from the original monastery.

Legend says Saint Finbarr was guided by an angel to Gougane Barra to set up his cell. When he arrived, the lake was occupied by an enormous serpent, called Lú who, until then, had it all to himself. He resented the saint’s arrival and on one occasion arose and tore the chalice from his hands as he was celebrating Mass.

Saint Finbarr summoned Lú from the depths, and banished him forever from the lake. Lú left, thrashing his giant tail and such was his anger and strength that he carved a deep valley as he went. The water from the lake flowed into the valley and so the River Lee was formed. 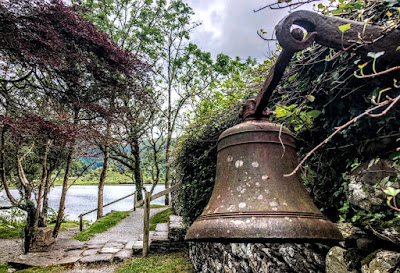 Saint Finbarr established a monastic settlement on the island in the sixth century (Photograph: Patrick Comerford, 2021)

Saint Finbarr was born ca 550 AD in Connaught, and baptised Lóchán. He was educated at Kilmacahil, Kilkenny, where the monks named him Fionnbharra (‘fair head’) because of his light hair.

He went on pilgrimage to Rome with some of the monks, who visited Saint David in Wales on the way back. On another visit to Rome, it is said, the Pope wanted to consecrate him a bishop but was deterred by a vision, telling the pope that God had reserved that honour to himself. Finbarr was consecrated from heaven and then returned to Ireland.

For a while, he lived as a hermit on a small island at Gougane Barry. For the last 17 years of his life, he lived on marshes at the mouth of the River Lee. His monastery there attracted many disciples, and is now the site of Saint Fin Barre’s Cathedral.

Supposedly the sun did not set for two weeks after he died ca 623 on his way back to Cork from Gougane Barra. He is the Patron Saint of Cork, and his Feast Day is 25 September. 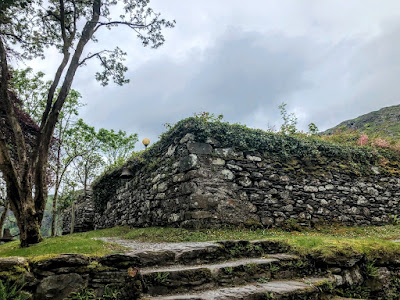 Nothing survives of Saint Finbarr’s monastic buildings. But the small island in the lake is home to the small, picturesque Saint Finbarr’s Oratory, built in the early 20th century, and the ruins of an earlier site founded around 1700 by Father Denis O’Mahony.

The remains of the monastery or retreat built by Father O’Mahony in honour of Saint Finbarr include a number of cell structures and a cross. It is said one of these cells belonged to Saint Finbarr, but there is no evidence to support this. Gougane Barra’s remote location at the time made it a popular place for Penal-era Masses and pilgrimages.

The oratory on the island dates from 1901-1903. It is known for its picturesque location and its richly decorated interior, and it has an important place in the history of the Arts and Crafts Movement in Ireland. 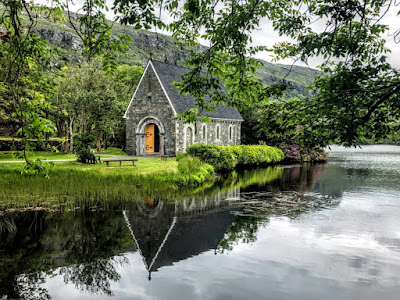 The present oratory was the vision of Father Patrick Hurley and was designed by Samuel F Hynes (Photograph: Patrick Comerford, 2021)

The vision for the present oratory was developed by Father Patrick Hurley, who also developed the ‘ancient’ monastic settlement on the island. A scholarly priest, versed in the Revivalist art and literature of the period, he specified that the oratory should be built in a mix of Hiberno-Romanesque and Byzantine styles, with details based on 12th century Irish churches such as Cormac’s Chapel on the Rock of Cashel.

Hurley financed the oratory through two wealthy Irish-Americans, and was officially opened on the Feast of the Assumption, 15 August 1901.

The architect was Samuel F Hynes of Cork, and the interior decoration was designed by Michael Buckley of Youghal, Co Cork, and Bruges, Belgium. 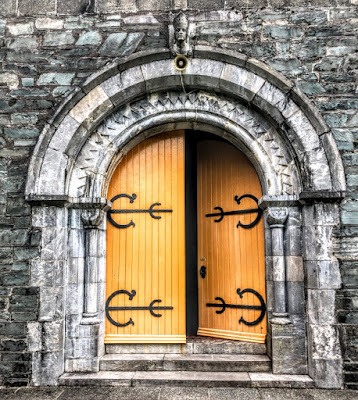 Many details of the oratory were inspired by Cormac’s Chapel on the Rock of Cashel (Photograph: Patrick Comerford, 2021)

The architect Samuel Francis Hynes (1854-1931) was born into an old Cork family. From 1869, he was a pupil of William Atkins in Cork five years. He then travelled on Continental Europe before setting up his own practice in Cork in 1875. Two of his early designs were for the chapel of the Convent of Mercy, Bantry, and the De Vesci Memorial in Abbeyleix.

Hynes practised from South Mall, Cork, for over 40 years. The greater part of his commissions came from the Catholic Church and religious orders. He was part of a wider group of late 19th century architects commissioned to create new symbolism for an increasingly confident Catholic Church. He retired in 1929 and died in 1931.

The walls of the oratory are of mountain stone, relieved by dressings of limestone. The roof, like Cormac’s Chapel. was originally of stone, necessitated by the heavy rains that prevail in mountain districts. 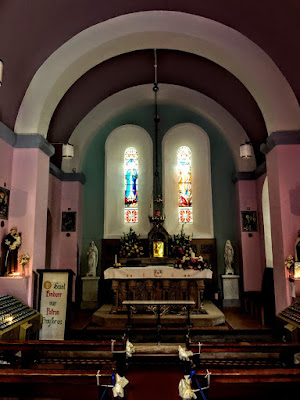 Inside the oratory … the interior was designed by Michael Buckley of Youghal (Photograph: Patrick Comerford, 2021)

Inside is an elegant barrel-vaulted, a freestanding altar, important stained-glass windows, intricate stone carvings, and only four rows of small pews.

The altar, furnishings and stained-glass windows were designed by Michael Joseph Cunningham Buckley (1847-1905), an antiquarian and designer of church furnishings, who worked out of London, Youghal, Co Cork, and Bruges in Belgium, from the 1860s until his death.

Buckley was a son of John George Buckley, of Carrick-on-Suir, Co Tipperary. When John Buckley was emigrating to Newfoundland as a young man, he was captured by a French privateer and taken as a prisoner to France, where he was held for some time. 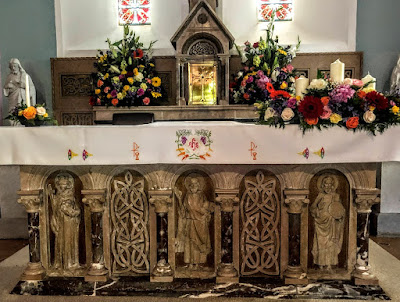 The intricately-carved altar in the oratory, with Celtic motifs (Photograph: Patrick Comerford, 2021)

Michael Buckley was born in Cahir, Co Tipperary, in 1847 or 1848, and educated at Mount Melleray Abbey, Cappoquin, Co Waterford, and in Louvain. He became a partner in the firm of Cox and Buckley, ecclesiastical art manufacturers in London, in 1881.

However, when Cox and Buckley failed, Buckley suffered severe financial losses. He returned to Ireland and set up a stained glass and metal works in Youghal. He was also an agent and designer for the Decorative Arts Guild of Bruges.

Buckley’s other works include the design and installation in Carlow Cathedral in 1899 of the Bishop Michael Comerford Memorial Pulpit, the work of Peter de Wispelaere of Bruges, and the oak stalls in Saint Canice’s Cathedral, Kilkenny. Buckley had a particular interest in ecclesiastical art and architecture, and contributed regularly to arts, antiquarian, historical and archaeological journals.

Buckley was about to bring some Belgian art workers to Youghal when he died in Youghal in 1905. His firm was taken over around 1903 or 1904 by James Watson & Co of Youghal, who completed the oratory in Gougane Barra. 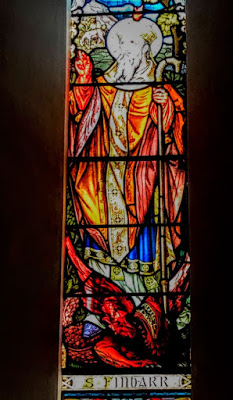 Saint Finbarr in a Watson window in the oratory (Photograph: Patrick Comerford, 2021)

Apart from a Marian image, all the windows in the oratory depict Irish saints, some of whom are local to Cork: Saint Finbarr, Saint Ita, Saint Brendan, Saint Fachtna, Saint Gobnet and Saint Eltin.

Until the 1930s, the area was given over to smallholdings. The farmers were relocated and Coilte (the Department of Forestry) began developing Gougane Barra in 1938 as a commercial forest. They planted Lodgepole pine, Japanese larch and Sitka spruce the only species that would survive on the poor soil. Here too is a large number of native species of flora and fauna. 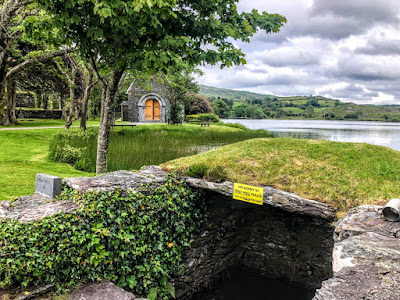 Today, Gougane Barra Park has 5 km of roads and 10 km of hiking and biking trails. There are six different walking trails in the forest park, varying in length and difficulty, although none is exceptionally long. A looped trail offers views of the valley and the surrounding countryside.

Even the eye-catching thatched public toilet tucked away in the forest park but close to the church has made its own reputation. It won the prize for the top toilet in Ireland in 2002, and it is listed in the Lonely Planet guidebooks among the most memorable outdoor public lavatories in the world.

The learning associated with Saint Finbarr gives rise to a popular Irish saying, Ionad Bairre Sgoil na Mumhan, ‘Finbarr’s foundation, the School of Munster.’ A version of this is the motto of University College Cork, ‘Where Finbarr taught let Munster learn.’ 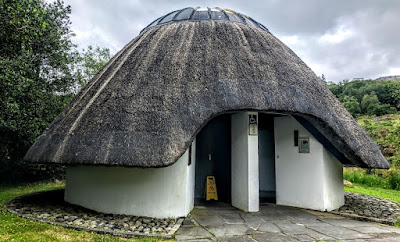 Even the eye-catching thatched public toilet at Gougane Barra is a prize winner (Photograph: Patrick Comerford, 2021)