The Greeks have a word
for it (19) Pharmacy 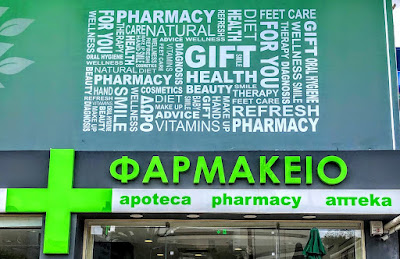 Greek pharmacies deal with everything, from Advice to Vitamis and Wellness (Photograph: Patrick Comerford, 2021)

While I was in Crete some years ago, I blogged regularly about Greek words that we have adapted and integrated into the English language.

Later, during a visit to Athens the following year, I added the words Theatre (θέατρον) and Drama (δρᾶμα).

I thought I might add a few more words to this lexicon during the time I am spending in Crete over these two weeks.

Before leaving Askeaton, I made sure to visit my local pharmacist last week to make sure I had enough medication for these weeks, needed to control the symptoms of my Sarcoidosis and my B12 deficiency.

Most of us probably call them pharmacists today, but when I was growing up their shops were generally known throughout England and Ireland as ‘chemists.’ Today, we are more likely to associate the label ‘chemists’ with people who work in laboratories or even in industry.

The rise of loud-mouthed anti-vaxxers is giving a bad name to any profession or industry that begins with a prefix that sounds like ‘pharma-.’ Yet, I sometimes think that having a good relationship with your pharmacist is akin to having a good relationship with your GP, although I care little for the many ‘extras’ that seem to clutter the display shelves in pharmacies, from sweets and sun cream to cosmetics and hair care products

Perhaps it was ever so. In my childhood ‘the chemist’ also barley sticks, olive oil and Buckfast ‘tonic wine,’ and often had a penn wieghing machine on the street outside.

Of course, the words pharmacist and pharmacy come from Greek. The words came into English from the Old French farmacie, a substance, such as a food or in the form of a medicine, that has a laxative effect. This, in turn, was derived from the mediaeval Latin pharmacia, which comes from the Greek pharmakeia (φαρμακεία), ‘a medicine,’ which derives from pharmakon (φάρμακον), meaning ‘drug, poison, spell,’ which is etymologically related to pharmakos (φαρμακός), the ritual sacrifice or exile in ancient Greek religion of a human scapegoat or victim.

Pharmacies in Greece are different places these days – no more scapegoating, for example, or beating Aesop to death – and they are very different from pharmacies in England or Ireland.

For one, they have different opening hours. There is always a pharmacy open 24 hours a day, seven days a week in most large town and cities in Greece.

If you find a pharmacy and it is closed, a calendar in the door or window tells you where to find one that is open.

Secondly, if you are on medication at home, it helps to know the ‘generic name’ that it is also known by. Greek pharmacists are very helpful when it comes to looking for their version of a medication. Indeed, if you have an empty prescription container, it often happens that you do not need a paper prescription.

And thirdly, for Greeks, the local pharmacist is the first point of contact for any complaint or to seek medical advice.

Perhaps this explains how a recent study found that Greece has the largest number of pharmacists, per inhabitant, in Europe. On a per capita basis, there are more than twice as many pharmacists in Greece as in France or Spain, and an astonishing 17 times as many as in Denmark.

Greece is one of the few EU member states that sets prices for over-the-counter drugs, such as aspirin, and restricts their distribution solely to licensed pharmacies. Regulations limit the ownership of pharmacies to actual pharmacists, each pharmacist is allowed to own only one outlet, and pharmacy owners must employ one actual pharmacist for every three assistants.

In his essay ‘Plato's Pharmacy,’ the French philosopher Jacques Derrida deconstructs several texts by Plato, such as Phaedrus, and reveals the inter-connection between the word chain pharmakeia-pharmakon-pharmakeus and the notably absent word pharmakos.

In doing so, he attacks the boundary between inside and outside, declaring that the outside – pharmakos, never uttered by Plato – is always-already present right behind the inside: pharmakeia–pharmakon–pharmakeus.

But if you are visiting Greece, you will realise soon that the local pharmacy is one of the places you are not going to feel like an outsider. They are friendly, welcoming, knowledgeable, erudite and cultured … which makes them sound like my GP in Dublin and my pharmacist in Askeaton all rolled into one.

One of my favourite pharmacies in Rethymnon has always been to the fore in helping refugees, migrants and asylum seekers … a good way to challenge scapegoating and to break down the barriers between inside and outside. 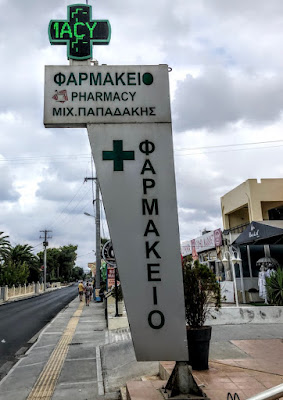