A weekend in Liverpool 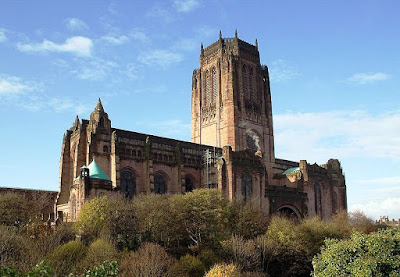 I was supposed to be here earlier this year to speak at the Annual Conference of Affirming Catholicism in Liverpool Hope University and Liverpool Cathedral, but the venue was later switched to Westminster.

For many, Liverpool is the city of Anfield (Liverpool) and Goodison Park (Everton), of the Beatles, the Cavern Club and the Mersey Beat, the city of Aintree and the Grand National, the city of Scousers, the Liverbirds and Brookside.

But this is also the city of the Tate Liverpool, of the Walker Art Gallery, of Saint George’s Hall – the first European offering of neoclassical architecture – and thiswas also the European Capital of Culture three years ago, and in 2004 the whole of the waterfront and the docks was declared a Unesco World Heritage Site.

There are more listed buildings in Liverpool than in any other English city, apart from London. And among these is Liverpool Cathedral, which stands on Saint James’s Mount.

There are two cathedrals in Liverpool: the Roman Catholic Metropolitan Cathedral of Christ the King is about half a mile north. Once nick-named “Paddy’s Wigwam,” it was designed by Sir Frederick Gibberd. But the original plan was by Sir Edwin Lutyens, who is buried in the crypt. The two cathedrals are linked by Hope Street, named after William Hope, a local merchant whose house stood on the site now occupied by the Philharmonic Hall and named long before the cathedrals were built.

Liverpool’s Anglican Cathedral is the largest cathedral in the Church of England, and the longest and fifth largest in the world: the external length, including the Lady Chapel, is 189 metres (620 ft), while its internal length is 146 metres (479 ftThe belltower is the largest and one of the tallest, in the world, and houses the world’s highest (67 m) and heaviest (31 short tons) ringing peal of bells.

The magnificent central space of the cathedral stretches east from the bridge towards the choir and the high altar. The central space dominates the view of the cathedral and its enormity gives an impression of Sir Giles Gilbert Scott’s vision of our relationship with God. This central space has witnessed a variety of services, occasions and events over the years with congregations up to 2,000 in number experiencing tremendous fulfilment, delight, enjoyment and deep spirituality, in an variety of worship and celebration services, special events and exhibitions.

When John Charles Ryle (1816-1900) became the first Bishop of Liverpool in 1880 on the recommendation of Benjamin Disraeli, his new diocese had no cathedral. Saint Peter’s Parish Church served as a “pro-cathedral,” but it was too small for major church events, and the Rector of Liverpool at the time described it as “ugly and hideous.”

An Act of Parliament in 1885 authorised building a cathedral on the site of Saint John’s Church, beside Saint George’s Hall. But the site was unsuitable for the proposed building and the scheme was abandoned.

Bishop Francis Chavasse (1846-1928), a former principal of Wycliffe Hall in Oxford, succeeded as the second Bishop of Liverpool in 1900 and immediately revived the project to build a cathedral in the face of opposition from some evangelical clergy, who argued there was no need for such expense.

Although Chavasse was an Evangelical too, he envisaged a cathedral as “a visible witness to God in the midst of a great city.” The site at Saint John’s site was abandoned, and a new site was chosen at Saint James’s Mount.

Half a century ago, the cathedral historian Vere Cotton wrote that, “with the exception of Durham, no English cathedral is so well placed to be seen to advantage both from a distance and from its immediate vicinity. That such a site, convenient to yet withdrawn from the centre of the city … dominating the city and clearly visible from the river, should have been available is not the least of the many strokes of good fortune which have marked the history of the cathedral.”

The stipulations for the cathedral design insisted in must be in the Gothic style. Robert Gladstone, a member of the committee involved in selecting the architect for the project, said at the time: “There could be no question that Gothic architecture produced a more devotional effect upon the mind than any other which human skill had invented.” Pugin would have been delighted.

But the stipulation stirred controversy, and Reginald Blomfield and others protested, describing the Gothic style as a “worn-out flirtation in antiquarianism, now relegated to the limbo of art delusions.” Eventually it was agreed the assessors would also consider “designs of a Renaissance or classical character.”

However, Bodley’s collaboration with the young Scott became fractious, especially after two cathedral commissions in the US made Bodley’s absences from Liverpool frequent. Scott was on the point of resigning when Bodley died suddenly in 1907. Free of Bodley and growing in confidence, Scott submitted an entirely new design for the main body of the cathedral, which was approved in 1910. 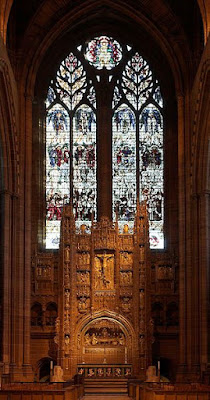 The cathedral was built mainly of sandstone quarried – well, the Beatles did first call themselves The Quarrymen. The Lady Chapel, originally intended to be called the Morning Chapel, was consecrated by Bishop Chavasse on Saint Peter’s Day, 29 June 1910 – a date chosen to honour the pro-cathedral, now about to be demolished.

It seems the richness of the décor of the Lady Chapel dismayed some of Liverpool’s evangelical clergy, upset that were presented with “a feminised building which lacked reference to the ‘manly’ and ‘muscular Christian’ thinking which had emerged in reaction to the earlier feminisation of religion.” To many, the new cathedral seemed to be too Anglo-Catholic in design.

Work was severely limited during World War I, but the first section of the main body of the cathedral was complete by 1924, including the chancel, the ambulatory, the chapter house and the vestries. On 19 July 1924, the 20th anniversary of the laying of the foundation stone, the cathedral was consecrated by Bishop Chavasse in the presence of King George V.

In October 1931, Frederick William Dwelly became the first Dean of Liverpool, a position he held until his retirement in 1955. Once again, Scott revised his plans, this time for the tower, the under-tower and the central transept, hoping to complete the cathedral by 1940. However, work was interrupted during World War II, and the building was damaged by German bombs. Nevertheless, the central section was completed by 1941 and was handed over to the Dean and Chapter. Scott laid the last stone of the last pinnacle in 1942, but work did not resume until 1948 and the bomb damage, particularly to the Lady Chapel, was not fully repaired until 1955.

When Scott died in 1960, the first bay of the nave was nearly complete, and it was handed over to the Dean and Chapter in 1961. Scott was succeeded as architect by Frederick Thomas, who designed for the west front, where the crowning glory is the Benedicite Window, designed by Carl Edwards and covering 1,600 sq. ft.

The building was finally completed in 1978, and a service of thanksgiving and dedication that October was attended by Queen Elizabeth II and with the Roman Catholic Archbishop Derek Worlock playing a major part.

More recently, Dean Rupert Hoare introduced a new constitution and statutes for the cathedral. The chapter was clear that entrance charges should not be introduced for visitors, and tried to make the building more accessible to a wide variety of worshippers, the diocese, the city, other organisations, visitors and tourists.

The cathedral celebrated its centenary in 2004, and today it is pivotal to the spiritual needs and the worship life of Liverpool, echoing the history of this great city.

Today, Sir Giles Gilbert Scott is also remembered as the designer of the red telephone box, the now defunct Battersea Power Station, and the Bankside Power Station in London, now the Tate Modern. But his other works include the Memorial Court (1923-1934) at Clare College, Cambridge, and the University Library on West Road, Cambridge, much criticised for looking more like a “crematorium or a power station.”

Although he never saw the final consecration of his cathedral, Scott can be seen in Liverpool Cathedral today in the bottom left of the Layman’s Window, wearing a blue coat.