Staying over in Virginia 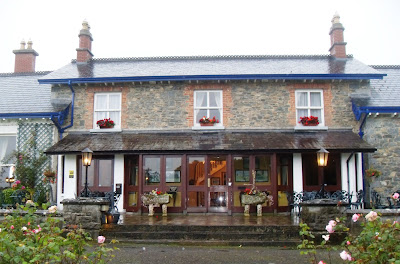 The Park Hotel, Virginia ... once the hunting lodge of the Taylour family (Photograph: Patrick Comerford)

During the special Church of Ireland conference in the Slieve Russell Hotel, Ballyconnell this [Friday and Saturday], I have been blessed to be a guest in Virginia, Co Cavan, of a long-time friend, the Ven Craig McCauley, who is Archdeacon of Kilmore and Rector of Lurgan.

Lurgan is the name of the Church of Ireland parish in Virginia, a small town on the Cavan/Meath border with a population of about 4,000. The town stands close to the shores of Lough Ramor, and is planning later this year to mark the 400th anniversary of its foundation in August 1612.

Virginia is on the N3, about 85 km north-west of Dublin. Although Virginia is known in Irish as Aghanure (Achadh an Iúir, “field of the yew”), its origins lie in the Plantation of Ulster and the town was named Virginia after the “Virgin Queen,” Queen Elizabeth I, who also gave her name to Virginia in the US.

Virginia began as a part of the Ulster Plantation in August 1612, when an English adventurer, John Ridgeway, was granted a Crown Patent to build a new town mid-way between Kells and Cavan. The conditions of settlement included introducing English settlers to the area and building the town to incorporated borough status.

However, Ridgeway found it difficult to attract sufficient English trades-people and settlers to a hostile territory outside the Pale. He passed his patent on to Captain Hugh Culme, who already held lands on the shores of Lough Oughter in Co Cavan. Culme persuaded the Plantation Commission to move Virginia to its present location close to the Blackwater River. However, he too failed to meet the Commission’s time frame for developing the town and gave up on the task.

In November 1622, the Virginia estate passed to Lucas Plunkett, Earl of Fingall, who held extensive lands around Co Meath and who undertook to complete the project. But in 1638, Virginia’s residents complained to the Commission about slow progress, and Christopher Plunkett, 2nd Earl of Fingall, was ordered to submit a substantial bond with the Commission court and to build the church in Virginia or forfeit his Co Cavan lands.

The Church of Ireland Bishop of Kilmore, William Bedell, undertook to lay out the town, but the events that led to the Rebellion of 1641and Irish Confederate subsequent wars enveloped Virginia, with widespread destruction and depopulation. In 1642, government forces destroyed the castle and burned of stocks of hay, corn and turf in a bid to punish the outlawed Earl of Fingall for besieging of the garrison at Drogheda. When the wars came to an end in 1660, Virginia was left with a tiny resident community.

The Virginia estate was sold around 1750 by the Plunkett family to pay off mounting debts, and was bought by Thomas Taylor, Lord Headfort, who had plans to continue developing the town that others had failed to build.

The Taylor (later Taylour) family turned their attention to making the unproductive lands around Virginia into profitable farms through land drainage and afforestation. The town also became a strategic staging and resting point for coaches between Enniskillen and Dublin,

These improvements brought employment along with markets and fairs to Virginia, and the population soon doubled in population. On the shores of Lough Ramor, the heirs of the Taylour family, which held the titles of Lord Headfort, Earl of Bective and Marquess of Headfort, created their own private demesne and a hunting lodge, now the Park Hotel.

The Headfort family built their hunting lodge on the shores of Lough Ramor (Photograph: Patrick Comerford)

Virginia recovered quickly after the Famine, and in the following years a Butter market was built in 1856, and a railway line opened between Kells and Oldcastle in 1863.

Virginia’s most famous Virginia emigrant was Philip H. Sheridan, who left Ireland around 1830 and became a famous general in the American Civil War. Other famous people associated with Virginia are Dean Jonathan Swift, who wrote Gulliver’s Travels while staying nearby at Quilca, the home of his clerical friend and colleague, the Revd Thomas Sheridan, later became headmaster of Cavan Royal School. The playwright Richard Brinsley Sheridan was descended from the same family.

The Church of Ireland parish is known as Lurgan. Admiral Sir Josias Rowley was a brother of the Revd John Rowley, Rector of Lurgan, and helped to finance rebuilding the parish church after a major fire on Christmas Night 1830.

Virginia has been home to the Virginia Agricultural Show for over 60 years, has twice won the Tidy Towns Competition in the mid-1960s. The local industry today consists mainly of farming and milk processing, including cream for Bailey’s Irish Cream liqueur, and is home to Ireland’s only Pumpkin Festival.
Posted by Patrick Comerford at 12:30