Art for Lent (7): ‘The Seven Last Words
from the Cross’ by Iain McKillop 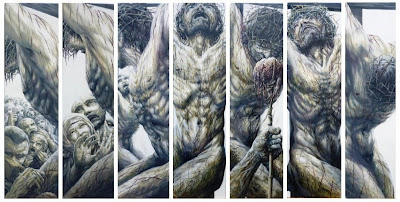 ‘The Seven Last Words from the Cross’... seven paintings by Iain McKillop in the exhibition ‘Words of Forgiveness and Hope’ in Lichfield Cathedral

For my choice of works of art as part of me Lenten meditation and prayer this morning [11 March 2014], I have selected the Revd Iain McKillops’s ‘The Seven Last Words from the Cross.’ These seven paintings are part of Iain McKillop’s current exhibition, ‘Words of Forgiveness and Hope,’ in Lichfield Cathedral.

The exhibition opened in Lichfield Cathedral last Wednesday, Ash Wednesday [5 March 2014], and continues until the First Sunday after Easter [27 April 2014].

The Revd Iain McKillop is a painter and art historian, an Anglican priest and curate of Effingham and Little Bookham in the Diocese of Guildford. His exhibitions regularly tour British cathedrals, and he lectures widely on issues of Faith and Art.

The present Lent exhibition in Lichfield Cathedral has been in the planning process for several years, and brings together his completed works for the first time.

This series of life-size paintings is on exhibition in Lichfield Cathedral throughout Lent and is offered as a form of visual prayer, contemplating the themes of hope and salvation. It feels for those in pain or struggling in life, particularly the plight of so many innocent people who suffer as a result of war.

The exhibition is a series of stations, encouraging the visitor to make a pilgrimage around the cathedral to contemplate and pray. It consists of 21 paintings:

1, ‘Gethsemane’ (exhibited in the Lady Chapel): seven paintings exploring Christ’s inner struggle, responding to the needs of the world, and which i discussed yesterday [10 March 2014];

2, ‘The Seven Last Words from the Cross’ (North Aisle), my choice for meditation and prayer this morning;

3, ‘The Seven Songs of Resurrection’ or Christ’s Resurrection appearances (South Aisle), which I hope to discuss at a later stage.

The paintings are intended as a memorial to innocent lives taken as a result of war, in all nations. Iain’s contemplation while painting convinced him of the inhumanity of using destruction or warfare to try to solve political or social problems. The images ask us to learn new ways, following the loving, self-sacrificing, forgiving, non-recriminatory, peace-bringing example of Christ.

Iain’s panels are an expressive-realist response to those artworks, as tributes to all who suffer. They take the form of 4ft high beams – reminiscent of the beam of the Cross or rafters of houses – on which he has painted fragments of life-size Crucifixion or Resurrection scenes.

Iain initially conceived the ‘Words of Forgiveness and Hope’ during a tour of Wurzburg with a German artist friend and their partners. They were horrified by the extensive bombing of the historic, mediaeval and baroque city on 16 March 1945. Many British cities suffered similarly during the Blitzkrieg.

Wurzburg had no strategic military or industrial importance. The city was targeted primarily because its historic buildings would burn easily. On that one night, 225 Lancaster bombers following 11 Pathfinders targeted the city centre, releasing 1,127 tons of bombs, including around 370,000 incendiaries in just 17 minutes.

Tragically and with little warning, the inhabitants found few escape routes. Almost 5,000 innocent citizens died, either in the bombing or the ensuing firestorm, or by drowning in the river while they tried to escape. In all, 82% of the city was destroyed: 21,062 homes, the cathedral, 36 churches, the Episcopal Palace, and part of the historic Prinz-Bishop’s Wurzburg Residenz, including the beautiful Hall of Mirrors – its famous fresco by Tiepolo survived only because the ceiling construction was especially strong.

For Iain, the most poignant artworks in the city to survive are religious sculptures by Tilman Riemenschneider and life-size Stations of the Cross by the sculptor Johann Peter Alexander Wagner, leading up 352 steps to Kaepelle, Balthasar Neumann’s Pilgrim Church.

The Seven Last Words from the Cross

The Seven Last Words from the Cross were first used as part of the Liturgy of the Passion in Iain’s own parish church in Surrey on Good Friday last year.

These seven paintings show Christ identifying with the pain of the world, forgiving those who persecute, giving us into each other’s hands for mutual support, dying to cleanse and restore human peace with God.

The Seven Last Words from the Cross on exhibit in the North Aisle of Lichfield Cathedral are:

This exhibition in Lichfield Cathedral is accompanied by a thought-provoking programme of six lunch-time Lenten lectures in the Nave, exploring the meaning of Lent and preparing for Holy Week.

Last week [Thursday 6 March], the Rev’d Iain McKillop spoke on ‘Personhood.’ This week [Thursday 13 March], Canon Rose Hudson-Wilkin, Chaplain to the Speaker of the House of Commons, is speaking on ‘Ethnicity and Nation State.’

For more details about ‘Words of Forgiveness and Hope,’ which continues until 27 April, visit Lichfield Cathedral’s website or contact Jo Hoffman, Communications and Marketing Officer, Chapter Office, 19A The Close, Lichfield Cathedral, Lichfield, WS13 7LD. The Revd Iain McKillop’s work can be seen on his website.

Tomorrow: ‘Advent and the Triumph of Christ’ (1480) by Hans Memling. 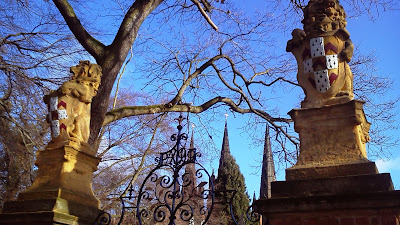 The three spires of Lichfield Cathedral seen from the Garden of Remembrance (Photograph: Patrick Comerford, 2014)