The brave and plucky performances by Wales and Iceland lifted the spirits of everyone during the UEFA European championships this summer. Wales kept high the hopes of these islands for an extra week or more after the Republic of Ireland, Northern Ireland and England were eliminated one by one at the end of June and the beginning of July.

This was the best performance by Wales in international soccer since reaching the World Cup quarter finals in 1958. My eventual late support for Wales followed the elimination of the other island nations, and passions ran high in bars across Crete as tourists clustered and huddled around televisions bars in the resorts.

It all brought back happy memories of a visit to Wales just before summer. I had gone to visit Portmeirion, the romantic village built by Sir Clough Williams-Ellis, and to see remote Frongoch, where Irish revolutionary leaders were kept prisoner after the 1916 Rising. 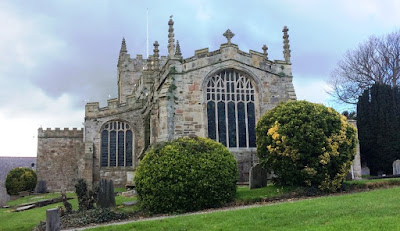 The parish church of Saint Mary and Saint Nicholas was built around 1330 in the heart of the new, walled town of Beaumaris (Photograph: Patrick Comerford, 2016)

But was I captivated too by Anglesey. We were staying in Beaumaris on the south-east corner of Anglesey. Architecturally, the town is dominated by the castle Edward I, and completed in 1296. The Welsh view of the building of the castle is expressed in Richard Liwyd’s poem ‘Beaumaris Bay’:

Here earth is loaded with a mass of wall
The proud insulting badge of Cambria’s fall
By haughty Edward raised; and every stone
Records a sign, a murder or a groan. 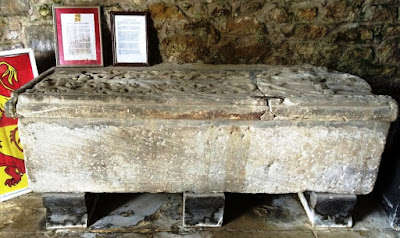 The stone tomb of Princess Joan of Wales inside the south porch in Beaumaris (Photograph: Patrick Comerford, 2016)

The new town was populated with people mainly from Lancashire and Cheshire, including the Bulkeley family. The parish church of Saint Mary and Saint Nicholas was built in the heart of the new, walled town ca 1330. The oldest parts of the church date from the 14th century, while the chancel was rebuilt around 1500. Later additions date from the 19th century.

Inside the south porch, the stone tomb of Princess Joan of Wales is older than the church itself. Princess Joan was an illegitimate daughter of King John of England and married to Llywelyn ap Iorwerth, or Llywelyn the Great, then Prince of Wales. When she died in 1237, Joan was buried at the Franciscan Friary her husband had founded in Llanfaes. When the friary was suppressed at the Reformation, Joan’s tomb was lost. Centuries later it was found in Beaumaris being used as a water trough for horses; it was rescued and moved into the church. 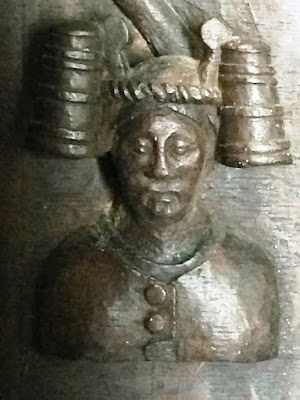 The misericords in Beaumaris date from the late 15th and early 16th century (Photograph: Patrick Comerford, 2016)

The church has a unique collection of misericords from the 15th and 16th centuries, decorating the undersides of the seats in the choir stalls. They include a bearded pope, a woman in a crown with a wimple and a hood, and a woman with a crown of roses. One carving depicts a woman with a pair of tankards filled with ale balanced on her head. Perhaps she brought drinks to the woodcarvers as they worked. 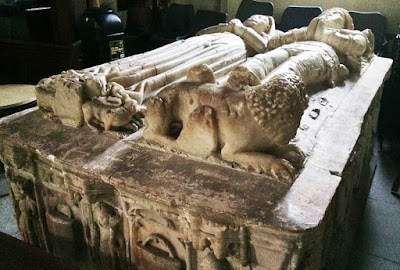 The church has an impressive alabaster altar tomb of William Bulkeley, who died in 1490, and his wife Elin, lying side-by- side, with William’s feet resting on a lion. Around its base, the tomb is decorated with figures of bishops and saints.

Sir Richard Bulkeley (1533-1621) was appointed Constable of Beaumaris Castle in 1561 and became the first Mayor of Beaumaris in 1562. In 1563, he was elected MP for Anglesey for the first time, and he became High Sheriff of Anglesey in 1570. He was accused of oppressing the people of Beaumaris, and of being involved in the Babington plot in 1586. But he was cleared and became one of Queen Elizabeth’s courtiers.

Bulkeley’s younger half-brother, Lancelot Bulkeley (1568-1650), remained rector of two parishes in the Diocese of Bangor when he was appointed Archdeacon of Dublin in 1613. He became Archbishop of Dublin in 1619, and he provoked a riot in Dublin in Christmas 1628 when he tried but failed to prohibit the public Roman Catholic celebration of the Mass.

In 1635, Archbishop Bulkeley built Old Bawn House near Tallaght. The house was built in a late Tudor style, with high pointed gables, many windows, 12 chimneys and a chimneypiece reaching to the ceiling that depicted the building of the walls of Jerusalem. The house probably had a moat and drawbridge, and there was a large pleasure garden.

Throughout the Cromwellian wars, Bulkeley remained a loyal Anglican, and he was jailed in 1647 for resisting the prohibition of the Book of Common Prayer. After the execution of Charles I, all Bulkeley’s honours, privileges, castles and estates were confiscated in 1649. When he died a year later in Tallaght, he was buried in Saint Patrick’s Cathedral.

Old Bawn House fell into disrepair in the early 1900s, and the chimneypiece and a carved oak staircase were moved to the National Museum. It was used as a storehouse when the surrounding lands were being developed for new housing in the 1960s. I still remember the storm 40 years ago when the House was finally demolished in 1976.

Back in Beaumaris, Archbishop Bulkeley’s cousins remained prominent in politics and public life. When Thomas Bulkeley (1585-1659) became Governor of Beaumaris Castle, Charles I gave him the Irish title of Viscount Bulkeley of Cashel, Co Tipperary, in 1644.

After the Restoration, the office of Governor of Beaumaris Castle passed from one generation to the next in the family until the death of the last Lord Bulkeley in 1822. 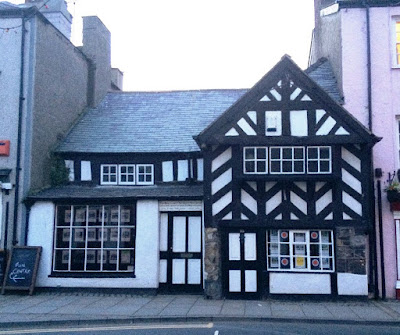 Tudor Rose, a Tudor house on Castle Street is reputed to be one of the oldest houses in Britain (Photograph: Patrick Comerford, 2016)

The Tudor dynasty was descended from the Tudors of Anglesey, and so I was on the lookout for Tudor buildings in Beaumaris.

Tudor Rose, the Tudor house on Castle Street, dates from 1416 and is said to be one of the oldest houses in Britain.

Nearby, the George and Dragon on Church Street claims to be one of the oldest pubs in Wales. Despite the Georgian façade, the pub dates back to 1410, and inside it has a timber frame, exposed beams and a fireplace dating back hundreds of years.

One of the roof trusses bears a painting the Sacred Heart of Christ, and a Latin prayer from 1610. Oliver Cromwell is said to have stayed there in 1643, and two Cromwellian soldiers were court-martialled for being drunk in the inn – although there is no record of what Cromwell thought of the Catholic symbolism and Latin prayers.

Around the corner, the Red Boat Ice Cream Parlour at 34 Castle Street looks like an ordinary shop. But inside it is a mediaeval hall house, about as old as the George and Dragon, and a Tudor Rose adorns one of the trusses.

Folklore says the Tudor Rose was built around 1400, although the earliest timbers date from the 1480s (Photograph: Patrick Comerford, 2016)

But the family is still remembered in names and initials embossed on buildings around Beaumaris and the East Window in the parish church commemorates a member of the Williams-Bulkeley family killed during World War I.

Between Beaumaris and Holyhead, it was impossible to resist the signs pointing to Llanfairpwllgwyngyll or Llanfair Pwllgwyngyll, the village that boasts the longest name in Europe. 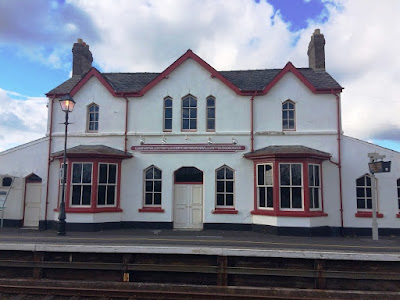 Signs at the railway station spell out the name in full the longest placename on these islands (Photograph: Patrick Comerford, 2016)

Most of the 3,000 people there speak Welsh, so they know how to pronounce the name and know what it means. But most refer it as Llanfairpwll, even as Llanfair PG. The long name, with 58 characters, was invented for promotional purposes in the 1860s, and refers to a little church in a hollow. Few tourists find the church, but all want to be photographed with the name at the train station or on the platform. 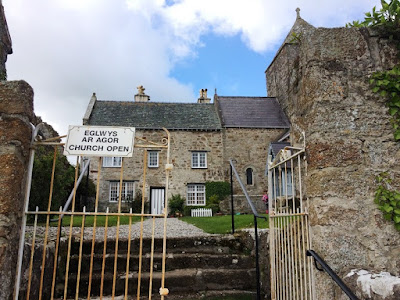 Before leaving Anglesey, I visited one of the earliest Christian sites in Wales at the eastern tip of the island. Penmon is 5 km east of Beaumaris, and its name in Welsh means the end of the island.

On the short journey, the landscape was evidence of the way Penmon limestone was extracted to build Birmingham Town Hall and in rebuilding Liverpool and Manchester after World War II. The stone was also used in building the Menai Suspension Bridge (1826) and the Britannia Bridge (1850). 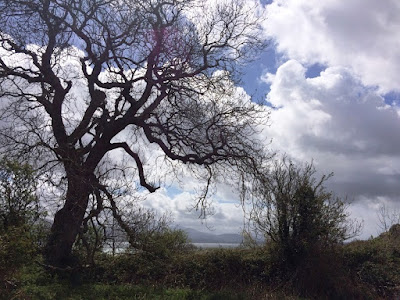 Looking out towards Snowdonia from the grounds of Penmon Priory (Photograph: Patrick Comerford, 2016) 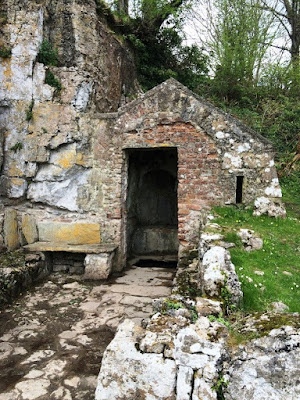 Saint Seiriol’s Well in Penmon may include parts of the oldest remaining Christian building in Wales (Photograph: Patrick Comerford, 2016)

By the 10th century, the monastery had a wooden church, and two high crosses probably stood at the entrance to the monastery. After Penmon was destroyed during Viking raids in 971, the church was rebuilt in stone, and Penmon survived the arrival of the Normans in the following century. The Priory Church was rebuilt in stone again in the 12th century, and the oldest parts of the church today date from 1140, making it the most complete building of its age in north-west Wales. 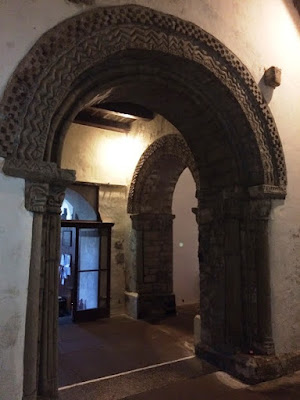 The Romanesque arches linking the crossing with the chancel and the south transept in Penmon Priory (Photograph: Patrick Comerford, 2016)

In the 13th century, Penmon became an Augustinian priory. But the priory was in decline before the Reformation, and by 1536 the community included only the Prior and two other members. The priory was dissolved in 1538, and Penmon was acquired by the Bulkeleys of Beaumaris, who used most of the land for a deer park and built a dovecot near the church.

The prior’s house, built in the 16th century, became a private house, but Saint Seiriol’s Church survived the Reformation. Much of the church was rebuilt in 1855, and the chancel now serves as the parish church. Inside the church, the crossing has richly carved pillars and Romanesque arches, and the decorative work suggests skills that may have come from Ireland. The south transept has a blind arcade of chevron-decorated Romanesque arches.

The larger High Cross in the nave in Penmon Priory has inter-lacing decorative patterns, a hunting scene and a scene of the temptations of Saint Anthony (Photograph: Patrick Comerford, 2016)

Two 10th century High Crosses inside the church once stood at the entrance to the mediaeval monastery. The larger cross has inter-lacing decorative patterns, a hunting scene and a scene of the temptations of Saint Anthony. The smaller cross is decorated with knot-work and animal heads. The baptismal font may have been the base of another, third High Cross. All three pieces show Irish influences. 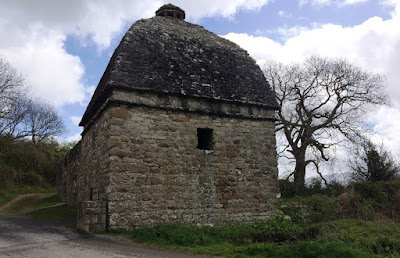 The dovecot at Penmon was built by Sir Richard Bulkeley of Beaumaris in 1600 (Photograph: Patrick Comerford, 2016)

Penmon Priory is now part of Beaumaris parish, and remains the finest and most complete example of a church of its period in Gwynedd. It worth going to the ends of Anglesey to see and to explore. 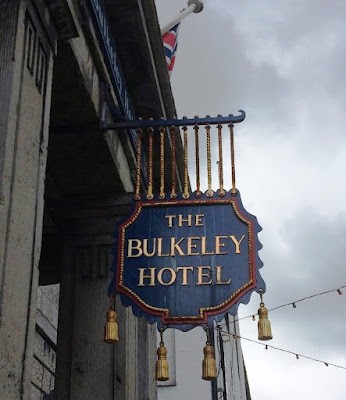 The Bulkeley family is remembered to this day in Beaumaris (Photograph: Patrick Comerford, 2016)

Canon Patrick Comerford lectures in the Church of Ireland Theological Institute. This feature was first published in August 2016 in the ‘Diocesan Magazine’ (Cashel, Ferns and Ossory).