Leaving the island and
returning to the city

From the island to the city … walking along the Shannon in Limerick shortly after returning from Crete (Photograph: Patrick Comerford, 2017; click on image for full-screen view)

I am back from the island and have been to the city.

I have returned from the island of Crete, and already I have spent some time working at Church meetings in Limerick.

But I was transported back to Greece immediately on Thursday afternoon when I visited the Hunt Museum for the first time and came face-to-face with a number of classical Greek objects in the collection, including an earthenware water jar from 4th century BC.

Earlier this week, I mused that spending time on a Greek island, enjoying the sun, the sea, the scenery and evening meals might be compared to the crew in the Odyssey who are enticed to linger on the island with the lotus eaters and to forget the purpose of their journey.

But sometimes, I find, times spent lingering on the island is also time for reflection and thinking about future problems ahead.

But sometimes there is a danger of becoming isolated on holidays like this, and beginning to think that problems and solutions can be arrived at without reference to their context in the city back home. How often in discussions and conversations in abstract and distant locations like this, do we often think we can solve all the problems of the world?

So often I allow myself the luxuries of standing on the high moral ground without considering the dilemmas of those who have to make immediate decisions on their feet, on the ground below.

Sometimes in discussions on island holidays or on retreats, or on away days, the temptation is not so much to end up lingering on like the Lotus Eaters, but to hold onto what I see as my own high principles in exile, like I am less like Philoctetes in the Greek classical play of the same name by Sophocles.

Philoctetes is also named in Homer’s Iliad (Book 2), which describes his exile on the island of Lemnos, his debilitating snake-bite, and his eventual recall by the Greeks.

The play Philoctetes by Sophocles is one of his seven surviving tragedies and was written by Sophocles during the Peloponnesian War. It won first prize when it was first performed at the City Dionysia in Athens in 409 BC.

Philoctetes is one of the many Greek suitors who competes for the hand of the beautiful Helen of Sparta and he is required to take part in the Trojan War to reclaim her for Menelaus. Philoctetes gains the favour of Heracles and is rewarded with his bow and poisoned arrows.

But Philoctetes is stranded on the island of Lemnos by the Greeks on their way to Troy because a wound on his foot festers and give a terrible smell. Sophocles says Philoctetes has been bitten on the foot by a snake on the island of Chryse (Χρύση) when he unwittingly trespasses into the shrine of the nymph who gives her name to the island.

The bite causes Philoctetes constant agony and emits a horrible smell. For 10 years he lives alone in forced exile on Lemnos, and becomes increasingly angry at the treatment he has received from Odysseus.

But when the Greeks find they need the bow and arrows of Heracles in the siege of Troy, Odysseus and a group of men rush back to Lemnos to recover them. The Greeks are surprised to find that Philoctetes is still alive, and they wonder what to do next. Odysseus tricks the weaponry from Philoctetes, but Diomedes refuses to take the weapons without the master archer, who is still angry with Odysseus.

The fate of the entire Greek expedition hangs in the balance. Heracles finally persuades Philoctetes to go to Troy, promising he will be cured and that the Greeks will win. Philoctetes obeys and back at the siege of Troy a son of the physician Asclepius heals his wound permanently.

Because Philoctetes is not suffering the war-weariness of the previous 10 years, he is among the Greeks chosen to hide inside the Trojan Horse, and during the sack of the city he wins glory, killing many Trojans, including Paris.

Sophocles does not offer a simple morality play, nor does he provide any easy answers to the perennial problems of why we suffer or why we feel abandoned by those closest to us.

Instead, he offers a way to discuss the conflicting values of the good of the nation and justice or the common good, between political expediency and integrity in the demand for justice. Should a dishonourable action be carried out for the sake of the common good? Both Philoctetes and Odysseus represent extremes of each set of competing values, and both become the subject of criticism by Sophocles.

This is not a play of action and doing, but a play about emotions and feelings, a study in suffering. Sophocles appears to suggest that deception is unjustifiable in a democratic society, no matter how high the stakes may be, and that common ground outside politics must be found if conflicts are to be resolved.

The earthenware water jar in the Hunt Museum may be contemporaneous with the play Philoctetes by Sophocles. When we return from our islands to our cities, how do we retain our values without neglecting the need to pursue the common good and without losing personal integrity? 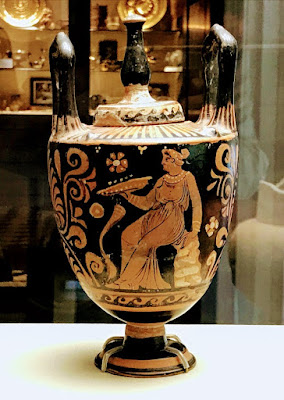