Finding a cross linked to
Pugin in the Hunt Museum 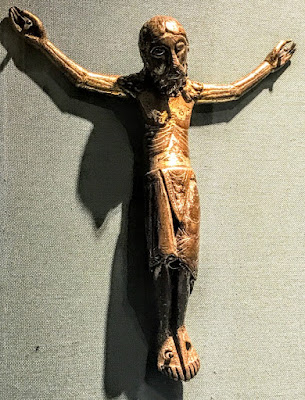 There is a large collection of crosses in the Hunt Museum in Limerick, including carved and wooden crosses, processional and rood crosses, reliquary and rosary crosses. There is a small array of Penal crosses and Rosary crosses, and a large selection of miscellaneous crosses collected throughout Europe.

These crosses are displayed throughout the museum on every floor and they range from a large French-made, polychrome Romanesque cross, made of wood in the 12th century as a rood cross to a gold, partly-enamelled reliquary cross that is also known as the Mary Queen of Scots Crucifix and that is anecdotally linked to Mary Queen of Scots (1542-1587).

I posted last month [15 July 2017] about the processional cross in the museum that is similar in almost every detail to the Bosworth Crucifix or Comerford Cross that was once owned by James Comerford (1807-1881), said to have been made for Richard III, and found in a field near the site the site of the Battle of Bosworth.

The Pugin Crucifix is a Romanesque figure that is said to have been once owned by the English architect AWN Pugin (1812-1852), whose passion for the Middle Ages helped to ensure the success of the Gothic Revival in architecture.

The Christ figure made for this crucifix has a head that is large in relation to the body, falling forward onto his breast. His moustache, beard and hair are finely engraved. The loin-cloth has a V-shape fold like an apron in the centre. The drapery is treated with some freedom, falling well below knee level at the back. The feet are parallel, the arms bend gently upwards, and the arms and legs ate engraved with fine lines to indicate the muscles and tendons.

This figure was once owned by Dr Leonard Mackey of Edgbaston, the senior physician to the Queen’s Hospital, Birmingham. In 1910, he married Pugin’s granddaughter, Florence Marion Pugin, eldest daughter of the Peter Paul Pugin (1851-1904), which may explain how he inherited the cross.

Leonard Mackey died in 1940, and at one stage the cross was on loan to the British Museum. But it is not clear from the exhibition details how the cross came to the Hunt Museum.

Apart from Pugin’s role in church architecture in Ireland, this crucifix has a special relevance for Ireland as a crucifix of this type served as a model for the head of the 12th century market cross in Tuam, Co Galway. 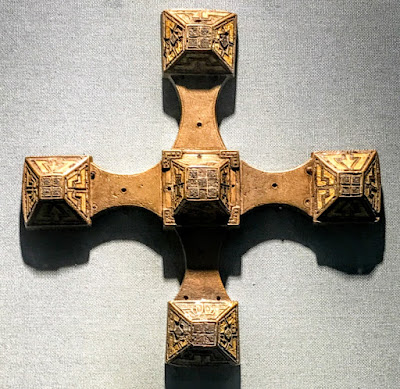 The Antrim Cross dates from ca 800 AD and was found in the River Bann in the 19th century (Photograph: Patrick Comerford, 2017)

The Antrim Cross is a bronze and enamel cross dating from ca 800 AD and was found in the River Bann in Co Antrim in the 19th century.

The cross was probably intended to decorate the wooden cover of a shrine or reliquary or was used as the central piece on a cross. It is decorated with enamel and millefiori – cut bundles of coloured glass rods – in geometric and animal designs.

The Antrim Cross is a bronze cross with five equal arms. The cross has five pyramidal bosses each in the form of a truncated pyramid. The side of the pyramids are decorated with interlocking angular fields of yellow enamel, alternating with a similar-coloured design of an arrow within a truncated triangle.

The pyramidal boss at the centre is taller and has angular enamelled panels on two of its four sides. The other two sides, back-to-back, differ in that they are decorated with an animal design, once fully enamelled between its raised outlines.

The flat tops of the bosses are decorated with small squares of millefiori enamel. Rivet-holes in the separately cast base-plate show that this cross was attached to a flat surface, perhaps that of a house-shaped reliquary. Part of a collection of miscellaneous crosses in the Hunt Museum, Limerick (Photograph: Patrick Comerford, 2017)