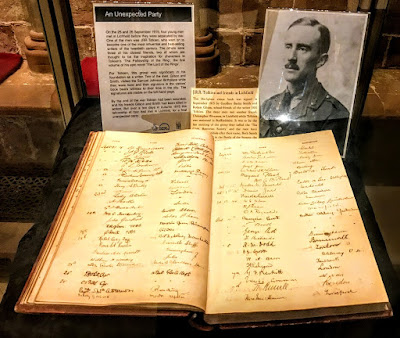 The story of JRR Tolkien and the ‘Council of Lichfield’ is told at the ‘Consequence of War’ exhibition in Lichfield Cathedral (Photograph: Patrick Comerford, 2018)

When Frodo, Sam, Merry and Pippin set off from the Shire together as a band of friends into ‘lands wholly strange to them’ to fight the forces of evil, they may not have known what truly lay ahead of them.

The Fellowship of the Ring is probably the best-known and most famous of JRR Tolkien’s books in The Lord of the Rings epics. But were the four friends inspired by a pre-war reunion organised by Tolkien and his friends in Lichfield before they set off for World War I?

This is one of the many questions posed in the literary themes that are part of the ‘Consequence of War’ exhibition in Lichfield Cathedral, marking the centenary of the end of World War in 1918.

Other literary aspects of the exhibition include the poetry of Wilfred Owen, who was born in the Diocese of Lichfield, and the works of Rupert Brooke.

The story of JRR Tolkien’s visit to Lichfield adds an interesting dimension to this part of the exhibition.

On 25 and 26 September 1915, four young men – John Ronald Reuel (JRR) Tolkien, and his friends Robert Quilter Gilson, Geoffrey Bache Smith and Christopher Luke Wiseman – met in Lichfield before they were separated by war.

For Tolkien, this group was significant in shaping his future as a writer. They met at school at King Edward’s School in Birmingham, then located on New Street. The group was known as ‘TCBS,’ an acronym for Tea Club, Barrovian Society, because they once met regularly at the Barrow Stores in Birmingham, a department store with a café on the corner of Bull Street and Corporation Street.

The four friends shared the ideal that they could change the world for the better through art and writing. When they met in Lichfield on 25 and 26 September 1915, Gilson and Smith visited the Samuel Johnson Birthplace, where their signatures in the visitors’ book remain as evidence of this gathering. Gilson and Smith appended the initials TCBS to their names, although they incorrectly give the date as 24 September.

Smith’s and Gilson’s signatures were found three years ago in 2015 by Joanne Wilson of the Samuel Johnson Birthplace Museum after an inquiry from Marty Smith of the Ridware History Society, who had heard about the ‘Council of Lichfield.’ The visitors’ book is part of the current exhibition in Lichfield Cathedral.

Tolkien was going through his military training nearby at Whittington Barracks, and Gilson, Smith and Wiseman travelled to Lichfield to meet in the George Hotel for what they called the ‘Council of Lichfield’ on 25 September.

This was the last meeting of these four intellectual and aspiring young friends before they were sent to the front. But they continued to stay in contact with each other and to correspond about their literary work until 1916.

Gilson was the first to be killed. On the first day of the Battle of the Somme, 1 July 1916, he was killed by a shell. Tolkien’s shock and grief infuses one of the first items in The Letters of JRR Tolkien: ‘His greatness is … a personal matter with us – of a kind to make us keep July 1st as a special day for all the years God may grant to any of us …’

Smith never returned from the Somme either. He joined the 19th Service Battalion of the Lancashire Fusiliers, the ‘3rd Salford Pals,’ and too part in the Battle of the Somme. He was hit by shrapnel on 29 November 1916, and died four days later, on 3 December. A collection of Smith’s poetry, A Spring Harvest, was published in 1918, with a preface by Tolkien.

Tolkien writes in his Foreword to the second edition of The Lord of the Rings: ‘One has personally to come under the shadow of war to feel fully its oppression; but as the years go by it seems now often forgotten that to be caught in youth by 1914 was no less hideous an experience than to be involved in 1939 and the following years. By 1918 all but one of my close friends were dead.’

Only Tolkien and Wiseman, a naval officer, had survived the war. Later, Tolkien named his son Christopher Tolkien after Wiseman.

In a panel nearby is the poem Anthem for Doomed Youth by Wilfred Owen:

What passing-bells for these who die as cattle?
— Only the monstrous anger of the guns.
Only the stuttering rifles' rapid rattle
Can patter out their hasty orisons.
No mockeries now for them; no prayers nor bells;
Nor any voice of mourning save the choirs,—
The shrill, demented choirs of wailing shells;
And bugles calling for them from sad shires.

What candles may be held to speed them all?
Not in the hands of boys, but in their eyes
Shall shine the holy glimmers of goodbyes.
The pallor of girls' brows shall be their pall;
Their flowers the tenderness of patient minds,
And each slow dusk a drawing-down of blinds.

There is no proof that these four young men inspired specific characters in Tolkien’s work, and Tolkien never confirmed that Middle Earth was analogous to the world he confronted at war. But there are reflections of their last meeting at the ‘Council of Lichfield’ in the George Hotel in that scene in The Fellowship of the Ring where Frodo, Sam, Merry and Pippin set off from the Shire together to fight the forces of evil, not knowing what lay ahead of them. 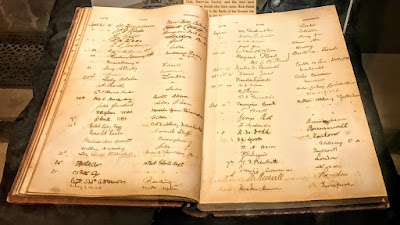 Signatures in the visitors’ book from the Samuel Johnson Birthplace Museum in the ‘Consequence of War’ exhibition in Lichfield Cathedral (Photograph: Patrick Comerford, 2018)