While they were talking about this,
Jesus himself stood among them
and said … ‘Peace be with you’ 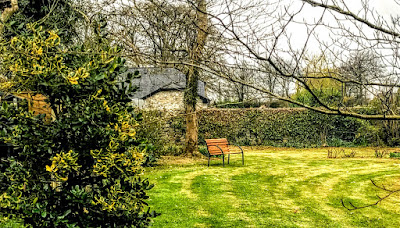 Well, I got back from Thessaloniki in the middle of the week to a much-colder Ireland, from warm sunshine that felt like early summer to cold climes and grey skies.

Because of the differences in the Greek calendar and the Western calendar, I have experienced a second Holy Week and a second Easter.

After a full programme in Ireland for Holy Week and Easter, I went through it all again last weekend, including Good Friday processions, the Easter Vigils and the joys of celebrating Easter.

Easter is so important in Greece, that our celebrations here pale into insignificance.

The common Easter greeting in Greece is Χριστός ἀνέστη! (Christós anésti!), Christ is Risen! And the automatic, reflex response, between friends and strangers alike, on the streets and in the shops, is Ἀληθῶς ἀνέστη! (Alithós anésti!), He is Risen Indeed!

And this is not just for Easter Day, or even a week or two after. Easter is celebrated for 50 days.

It is often forgotten here is that Easter is not just for Easter Day. The Risen Christ is not put back into the tomb, nor is the stone rolled back across it, after Easter Day or after the Easter holiday is over.

The Easter Season is a celebration of our new creation in the Risen Christ, and it is a full season of 50 days. It brings together the three dimensions of the Resurrection, the Ascension, and the sending of the Spirit..

These 50 days amount to one-seventh of the year, and they form our great ‘Sunday’ of the year. Just as Sunday is the first and the eighth day, so the ‘great Sunday’ of the 50 days of Easter begins with the day of the Resurrection and continues through eight Sundays, or an octave of Sundays, a ‘week of weeks.’

That is the way it is supposed to be in the Church here too, which is why our Gospel reading this morning continues the Easter, post-Resurrection stories.

I came back in time as well to enjoy the benefits of the work parties that have been turning over the Rectory Garden on three separate occasions in the past fortnight.

This work has been so wonderful, that when we had some real sunshine on Friday morning, I was able to spend time in the garden, reading, thinking, praying and putting the final touches to this morning’s services and sermons.

As I sat there working, with the sun streaming down on me at my laptop, the birdsong, the sunshine and the blooming daffodils brought to mind some lines that are so familiar that they often seem trite to us now:

The kiss of the sun for pardon,
The song of the birds for mirth,
One is nearer God’s heart in a garden
Than anywhere else on Earth.

This verse is on a plaque on a wall in Saint Mary’s Cathedral, Limerick, and must be inscribed on millions of garden plaques, bird baths and sundials. The lines were penned by the English poet and hymnwriter Dorothy Gurney (1858-1932).

She was the daughter and wife of Anglican priests, her grandfather and her brother were both Anglican bishops, and ‘God’s Garden’ is her best-known poem.

I never had a great interest in gardening – but I have an abundant appreciation of the generosity of people who tend to a garden like this, and to parishioners who turned the rectory garden around this week so that I could sit and work there that morning.

Our word paradise comes from an old Persian word meaning an enclosed or walled garden. In the first fourth century BC, Xenophon adapted the Persian phrase into Greek as παράδεισος (paradeisos). Xenophon provides an early description of a Persian garden in his Οἰκονομικός (Oeconomicos), in which Socrates recalls the visit of the Spartan general Lysander to the Persian prince Cyrus the Younger and his ‘paradise at Sardis.’

Lysander is ‘astonished at the beauty of the trees within, all planted at equal intervals, the long straight rows of waving branches, the perfect regularity, the rectangular symmetry of the whole, and the many sweet scents which hung about them as they paced the park.’ 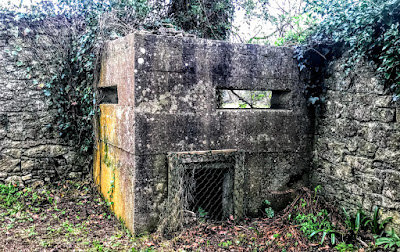 A war-time structure in the rectory garden … a reminder of war in surroundings of peace (Photograph: Patrick Comerford, 2018)

Xenophon is writing about household management and agriculture in one of the earliest-known works on economics. It is also a treatise on leading an army and a state. And in the rectory garden in Askeaton there is also a reminder of the affairs of state, armies and preparedness for war.

The way the growth has been cut back in the garden in the past week or two almost makes a feature of the old sentry box in a corner. It was built during World War II, an evident part of the planning for a possible invasion from Germany along the major air and sea route on the River Shannon.

It is curious that the ruins of this cramped little building were left standing when the Old Rectory was sold and the modern new rectory was built in the old walled garden.

As the possibility of another catastrophic conflagration in the Middle East unfolds, this crumbling relic of war in this peaceful setting is a reminder that even in times of peace we are never far from war.

As I worked peacefully in the garden in the rectory in this past week, I was conscious that the situation in Syria holds the potential of developing into another war, if not a global conflict.

Often, the rush to war abroad can be a symptom of ineffective leadership at home, Offering bravado abroad as an alternative to delivering on election promises at home.

The Prussian general Clausewitz famously declared: ‘War is the continuation of politics by other means.’ But, as Tony Benn told the House of Commons in 1991: ‘All war represents a failure of diplomacy.’

It was only in the Second Temple era Judaism that the Persian and Greek word paradise came to be associated with the Garden of Eden, and by extension its meaning was transferred to heaven.

In the New Testament, the word paradise is used only three times: by Christ on the cross, in response to the penitent thief, ‘Truly, I tell you, today you will be with me in Paradise’ (Luke 23: 42-43); by Saint Paul in his visionary description of being ‘caught up into Paradise’ (II Corinthians 12: 3-4), and in the Book of Revelation in a reference to ‘the tree of life that is in the paradise of God’ (Revelation 2: 7; see Genesis 2: 9).

The Persian, Greek, classical and Biblical images, which bring together the concepts of a garden, the enclosed place of peace, Eden, a restored earth, the coming kingdom and beatific visions of heaven are in sharp contrast to the Valhalla of Norse mythology, which is ruled over by Odin, the god of war, and is reward for those who die in conflict and combat.

The use of chemical weapons in any circumstances is a crime against humanity. But bombarding towns and cities in Syria is hardly going to bring solace, comfort or peace to the over-bombed and much-victimised people of Syria, certainly not going to bring them into paradise. Instead, there is a real danger of creating a Valhalla or even a hell on earth rather than bringing the people of Syria closer to a place of peace and comfort.

Quotations from Dorothy Gurney’s popular poem often miss the next and final verse which tells us why we are near to God in the garden:

For he broke it for us in a garden
Under the olive-trees
Where the angel of strength was the warden
And the soul of the world found ease.

Where is the soul of the world to find this peace with this weekend’s bombardments and talk of war?

O perfect Love, all human thoughts transcending,
lowly we kneel in prayer before thy throne,
that theirs may be the love which knows no ending
whom thou for evermore dost join in one …

On the great day of the Resurrection, Saint Luke portrays the Risen Christ granting the disciples that ‘joy which brightens earthly sorrow,’ that ‘peace which calms all earthly strife,’ that ‘vision of the glorious morrow that will reveal eternal love and life.’

He eats with us, he dispels fear, he proclaims peace, and on the Easter morn he commissions us to be his witnesses (Luke 24: 47-48). We are to do the same.

Today the scripture has been fulfilled in our hearing, every time we eat with him, proclaim his word and invite the world into the kingdom.

Today is the day of resurrection, of the in-breaking of God’s kingdom. 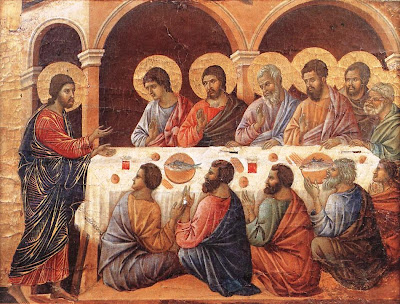 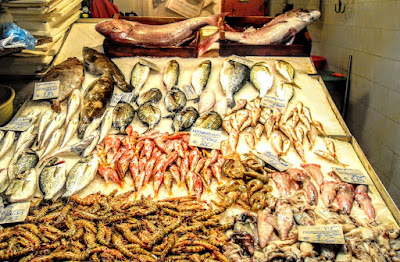 ‘They gave him a piece of broiled fish, and he took it and ate in their presence’ (Luke 24: 42-43) … fish on sale in a market in Thessaloniki (Photograph: Patrick Comerford)

This sermon was prepared for Sunday 15 April 2018. Scripture quotations are from the New Revised Standard Version Bible, copyright © 1989 by the Division of Christian Education of the National Council of Churches of Christ in the USA, and are used by permission. All rights reserved. 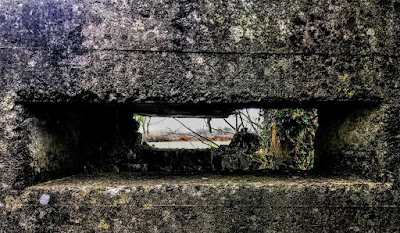 Seeing through the war-time structure to the joys of nature in the distance (Photograph: Patrick Comerford, 2018)