Lost in the colours
of Collioure in the
mid-May sunshine

The harbour and chateau at Collioure seen from the small island of Saint Vincent (Photograph: Patrick Comerford, 2018)

Collioure is half an hour south of Sainte-Marie-la-Mer, where I am staying this week, and another half an hour from Perpignan too, and another 30 minutes would bring us across the border at the Pyrénées and into Spain.

The town of Collioure (or Cotlliure in Catalan) is on the Côte Vermeille, and with its typical Mediterranean bay, Collioure attracted several Fauvist artists who made it their centre in the early 20th century.

André Derain, Georges Braque, Othon Friesz, Henri Matisse, Pablo Picasso, Charles Rennie Mackintosh, James Dickson Innes and Tsuguharu Fujita have all been inspired by the colours of Collioure, its royal castle, mediaeval streets, and the lighthouse converted into the church of Notre-Dame-des-Anges.

Ninety-eight reproductions of works by Matisse and Derain are exhibited around the port and harbour in the very same place where they painted the originals in the early 20th century. 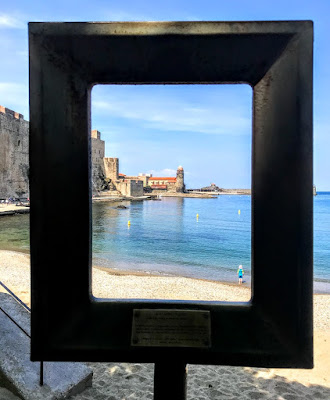 As the artist saw it … one of the many viewing points dotted along the seafront in Collioure (Photograph: Patrick Comerford, 2018)

The Spanish poet Antonio Machado, who fled to Collioure at the end of the Spanish Civil War in 1939, is buried in the cemetery. The British novelist Patrick O’Brian lived in Collioure from 1949 until he died in 2000. His novel The Catalans graphically describes life in Collioure before major modern changes, and he also wrote a biography of Picasso.

At one time, Collioure was separated into two villages by the river Douy: the old town to the south named Port d’Avall or Le Faubourg, and the up-river port, known as Port d’Amunt, or La Ville. 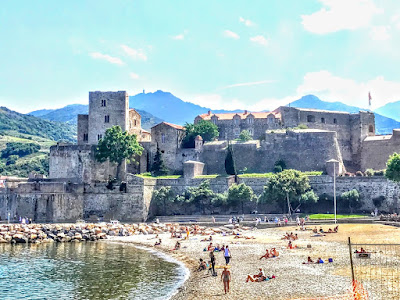 The Château Royal de Collioure dominates the centre of the harbour in Collioure (Photograph: Patrick Comerford, 2018)

The Château Royal de Collioure (or Castell Reial de Cotlliure) is a massive castle that dominates the centre of the harbour.

The castle at Castrum Caucoliberi is known from as early as 673, indicating a town here had strategic and commercial importance, when the Visigoth leader, Kingg Wamba, laid siege to the castle to subdue a rebellion.

Girard II, the last independent Count of the Roussillon, bequeathed his land to Alfonso II, King of Aragon and Count of Barcelona, in the 12th century.

The Kings of Aragon, anxious to promote the prosperity of Collioure, granted the place privileges and tax exemptions. The Knights Templar built the castle around 1207 and integrated it to the royal castle in 1345.

A second castle was later built by the Kings of Majorca in the 13th and 14th centuries. In the 13th century, the castle was annexed to the Kingdom of Majorca, which included the domain of Montpellier, the counties of the Roussillon and Cerdanya, the Conflent and Vallespir, and the Balearic Islands. The Kings of Majorca travelled with their court, moving often from Maguelonne, near Montpellier, to Perpignan, to Palma de Majorca or to Collioure.

In the 16th century, after a brief occupation by Louis XI, the Spanish Habsburgs again occupied Collioure. Charles V and his son Philip II turned the castle into a modern, 16th century fortress and reinforced the castle defences and its surroundings.

During the wars between the Spanish Habsburgs and the French Bourbons in the 17th century, Louis XIII’s troops laid siege to Collioure and the Château Royal in 1642.

A French force of 10,000, including Turenne, d’Artagnan and the King’s musketeers, occupied the hills overlooking the town, while the French fleet blocked the port, the Spanish were forced to surrender, and Collioure was captured by the French under Maréchal de la Meilleraye.

A decade later, the town and the castle were ceded officially to France under the Treaty of the Pyrenees in 1659.

Because of the town’s strategic importance, the Château Royal de Collioure and the Fort Saint-Elme were strengthened by Louis XIV’s military engineer, Sébastien Le Prestre de Vauban (1633-1707), who also built new fortifications at the Palace of the Kings of Majorca in Perpignan.

Collioure was besieged and captured by Spanish troops under General Dugommier in 1793-1794 in the last attempt by Spain to retake the city.

The castle had lost all strategic importance by the beginning of the 20th century, and was offered for sale at auction. It was turned into a men’s prison in 1939 and became the first camp in France holding refugees from the Spanish Civil War. 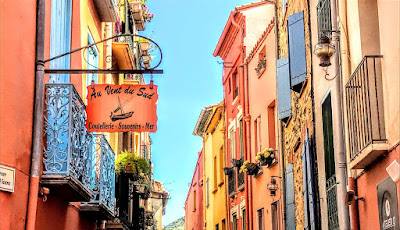 Strolling through the colourful streets of Collioure (Photograph: Patrick Comerford, 2018)

The castle now belongs to the local government and is one of the major tourist attractions in this region.

Collioure is overcrowded by tourists in the summer. But it was relaxed yesterday afternoon as three us strolled through the colourful narrow streets of Moré, the old fishermen’s neighbourhood by the harbour.

The beach is rocky but has some sand, and after visiting the Church of Notre-Dame-des-Anges with its converted lighthouse, we walked across to the small island of Saint Vincent, with its small chapel and views back across the harbour to the castle and Collioure. According to legend, this is where Saint Vincent was martyred in 303. The chapel was built in 1701 for the arrival of new relics of the saint.

Before we left, we lingered for a little while over wine and coffee by the harbour, enjoying the mid-May sunshine and the pastel colours of Collioure. 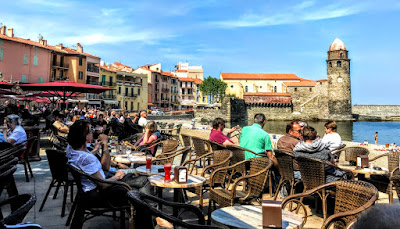 Lingering in the mid-May sunshine by the harbour in Collioure (Photograph: Patrick Comerford, 2018)

I have fond memories of a childhood holiday spent partly in Collioure in the weeks after Easter - the heat of the day, the brilliance of the sunshine, but oh how unexpectedly cold the Mediterranean was!