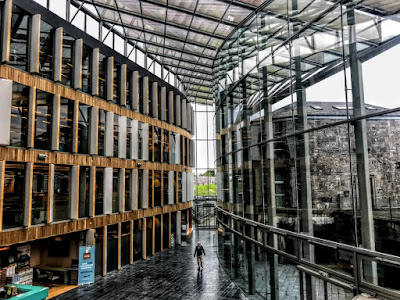 The atrium in the County Buildings and County Library in Mullingar, Co Westmeath (Photograph: Patrick Comerford, 2018)

I was discussing Mullingar Courthouse, the old County Hall and the former Market House yesterday [24 August 2018] as examples of traditional architecture than enhance the elegance of the county town of Westmeath.

During my visit to Mullingar earlier last week, I also visited one of the most interesting examples of modern architecture in provincial Ireland, designed to create a comfortable working environment yet integrated into the surrounding environment.

Westmeath County Buildings, beside the old County Hall on Mount Street, Mullingar, is the headquarters of Westmeath County Council and incorporates the County Library. This open and transparent building is a low energy civic office building at the heart of an important archaeological site in the county town.

The building is carefully woven into its historic archaeological context, creating an ensemble of new and old buildings, and together they bring new meaning and civic values to this old site.

The county buildings and library in Mullingar were designed by the architects Bucholz McEvoy, who also designed Limerick County Hall in Limerick, Meath County Council Headquarters in Navan, and Fingal County Hall in Swords, the Environmental Institute at University College Cork, the Samuel Beckett Civic Campus in Ballyogan, the welcoming pavilion at Government Buildings, and the entrance pavilion at Leinster House. The building, completed in 2009, included 7,500 square metres of new build and 1,550 square metres of refurbishment.

The building is designed to provide a vessel for the transparency attributed to local government, a civic building accessible by all, while providing both a comfortable work place and a pleasant experience for visitors. 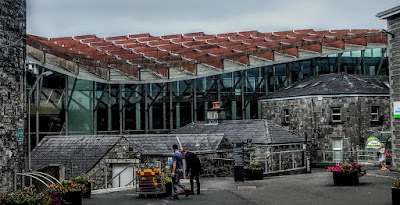 Outside, the building is an expression of open and transparent local government (Photograph: Patrick Comerford, 2018)

Outside, this building is an expression of open and transparent local government. Inside, as we entered the building through the main public atrium, we found ourselves in a sculpture of light, created primarily with glass, timber, and concrete.

The building form is organised principally along two axes and in two buildings. One north-south axis contains the library and café and establishes the principal relationship with the original County Building on Mount Street. The other, east-west axis is a curved office block.

The main atrium of the building is conceived of as a light-filled glass and timber hall, where the presence of the existing County Building and the historical remains are linked. Movement across the site, through the building, and to the public park takes place through this space, constantly reinforcing the connection to the County Building.

On the first floor, link bridges connect the existing County Buildings to the reception and meeting room at the intersection of the bridge and the office block.

The library is reached through the main public space, with its double-height reading room facing out onto a public park. The curved office spine looks to the south, facing a new public park over the excavated ground.

This entirely naturally ventilated building maximises passive design principles and creates an environment that is in balance with nature. The design of a structure in its construction and operation consumes less of the environment’s natural non-renewable resources.

A double façade combined with an atrium lung serve to effect all of the ventilation in the office building. The double façade acts as a ventilation chimney driven entirely through wind pressure, while acting as an acoustic barrier.

The double facade also ensures fresh air supply throughout the year, without opening a window out to the noisy train tracks. The atrium, the main public space, is also the ventilation lung of the building, providing supply air to the offices.

Westmeath County Buildings and Library has been an award-winning project for Bucholz McEvoy, including the 2010 Chicago Atheneum Green Good Design Award, the 2010 Chicago Atheneum International Architecture Award, the 2009 Opus Architecture and Construction Award, and a commendation in the 2010 RIAI Awards, it was shortlisted for the 2010 Prime Property Award and the 2009 Public Building of the Year Emirates Glass LEAF Awards, and it was a finalist in the 2010 Green Award. 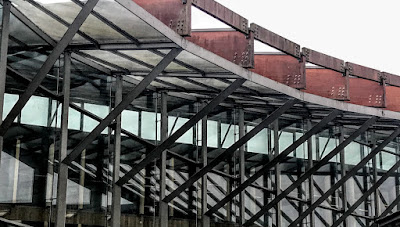 Westmeath County Buildings and Library has been an award-winning project for Bucholz McEvoy (Photograph: Patrick Comerford, 2018)