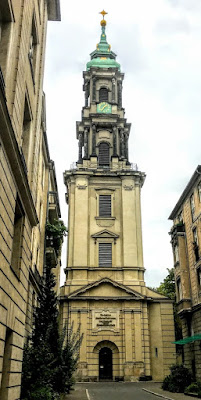 A picturesque gate and a narrow passageway lead up to Sophienkirche, the only surviving baroque church in Berlin (Patrick Comerford, 2018)

In my sermons in Askeaton and Tarbert yesterday [16 September 2018], I related the theme of Wisdom (Σοφία, Sophia) in the lectionary readings with the name of Sophienkirche, the church off Große Hamburgerstraße, close to where I was staying in Berlin last week.

Sophienkirche is also close to the old Jewish cemetery in Berlin, Sophienkirche is the first parish church built in the newly-developed Spandauer Vorstadt area in the early 18th century, the original centre of Berlin’s Jewish cultural and commercial life.

It was at this church on Friday that I heard the story of Father Bernhard Lichtenberg (1875-1943), who died on his way to Dachau, a victim of the Nazis because of his life-long commitment to helping and aided persecuted Jews in Germany in the 1930s and 1940s.

A picturesque gate and a narrow passageway lead up to Sophienkirche, the only surviving baroque church in Berlin. It and was designed by the Prussian court architect Philipp Gerlach (1679-1748). He designed three squares in Berlin, including Paris Platz, by the Brandenburg Gate at the end of Unter den Linden, but Sophienkirche is one his few surviving churches.

The foundation stone of the church was laid in 1712 by Frederick I of Prussia (1657-1713), who intended the church should be named Saint Sophia’s Church in honour of his third wife, Sophie Louise von Mecklenburg-Schwerin (1685-1735).

However, Fredrick I died on 25 February 1713, and his wishes were not carried out when the church was consecrated at a ceremony presided over by Frederick’s son and successor, Frederick William I of Prussia (1688-1740). Instead, four months later, on 18 June 1713, the church was dedicated as the Spandauische Kirche.

So, why did Frederick William I not carry out his father’s wishes and see that the church was dedicated to Saint Sophia in honour of his step-mother, Sophie Louise?

Frederick I was married three times, and his widow, Sophie Louise von Mecklenburg-Schwerin, was his third wife. She was a pious Lutheran and was almost 30 years younger than her husband. He had only one son, Frederick William, and he married her in an arranged marriage in 1708, when he was twice her age – she was 23 and he was 51 – to ensure the Hohenzollern dynastic succession. However, Sophie, had no children.

Her Lutheran confessor, the young hymnwriter Johann Porst (1688-1728), introduced her to the Pietist August Hermann Francke (1663-1727). Under his guidance, the queen grew more serious and stricter in her manner, spending her time increasingly in a routine of prayers and sermons. It was said her court was like a convent, and she tried to convert Frederick from Calvinism to Lutheranism.

In one heated theological discussion, she stated that no-one in the Reformed (Calvinist) tradition could hope for salvation. The king asked her: ‘Then after my death you could not speak of me as the King of blessed memory?’ She answered: ‘I would say, “the dear departed King”.’

The king responded by admonishing Porst and exiling Francke. From then on, he seldom visited her in her apartments, she withdrew from court life and lived in retirement in her rooms. There she became obsessed with religion, and fell into states of depression and derangement. She periodically lost her ability to control herself and her courtiers tried to conceal her violent fits from the king.

During the last long illness of the king, which eventually led to his death, one particular incident awakened the king to the queen’s mental state. One night, dressed only in her white nightclothes and with loose hair, she rushed through the gallery that connected her apartments with those of the king, burst through the glass door into his room and, covered in blood from the wounds caused by the broken glass door, she attacked the king and screamed abuses at him.

The king was in a fever and awoke suddenly. In his confusion, he imagined she was the legendary ‘White Lady’ who would foretell his death. His screams brought his attendants to his bedside, and Sophia Louise was removed, unaware of what she had done.

In January 1713, just a few weeks before his death, Frederick sent her back to her family in Mecklenburg-Schwerin. Sophia Louise was said to be ‘helpless, mindless, and melancholy.’ From then on, she lived with her widowed mother at Grabow castle.

When Frederick William presided at the consecration of the new church on 18 June 1713, it is understandable that he did not want to carry out his father’s wishes when it came to naming the church, perhaps blaming his stepmother Sophia Louise for hastening his father’s death.

Johann Friedrich Grael (1707-1740) added the baroque tower to the church in 1732-1734, and when Sophia Louise died in 1735, she was buried not in the Hohenzollern crypt in the Berliner Dom but in the Schelfkirche Saint Nikolai in Schwerin.

Frederick William I died in 1740, and eventually his son, Frederick II (1712-1786), remembered today as Frederick the Great, decided to revive his grandfather’s original wishes, and had the church renamed in honour of Sophie Louise. Ever since, the church has been known as the Sophienkirche.

The church was rebuilt to designs by the architect Friedrich Schulze (1843-1912) in 1891-1892, when it was given a much-needed facelift. The roof was raised, the chancel was added at the east end, altars were added, and many other changes were introduced, enhancing the aesthetic integrity of the church. The surviving interior decoration is almost entirely from this restoration.

Two 18th-century German poets are commemorated on the walls of the church. There is a memorial to the poet Karl Wilhelm Ramler (1725-1798) on the outside wall of the church sacristy and another on the outside north wall to the poet Anna Louisa Karsch (1722-1791), known to her contemporaries as ‘Die Karschin’ and ‘the German Sappho,’ and the first German woman to live from the proceeds of her own literary works.

In the cemetery beside the church, Friedhof II der Sophiengemeinde, the notable burials include the composer Carl Friedrich Zelter (1758-1832), founder of the Sing-Akademie zu Berlin. Here too are graves from the last days of World War II, when street battles were fought nearby in Sophienstraße.

At the height of the Cold War, when the Revd Dr Martin Luther King visited Berlin in 1964 at the invitation of Willy Brandt, he decided to make an unscheduled visit to East Berlin, crossing at ‘Checkpoint Charlie’ and visiting the Humboldt University, the Marienkirche and the Sophienkirche on 13 September 1964.

Although his visit to the Sophienkirche was hastily arranged, there was standing room only when he stood up to preach on the great social revolution taking place in the US. Referring briefly to the ‘symbol of the divisions of men on the face of the earth,’ King said, ‘Here on either side of the wall are God’s children, and no man-made barrier can obliterate that fact.’

It is worth telling that Martin Luther King was born Michael King. His father had visited Germany in 1934 to attend the Fifth Baptist World Alliance Congress. Despite the Nazis, he was so impressed by Germany and by Martin Luther that he eventually changed his own name and his son’s name to Martin Luther King, although his son’s birth certificate was not legally amended until 1957 – seven years before he visited the Sophienkirche; he would receive the Nobel Peace Prize a month after that visit to East Berlin.

Sophienkirche, where Martin Luther King spoke in 1964 about the divisions created by the Berlin Wall (Photograph: Patrick Comerford, 2018)