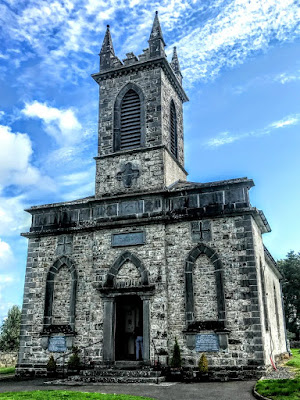 The former Saint Patrick’s Cathedral, Ardagh, Co Longford … Bishop Charles Warburton was Dean of Ardagh before moving to Limerick; his son was Precentor of Limerick for 60 years (Photograph: Patrick Comerford, 2020)

When a project looking at my predecessors as Precentors of Limerick was postponed last month due to the pandemic limits on public events, I thought it might still be interesting to look at past precentors in a number of blog postings.

They were related to Canon John Warburton who was, perhaps, the longest-ever holder of the office, being Precentor of Limerick for 60 years from 1818 until he died to 1878. He was still in his 20s when he was appointed precentor, and had already been Precentor of Ardfert, a sinecure in a cathedral that had not functioned as such since the mid-17th century.

But Warburton was a typical Victorian pluralist found so often in the pre-disestablishment, and like his brother and son-in-law probably owed his preferment to the fact that his father was Bishop of Limerick, albeit a bishop with an unusual and colourful background.

John Warburton was a younger son of Charles Mongan-Warburton (1754-1826), Bishop of Limerick and later Bishop of Cloyne, who was born Terence Mongan ca 1754, the third son of Dominic Mongan or Mangon, a blind harpist from Co Tyrone.

Early in life, the future bishop trained to be a Roman Catholic priest in France, and later claimed to hold the degrees of MA and DD. There is no record of his ordination as deacon or priest in France or Ireland, but he later became an Anglican and was accepted then as an ordained priest. At the same time, he changed his given name to Charles, and became a chaplain with the 62nd Regiment of Foot. He left Monkstown in April 1776 as a deputy chaplain with his regiment, which was sent to fight in the American War of Independence.

I can find no record of the name of his first wife, or whether they had any children. In America, he was captured during the fall of Saratoga in October 1777. After his release, he married his second wife, Frances Marston, daughter of Nathaniel Marston and his wife Anna Van Cortland, in New York on 18 February 1779.

He became a chaplain with the 3rd Battalion, New Jersey Loyalists in 1781. He then lived in New York for a time, before returning to Ireland ca 1785, with his second wife and at least three young children.

He changed his name by royal warrant in 1792, from the ‘Rev Charles Morgan’ (sic; corrected later to Mongan), adopting the surname of Warburton, a name held by ‘his maternal cousin-german Miss Alicia Warburton, Spinster, sister of the late William Warburton, of the City of London, Esq, deceased.’

He became Bishop of Limerick and Ardfert in 1806, and was consecrated bishop in Saint Patrick’s Cathedral, Dublin, on 13 July 1806. He later became Bishop of Cloyne on 20 September 1820. Bishop Charles Warburton died in Cloyne, Co Cork, on 9 August 1826, aged 72, and was buried in the family vault in the cathedral.

Charles and Frances were the parents of at least six children, including two sons who followed their father into ordained ministry, and a daughter who married an archdeacon. 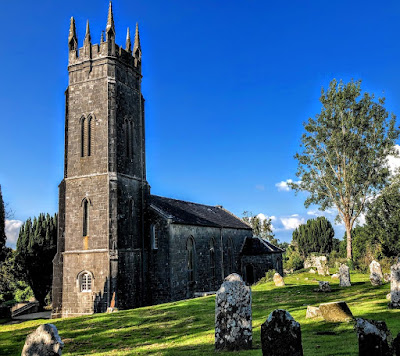 The younger Charles Warburton married Alicia Bunbury-Isaac, and most their children were born in Rathkeale. He died at the Glebe House, Rathkeale, on 12 December 1855, aged 75, and was buried in his family vault at Holy Trinity Church, Rathkeale.

The inscription on the Warburton vault in Rathkeale, reads: ‘Within this vault are interred the mortal remains of the Venerable Charles Warburton LLD Archdeacon of Tuam and Chancellor of Limerick. He died on the 12th day of December 1855 aged 75 having borne a long and suffering illness with exemplary patience and resignation to the Divine Will.’

They were the parents of six sons and four daughters. Their two eldest sons were born in Dublin (1823) and Cambridge (1824), which shows how John Warburton was not too attentive to being resident in any of his numerous parishes.

The tower of Saint Anna’s Church, Millstreet … for almost 60 years the Rectors of Drishane were all members of Bishop Warburton’s family (Photograph: Patrick Comerford)

They were also first cousins of John Charles Mongan (1798-1860), who for 40 years was Rector of Drishane (Millstreet), Co Cork, in 1820-1860. He was ordained deacon by his uncle, Bishop Charles Warburton, in Tralee in 1819 when he was still below the canonical age. He married Elizabeth Wallis of Drishane Castle and their daughter Marianne Charlotte married the Revd Francis Young, curate of Drishane.

But John Charles Mongan too spent little time in his parish: for many years he was ‘a chaplain abroad’ and the Rector of Saint Mary’s, Belize, Honduras, where he died on 24 August 1860. 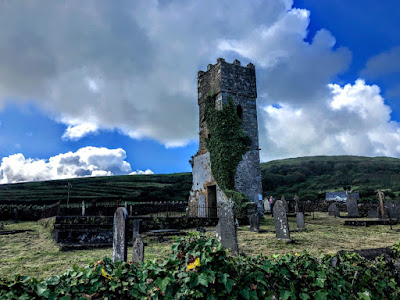 The ruins of Saint John’s Church, Kilmore, Valentia … who was the John Warburton who was Rector of Valentia (Photograph: Patrick Comerford, 2020)

Canon John Warburton was Precentor of Ardfert in 1811-1814, and Leslie those who followed him have identified him with the Revd John Warburton, who was the Rector of Kilmore, or Valentia Island (1812-1830).

This John Warburton was educated at TCD (BA 1781), and he was his father’s curate in Banagher before becoming Rector of Kilmore or Valentia Island, Co Kerry, in 1811. Four years later, Saint John’s Church at Kilmore, outside the present Knightstown in Valentia, was built in 1815.

The archives of the Chief Secretary’s Office, now in the National Archives in Dublin, include letters from the Revd John Warburton, Co Kerry, requesting government relief from his debts.

The first letter, dated 19 October 1823, was sent from Valentia Island to Henry Goulburn, Chief Secretary, Dublin Castle, concerning the difficulties in obtaining his tithes, and pointing out that ‘the parish in its present situation will not support me.’

Warburton emphasises his financial distress, refers to his former work as curate to his late father Banagher, and recalls the assistance he gave his father in the management of the free school at Banagher. He details the debt he incurred through the loss of his tithes during the 1798 rebellion, and his subsequent difficulties with creditors, and requests government relief.

The second letter was sent by Warburton from the jail in Tralee, Co Kerry, to Goulburn on 10 December 1823. He refers to his arrest for debt, and renews his application for government relief. He notes that his family ‘must beg & I starve.’

This John Warburton died at Valentia on 7 November 1829 at the age of 72 while he was the Rector of Valentia. A report at the time described him as the Rector of Valentia, Co Kerry, ‘and Precentor of Limerick... a relative of the late Bishop of Clogher... and was collated to his benefices by Dr Warburton when Bishop of Limerick.’ However, not all these details appear to be accurate, and there is much conflation with the other John Warburton, who was then Precentor of Limerick.

The Valentia parish register records his burial on 10 November. However, another source records says he was buried at Dromod, Co Kerry, also on 10 November 1829, and aged 72 years. Dromod is the name for the Church of Ireland parish in Waterville. A new parish church was built there in 1866, and has since been dedicated to Saint Michael and All Angels.

This John Warburton’s widow Anne later emigrated to New South Wales, probably in 1840, and she died at her son’s residence at Pyrmont, near Sydney, on 29 March 1842. 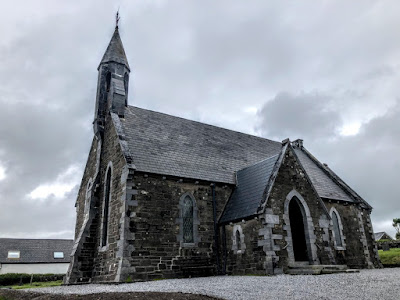 A new parish church was built in Dromod, Waterville in 1866 (Photograph: Patrick Comerford, 2020)