Who are the Christians caught in the conflict
between Israelis and Palestians? 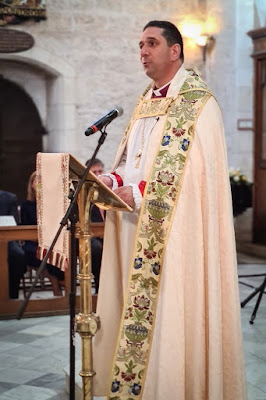 There is an apocryphal story about Liam Cosgrave’s address to the United Nations as the Irish Minister for External Affairs in 1956. Ireland had just joined the UN, and Cosgrave was speaking in the wake of the Suez crisis and a war between Egypt and Israel. The story says the future Taoiseach embarrassed himself and his country by calling on the Muslims and Jews in the Middle East to settle their differences like Christians.

His speech was drafted by Conor Cruise O’Brien, and Cosgrave suggested to Frederick Boland, the Irish ambassador, that the speech should include: ‘I appeal to the Jews and the Muslims to settle their differences in accordance with Christian principles.’

O’Brien pointed out that this was likely to impress neither Jews nor Muslims, and Boland told Cosgrave it would not ‘go down all that well in the Middle East.’

Cosgrave smiled enigmatically, and Boland turned to O’Brien and said: ‘It may not go down well in the Middle East, but the minister seems to think it will go down well in Dún Laoghaire Rathdown.’

The words in question were not included in the actual speech, but the story has become one of the most enduring anecdotes in Irish journalism and political history. It points too to the way Christians are often marginalised by or seen as irrelevant to accounts of conflict in the Middle East.

The recent conflict between Israelis and Palestinians has been caricatured – by journalists and protesters – as a conflict between Jews and Muslims. In all the reports and narratives, the plight of Christians in the region was ignored and forgotten.

As the latest conflict raged, few news outlets reported the installation and enthronement of Archbishop Hosam Elias Zakaria Naoum as the 15th Bishop of the Anglican Diocese of Jerusalem. The new bishop, who also carries the title of archbishop, was installed in Saint George’s Cathedral, Jerusalem, on Ascension Day (13 May).

Although Anglican clergy and laity from Israel and the West Bank were present, none from Jordan, Lebanon or Syria could attend. Scenes of serious disorder close to the cathedral, as well as in the mixed towns and cities inside Israel’s pre-1967 borders, were cause for great concern, while all-out confrontation in and near Gaza was causing many deaths and injuries.

The large congregation included Muslims and Jews, and Archbishop Hosam preached in both Arabic and English. He is a former dean of Saint George’s Cathedral, and a former coadjutor bishop of Jerusalem. The ecumenical guests included the Greek Orthodox Patriarch of Jerusalem, Theophilos III, the Latin Patriarch, Pierbattista Pizzaballa, the Lutheran bishop and clergy from other Christian traditions.

Archbishop Naoum soon issued an urgent appeal for financial support for Al-Ahli Hospital in Gaza City. He said the diocese was continuing its ‘Christian mission of bringing healing to the wounded, relief to those who have lost their homes and livelihoods, and comfort to those who mourn the loss of loved ones.’ 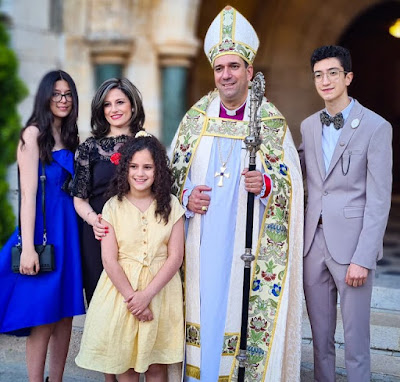 Archbishop Hosam Elias Zakaria Naoum with his family after his consecration in Saint George’s Cathedral, Jerusalem

Palestinian Christians belong to a diversity of churches or denominations, including the Eastern Orthodox, Oriental Orthodox, Western and Eastern Catholic, Anglican and Lutheran churches. They are estimated to account for 20% of the 13 million Palestinians, but 70% live outside Palestine and Israel.

Estimates suggest there about 50,000 Palestinian Christians in the West Bank. There are four groupings of Christians in Israel: migrant Christians without permanent status (150,000), Palestinian Arabs who are citizens of Israel (120,000), Hebrew-speaking Christians who are sociologically part of Jewish society (40,000), and expatriate Christians working in the Church (1,000). Only 1,300 Christians are left in the Gaza Strip, and their numbers are declining rapidly on a weekly if not daily basis.

Around 50% of Palestinian Christians belong to the Greek Orthodox Church of Jerusalem, led by Theophilos III. The Latin Patriarch, Patriarch Pierbattista Pizzaballa, is an Italian-born Franciscan. But there is a variety of churches in communion with Rome, including the Latin Rite, the Melkite Church (which has many similarities with the Greek Orthodox Church), the Maronite Church, and a branch of the Chaldean Church.

In recent years, Christians in Palestine and Israel have felt forgotten by outside Christians, and often see Christian tourists and pilgrims as interested in Biblical sites but not in the ‘Living Stones’ who are the Christians in the region today.

During the latest conflicts, the patriarchs and heads of the Churches in Jerusalem joined in expressing deep concern over growing Israeli-Palestinian violence. They said: ‘The special character of Jerusalem, the Holy City … compels all parties to preserve the already sensitive situation in the Holy City of Jerusalem. The growing tension, backed mainly by right-wing radical groups, endangers the already fragile reality in and around Jerusalem.’ 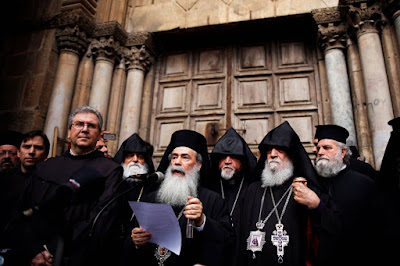 This full-page feature is published in the July/August 2021 edition of ‘Newslink,’ the Diocesan Magazine of the United Dioceses of Limerick, Killaloe and Clonfert (p 4)