Saint Brendan’s Cathedral,
Loughrea, is the jewel in
the crown of the Celtic Revival 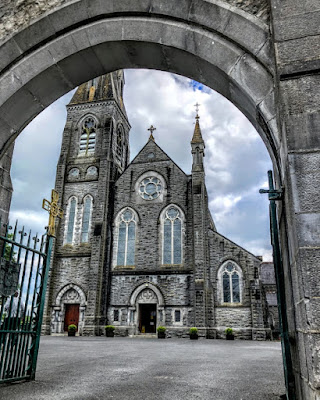 Saint Brendan’s Cathedral, Loughrea, Co Galway … the cathedral of the Diocese of Clonfert, and the jewel in the crown of the Celtic Revival (Photograph: Patrick Comerford, 2021)

Loughrea, Co Galway, is the cathedral town of Clonfert, the smallest Roman Catholic diocese in Ireland. The town takes its name from the Irish Baile Locha Riach, the town of the Grey Lake.

Lough Rea is a lake fed by springs and a stream and has one of Ireland’s few inland freshwater Blue Flag beaches. Some people say that the old town of Loughrea can be seen under the lake on a fine day.

There is a number of human-made island dwellings, or crannógs, on Lough Rea. Four of these islands were excavated in the 19th century and human-made structures, artefacts and animal remains were found. 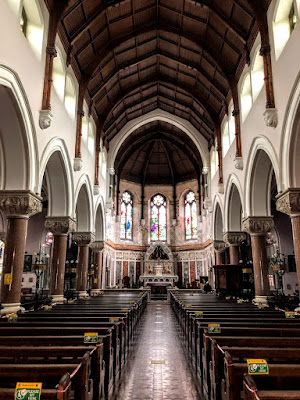 Saint Brendan’s Cathedral lies on the north-east shore of this beautiful lake, and faces onto Barrack Street, with a mediaeval gate tower forming the north-east corner of the site. This cathedral is worth visiting by anyone with an interest in architecture, the arts and crafts movement, and stained glass.

Saint Brendan’s Cathedral may be small in size but is magnificent in its interior. With its modern stained glass and interior decoration, it has been described as the jewel in the crown of the Celtic Revival.

Indeed, this cathedral is one of Ireland’s great contributions to European art of the 20th century. 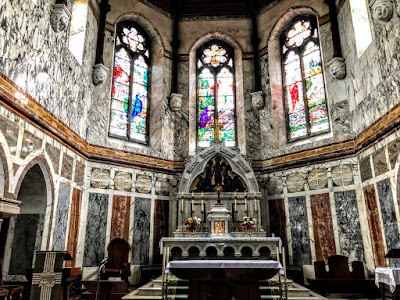 Saint Brendan’s Cathedral was designed for Bishop John Healy of Clonfert in the neo-gothic style by the architect William Henry Byrne (1844-1917) in 1897. The foundation stone was laid on 10 October 1897 and the cathedral was completed five years later in 1902.

William Byrne had been a pupil of JJ McCarthy, the architect who claimed the mantle of AWN Pugin in Ireland, and practised from 52 Dame Street, Dublin. He is particularly associated with Catholic church architecture and was architect to the Catholic dioceses of Killala, Ossory, Tuam, and Achonry and to the Sisters of Charity.

He was also architect to the South City Markets Co Dublin, responsible for rebuilding the markets after the fire of 1893, and to Pim Brothers’ drapery shop on the opposite side of South Great George’s Street. 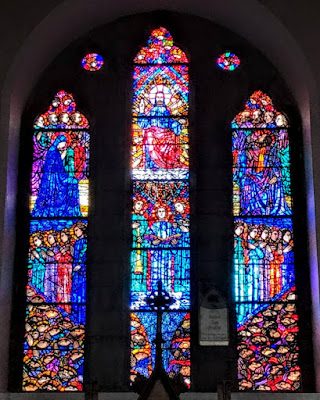 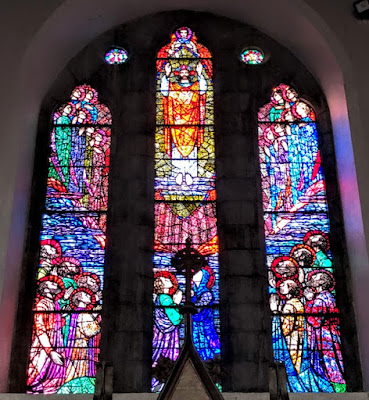 The Last Judgment (above) and the Ascnesion (below), two of the ten windows by Michael Healy (Photograph: Patrick Comerford, 2021)

Byrne’s design of Saint Brendan’s Cathedral, with its dramatic Gothic Revival style, is both a visual and social focus for the town, and the structure itself is of significant architectural and artistic merit. This was the first building in Ireland to be comprehensively decorated by the budding Irish Arts and Crafts Movement.

The Arts and Crafts Movement of the late 19th century sought to reunite the artist and the craftsman. It was born out of a reaction to the mass production of the industrial era and the soulless methods of industrial production that emphasised repetitive tasks and removed the link between the worker and the final product. This movement found fertile ground in Ireland during the Celtic Revival period from ca 1880 to 1930.

Saint Brendan’s Cathedral holds the most extensive collection of arts and crafts and Celtic Revival artefacts of any single building in Ireland. Most of the interior features date from the first decade on the 20th century, with the exception of the stained glass windows which continued to be commissioned until the 1950s.

Most notably, the cathedral has an extensive collection of stained-glass windows by the Dublin-based studio of An Túr Gloine studio. 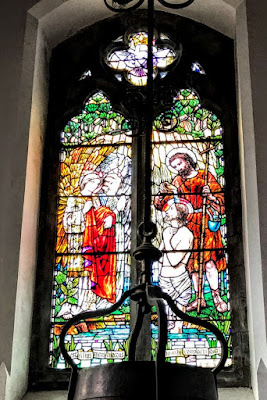 The Baptism of Christ … a window by AE Child in the baptistry (Photograph: Patrick Comerford, 2021)

The origins of An Túr Gloine and that of the cathedral’s decorative scheme are inextricably linked. The studio’s first orders included three apse windows for the new cathedral in 1903. Virtually all of the studio’s artists are represented, including Michael Healy, Alfred E Child, Sarah Purser, Beatrice Elvery, Ethel Rhind, Hubert McGoldrick, Catherine O’Brien and Evie Hone.

There is a Saint Brigid window by Evie Hone, an Annunciation, Agony in the Garden, Resurrection, Baptism in the Jordan, Saint Ita, Saint Patrick and Centurion of Great Faith, all by Childe. Sarah Purser designed the Crucifixion and Nativity windows herself a small Saint Brendan window – a rarity, as she mostly confined herself to managing projects rather than glass-painting.

There are 10 windows by Michael Healy, including the first one he both designed and executed, Saint Simeon, and also one of his undisputed finest, The Last Judgment, completed in 1940, a year before he died. His other windows include the Madonna and Child, Saint Anthony and Saint John, Christ the King (1930) and Our Lady Queen of Heaven (1934), the Ascension and Saint Joseph (1935).

The cathedral also has windows by Hubert McGoldrick and and window of Saint Brigid by Patrick Pye in the porch.

Apart from the windows, the sculpture and ironwork, the woodwork, statues and reliefs, altars and railings, pews and confessionals, sanctuary lamps and candelabra all have artistic merit and value. Sculptors represented are John Hughes and Michael Shortall. The architect William Alphonsus Scott also contributed designs for metalwork and woodwork. 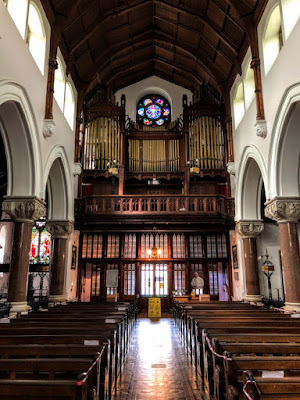 Michael Shortall designed the altar, altar rails, executed the corbels and capitals, the baptismal font, and a statue of Saint Brendan on the tower.

John Hughes is responsible for the marble Madonna and Child and the bronze relief of the Resurrection behind Scott’s plain but massively impressive high altar as well as a series of small bronze plaques on the altar rails and sanctuary gate, and on the bishop's confessional.

The Stations of the Cross in opus sectile, with inscriptions in Irish, were made by Ethel Mary Rhind of An Túr Gloine in 1928-1933.

The post-Vatican II arrangements, including the bishop’s throne, ambo, altar and wooden bench, were designed by Ray Carroll, and enhance this treasury of Irish art.

This cruciform-plan gable-fronted cathedral is built on a south-north axis, with the altar at the south end, rather than the traditional east-west alignment.

The cathedral has an aisled nave of five bays, with lean-to side aisles, clerestory, double-pile transepts, a canted apse, a three-bay sacristy, a square-plan four-stage tower surmounted by an octagonal broach spire with lucarnes. 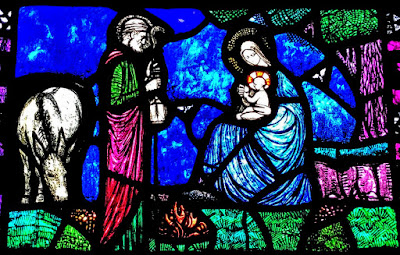 Jesus, Mary and Joseph and the Little Donkey … a panel in the Saint Joseph window by Michael Healy (Photograph: Patrick Comerford, 2021)

The Clonfert Diocesan Museum, in the grounds of Saint Brendan’s Cathedral, has an important collection of objects of ecclesiastical interest. There are also 24 embroidered banners, mostly depicting Irish saints as well as vestments by the Dun Emer Guild. The banners were designed by Jack B.Yeats, his wife Cottie, George William Russell and PC Smith.

The oldest chalice in the collection, the Matheus Macraith Chalice, is almost 500 years old. The collection of carved wooden figures includes the Kilcorban Madonna (ca 1180), the oldest surviving wooden statue in Ireland.

The site is enhanced by its gardens and WA Scott’s railings and gateway.

The mediaeval gate tower at the north-east corner of site is also known as Latimer Gate. It dates from the 15th century and was originally a castellated structure. It is the only remaining town gate in Loughrea. 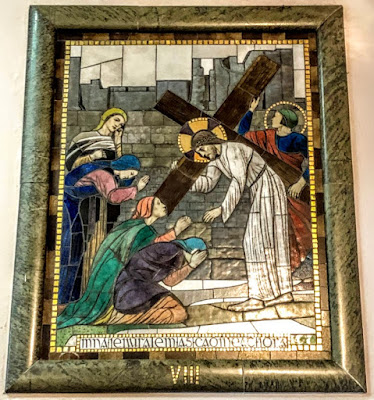 Station VIII … the Stations of the Cross were made by Ethel Mary Rhind of An Túr Gloine in 1928-1933 (Photograph: Patrick Comerford, 2021)

Before Saint Brendan’s Cathedral was built, the town of Loughrea and the Diocese of Clonfert were served by the Pro-Cathedral or Saint Brigid’s Church, built ca 1740 and altered in 1787.

Father Anthony Fahy, a Loughrea-born missionary in Argentina and a friend of Admiral Browne, was the rector of the Pro-Cathedral in 1836.

The former Pro-Cathedral is now a funeral parlour. Kilboy’s Funeral Directors was established by Patrick Kilboy in 1903. A font dating to 1780 can be seen at this site. 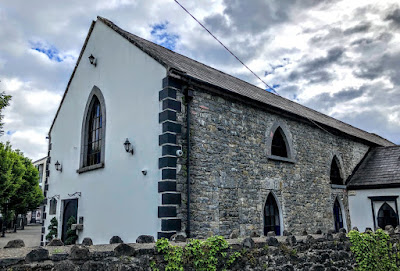 For Saint Brendan's Cathedral, Clonfert, Co Galway, the Church of Ireland cathedral in the Diocese of Clonfert, see HERE.