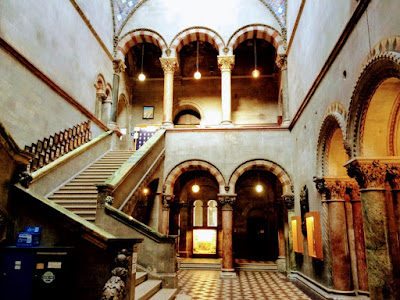 Inside the Museum Building in Trinity College Dublin, which is inspired by the Byzantine architecture of Venice (Photograph: Patrick Comerford)

The Museum Building, on the south side of New Square in Trinity College Dublin (Photograph: Patrick Comerford)

The Museum Building, on the south side of New Square in Trinity College Dublin, was finished in 1857, and today it is home to the university’s Departments of Geology, Geography, Mechanical Engineering and Civil Engineering.

I first got to know the Museum Building when I was sitting exams in the early 1970s. I was training to be a Chartered Surveyor, but never practiced. Instead, I became a journalist, first as a freelance contributor to the Lichfield Mercury and then as a staff member of the Wexford People and The Irish Times.

Little did I realise as I sat those exams in the Museum Building that in later years I would return to TCD as a member of the academic staff. Today, when I show friends and students around the campus, I point this out as one my favourite works of architecture in Dublin.

The Museum Building was designed by Thomas Deane and Benjamin Woodward. The building is inspired by the Byzantine architecture of Venice, and was built in 1853-1857.

In 1833, the board of Trinity College Dublin initiated a competition for a new Museum Building to house the geological and other collections that were then housed in the large room of Regents House.

Tenders were invited for almost 20 years, and the project was delayed for years because of concerns about the site and its close proximity to the Old Library. Samuel Haughton, Professor of Geology, investigated the site, and reported many layers of made ground, ash pits and calcareous drift, and he concluded that the site was suitable for the new building.

Finally, the design submitted by Deane and Woodward in 1852 for a museum and lecture hall complex was accepted in April 1853. However, a row with the college architect, John McCurdy (1824-1885), caused further delays and unfortunate alterations to the original designs by Deane and Woodward.

On 23 May 1853, a contract for foundations was agreed with the builders Cockburn and Son for £24,000 and ground was broken a few months later. The exterior of the building was fully in place by 1855. However, it was not until 1857 that the interior was completed and the building as a whole finished. 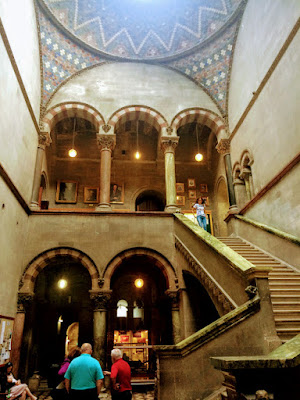 The Museum Building was designed at the same time as John Ruskin was publishing ‘The Stones of Venice’ (Photograph: Patrick Comerford)

At the time, Deane and Woodward worked out of 3 Upper Merrion Street, and shared space with Offices of the Great Industrial Exhibition of 1853. This exhibition show-cased textiles and paintings, as well as native Irish limestones and granites, along with Portland stone from England, which began to replace Georgian-era Calp limestone as the material of choice for many Irish architects. In addition, the industrial revolution facilitated access to new sources of stone as building and decorative materials.

For a building designed to house a geology collection, it is appropriate that the Museum Building was built from a vast number of different and contrasting forms of stone. College tradition says that some form of stone from every quarry in Ireland open at the time was used somewhere in the building.

The interior walls are faced with Caen Limestone. The pillars, balustrades and bannisters contain examples of Irish marbles and Cornish serpentine, while the domed roof is made of blue, red and yellow enamelled bricks. 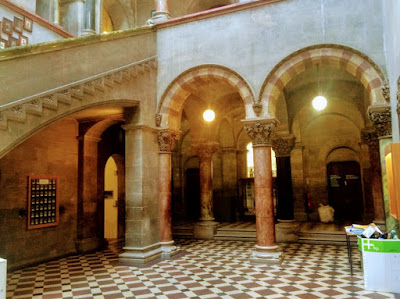 The Museum Building is one of the first statements in architecture of Pre-Raphaelite ideals (Photograph: Patrick Comerford, 2016)

The Museum Building is one of the first statements in architecture of pre-Raphaelite ideals, and is strongly influenced by the principles then being laid out by John Ruskin in The Stones of Venice, published in three volumes in 1851-1853. This is a palazzo-style building, inspired by the Byzantine architecture of Venice, and finished in Lombardo−Romanesque detailing, with over highly decorated 108 carved capitals.

The most impressive part of the interior is the hallway and the staircases. The columned hallway leads into a double-domed chamber with a splitting staircase leading into two Byzantine arcades. 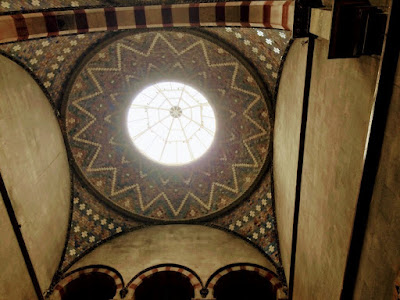 One of the two domes in the double-domes chamber (Photograph: Patrick Comerford)

The interior walls are of Caen Stone, and the large domed central hall makes heavy use of Irish stone. The Romanesque arches between each column use alternating yellow and red stained blocks which sit upon bases and capitals of heavily-carved Portland Stone.

The central staircase and floors of the upper balconies are also made of Portland Stone. The original floor was composed of Yorkstone flagstones, further Portland Stone, Welsh Ffestiniog stone, with black squares of black slate. However, this floor later relaid.

The main entrance hall of the building has 14 full columns and 18 half-columns made of Irish Marble, although the only true marble is Connemara Serpentine. There were some problems sourcing the materials needed to have every column complete, which after more petitioning from Deane resulted in the half columns.

The only non-Irish stone used in the columns is a dark red Serpentine from Ruan Minor, on the Lizard peninsula in Cornwall.

The white Celtic crosses on the ceiling illustrate how religious thought still appeared in a natural science building in the 19th century.

The Tympanum of Caen stone depicts a 19th century variant of the coat of arms of Trinity College Dublin (Photograph: Patrick Comerford, 2016)

The exterior is richly decorated and the detailing around the windows and doorways is still impressive. Overall the exterior amounted to just under half the cost for the entire building.

The exterior walls were first built from Calp limestone, and were then faced with 22.86 cm (9 inches) of Ballyknockan granite from Co Wicklow. The quoins, columns and 108 capitals, as well as the string course which can be seen half way up the building, are all of Portland stone from the Isle of Portland, Dorset.

The tympanum over the heavy wooden main door displays the coat of arms of TCD in a popular 19th-century variant that is slightly different from the one used by the college today. It is of Caen stone from Caen, France. 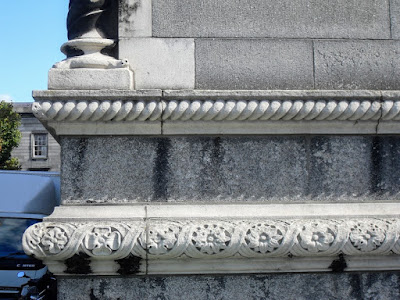 Deane and Woodward commissioned the brothers John and James O’Shea, stonemasons, to carve flora and fauna in the Irish marble columns and serpentine balustrades of the building.

The O’Shea brothers are said to have been the sons of a stone carver from Ballyhooley, Co Cork, who may have been from the same family as the O’Sheas of Callan, Co Kilkenny. They worked for Deane and Woodward on the Museum Building in TCD (1853-1857), the Kildare Street Club, Dublin (1859) and the University Museum, Oxford (1854-1861). After finishing at the Oxford Museum, local tradition in Callan maintains they returned to Callan that they were active in Callan from the late 1860s until the early 1880s. Edward O’Shea, who later carried on the business in Kilkenny, was the Mayor of Kilkenny in 1904-1906.

While they were working with Deane and Woodward on the Museum Building in TCD, the O’Shea brothers worked from wildflowers gathered from the College Botanic Gardens in Ballsbridge, and were given mostly free rein to carve what pleased them.

Their carvings include squirrels, birds, shamrocks and cats. Seven carvings relate specifically to Aesop’s Fables, and the central panel, revealed during the conservation project in 2013, refers to Charles Darwin and his theory of the evolution of species.

At the Kildare Street Club nearby, also designed by Deane and Woodward, the O’Shea brothers carved a scene of monkeys playing billiards as if they were men. They had also carved monkeys on a first floor window in the Oxford Museum of Natural History, which horrified the Bishop of Oxford.

Later, in a public debate in Oxford in 1860, the Bishop of Oxford, Samuel Wilberforce, argued against Darwin’s explanation, and with singular lack of grace during the debate asked Thomas Huxley whether he was descended from monkeys on his grandfather’s side or his grandmother’s side. Huxley muttered: ‘The Lord has delivered him into my hands’ and replied that he ‘would rather be descended from an ape than from a cultivated man who used his gifts of culture and eloquence in the service of prejudice and falsehood.’

It was popularly believed that O’Shea claimed to be ‘carving the Darwinian theory’ – but more about that later this week when we look at the Kildare Street Club. 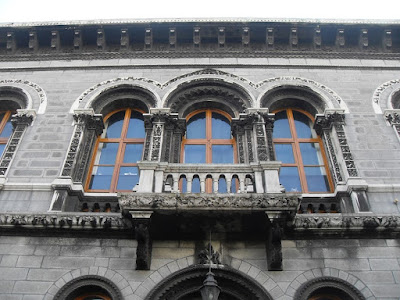 The balconies on the Museum Building show the influence of Ruskin’s idealisation of Venetian Gothic architecture (Photograph: Patrick Comerford)

After the Museum Building was completed, the President of the British Association for the Advancement of Science said on his visit to Dublin in 1857: ‘It was highly gratifying that the first use to which that building has been applied should have been so closely allied to the noble interests of science and art.’

Meanwhile, in 1857, McCurdy put forward proposals to redesign the Library by Thomas Burgh. His designs were turned down by the board in favour of a design by Deane and Woodward, who replaced the original flat roof with a great Romanesque barrel vault and mansard roof. 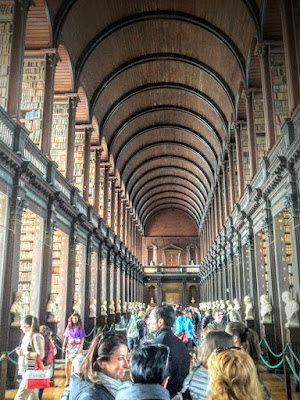 College records from May 1860 show how already the smoggy atmosphere in Dublin had adversely affected the stone of the Museum Building. After years of laying behind sooty deposits the ashlar of the building became obscured.

However, a three-year conservation programme of the Museum Building began in 2010. When it was completed in 2013, many of the carvings that were almost invisible had been restored to their original state, and this building is once again one of the most impressive works of architecture in Dublin. 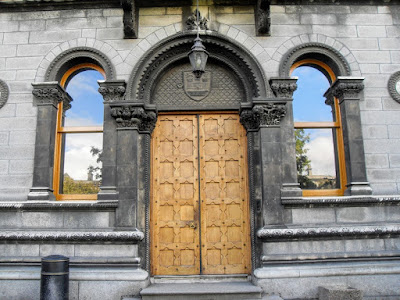