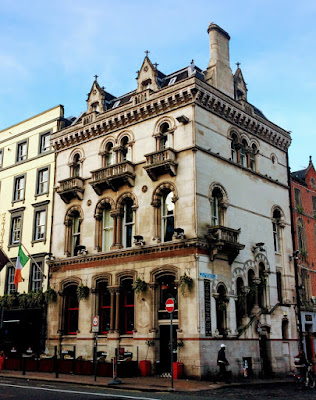 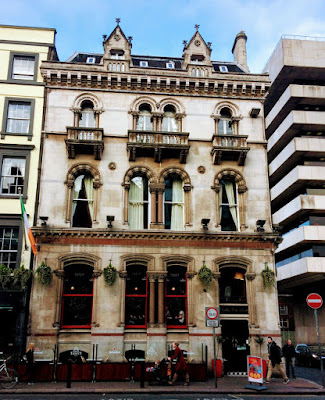 On the corner of Fownes Street and Dame Street, No 46-47 Dame Street was built in 1869-1871 for the Crown Life Assurance Co. The building was designed by Sir Thomas Newenham Deane in 1868 and was modelled on the London head office of Crown Life, which was designed in 1858 by his former partner, Benjamin Woodward.

This part of Dame Street is along a busy traffic route and on the edges of the Temple Bar area. For tourists it is a pedestrian thoroughfare, linking Christ Church Cathedral with the Bank of Ireland Trinity College Dublin or leading into the Temple Bar area. 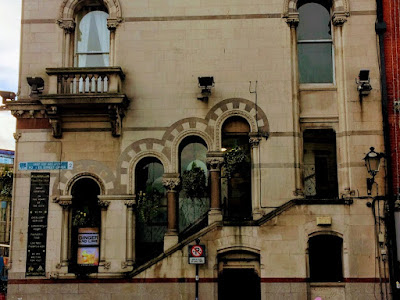 Venetian-style arched windows and balconies on the Dame Street side of the building (Photograph: Patrick Comerford)

Like the Museum Building in Trinity College Dublin, Deane designed this building was built in Portland stone in the style of a Lombardo-Romanesque palazzo, drawing on the principals set out a decade earlier by John Ruskin in The Stones of Venice.

The builder was Gilbert Cockburn was the builder, who also built the Museum Building in TCD, and the total cost was £4,000.

On the Dame Street façade, there are Venetian-style arched windows and balconies. On the ground floor, we can see stilted segment-headed openings to the former public offices on the ground floor. The main entrance originally stood at the east end of this façade, on the viewer’s right. 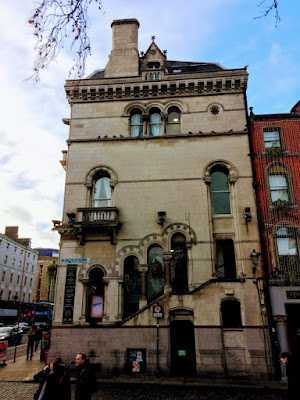 The romantic features on pretty side elevation on the east or Fownes Street façade include five Ruskin-influenced stepped, round-headed windows, three grouped together in an ascending arcade, on the staircase.

Slender colonnettes frame the angle of the building, and deep bracketed cornices create strong horizontals at the piano nobile and eaves levels.

The Portland stone used by Deane is offset by a granite plinth, a frieze, still and impost courses of red sandstone, polished pink granite colonnettes to the windows, and capitals of grey and white limestone.

This building was rebuilt by James Franklin Fuller in 1917, and the builders for this renovation were Farmer Brothers of Nottingham Street, Dublin. 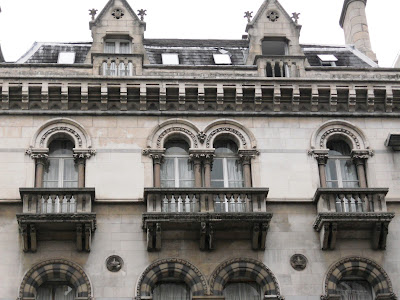 Venetian-style balconies on the Dame Street side of the building (Photograph: Patrick Comerford, 2016)

I first got to appreciate the exterior of this building and to know the interior when I was training as a Chartered Surveyor, because at the time the building housed the Dublin Corporation Planning Office.

This was an ironic use of the building in the late 1960s and early 1970s, for the planners almost allowed it to be lost to Dublin. It was saved from demolition because Skidmore Owings Merrill, in the masterplan for the area they submitted to CIE in the 1970s, identified it as one of two buildings worth saving in the Temple Bar area.

Since then, this building has been renovated, the interior has been greatly remodelled, and this is now part of a larger hotel. 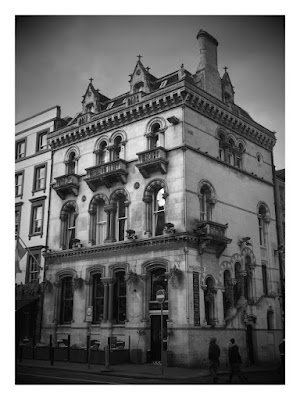 The Crown Life Building was almost lost to Dublin due to planners’ decisions in the 1970s (Photograph: Patrick Comerford, 2016)

I can't thank you enough for this Patrick. I have been looking at this building in absolute awe for many many years. Thank you!