Cahir Castle, a childhood
‘pit stop’ and a Butler
stronghold for 600 years 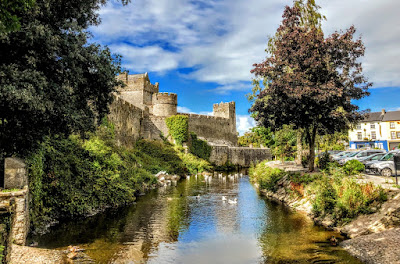 Cahir Castle, Co Tipperary … one of the largest and best-preserved castles in Ireland (Photograph: Patrick Comerford, 2020)

When we were children, Cahir was the first of the ‘pit stops’ on the road between Cappoquin and Dublin. There were others too, including Thurles and Castle. But, with ice creams in hand, we often stood on the banks of the River Suir admiring Cahir Castle, one of Ireland’s largest and best-preserved castles.

During those childhood years, Cahir Castle was acquired at auction by the Irish State, but it was not open to the public.

During my two-week, late summer ‘Road Trip’ over the last two weeks, partly with sentimental memories of those ‘pit stops,’ but more in hope of getting inside Cahir Castle, despite the present Covid-19 restrictions. During the ‘Road Trip,’ we had already visited two of the great Butler residences in the region: Kilkenny Castle and the Ormond castle and manor in Carrick-on-Suir.

Cahir Castle stands proudly on a rocky island on the River Suir in the centre of Cahir. The castle was built in the 13th century and for centuries it was one of the principal strongholds and residences of the Butler family. 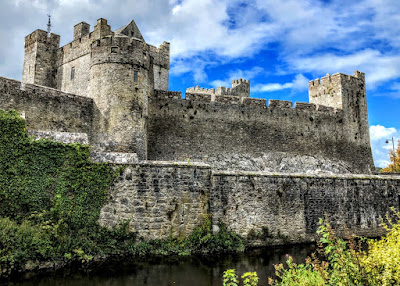 Cahir Castle came into the hands of the Butler family in 1375 (Photograph: Patrick Comerford, 2020)

The first castle on the site was built from 1142 by Conor O’Brien of Thomond on or near the site of an earlier, third century fortification known as a cathair or stone fort, that gives its name to the town. Cahir Castle was designed as a defensive castle. It appears to grow from the actual rock on which it stands, and for centuries it has been the scene of sieges and bombardments.

At the time it was build, Cahir Castle was at the cutting edge of defensive castle design and the design of the castle was so effective that it was believed to be impregnable. But later in its history it captured three times.

The castle was granted to James Butler, newly created Earl of Ormond, in 1375 as a reward for his loyalty to Edward III. His son James, 2nd Earl of Ormond, passed the lands around the barony of Iffa and Offa West to his children, and Cahir Castle was enlarged and remodelled by the Butlers from the 15th to the 17th centuries. 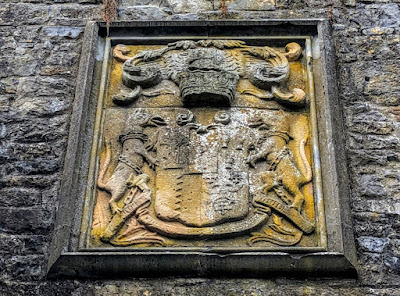 The coat-of-arms of the Butlers of Cahir on the walls of Cahir Castle (Photograph: Patrick Comerford, 2020)

His son, Edmund Butler, 2nd Baron Cahir, died in 1560 without male heirs to succeed him. The title was revived in 1583 for Sir Theobald Butler as 1st Baron Cahir. He was the son of Piers Butler of Cahir and the nephew of Thomas Butler, 1st Baron Cahir, the original title holder. He had already been knighted in Clonmel in 1567.

The title was regranted with the unusual remainder to the heirs general of the first baron, which made his great-nephews, Theobald Butler and Thomas Prendergast, co-heirs. Prendergast ceded the title to Theobald Butler, preferring that the title should remain in the male line of succession.

Theobald Butler, as the new 1st Baron Cahir, ruled much of the Barony of Iffa and Offa West in Co Tipperary. He married Mary Cusack, daughter of Sir Thomas Cusack of Cussington, Co Meath, Lord Chancellor of Ireland. He died in Cahir on 28 April 1596. His sons included:

1, Thomas Butler, 2nd Baron Cahir;
2, Piers Butler, father of Thomas Butler, third baron;
3, Edmund Butler of Cloghcullie, Co Tipperary, who married Eleanor, daughter of Pierce Butler of Callan, Co Kilkenny and had a son Thomas;
4, James Butler, who was involved in the rebellion of 1598. He died in 1630 and was the father of the fifth baron. 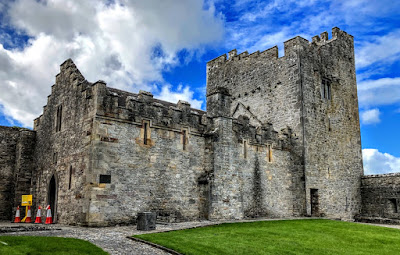 Theobald Butler’s eldest son, Thomas Butler (ca 1568-1627), was the 2nd Baron Cahir. Cahir Castle had reached its present appearance by 1599, and the only major alterations after that were in the 1840s

Cahir Castle was captured in 1599 after a three-day siege by an army under the Earl of Essex, when heavy artillery was used against it for the first time. For a year, it was under the charge of Sir Charles Blount. Lord Cahir joined the rebellion of High O’Neill, Earl of Tyrone, in 1601 and was attainted for treason, but he later obtained a full pardon. He had no sons to succeed him when he died on 31 January 1627.

The castle was the scene of a scandalous killing that year, when Cahir’s son-in-law, Lord Dunboyne, murdered his distant cousin, James Prendergast, in a dispute over an inheritance: he was tried for the killing but acquitted.

Thomas Butler, 3rd Baron Cahir, was the son of Piers Butler, nephew of the second baron and grandson of the first baron. During the Irish Confederate Wars, the castle was besieged twice more. It was surrendered without a fight by Lord Cahir’s guardian, George Mathew, to Murrough O’Brien, Lord Inchiquin, in 1647.

Thomas died ca 1648, and the Cahir estates, castle and title passed to his grandson, Pierce Butler, 4th Baron Cahir. During his lifetime, the castle was surrendered again in 1650 to Cromwell without a shot being fired. Thomas recovered the castle after the Caroline restoration, but when he died in 1676 he had no sons to succeed him. 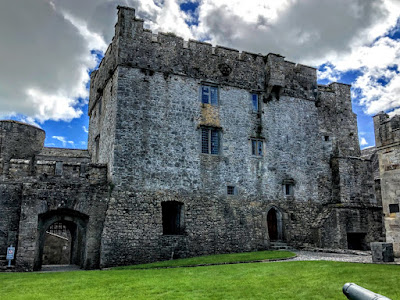 Cahir Castle was recovered by the Butler family after the Caroline restoration (Photograph: Patrick Comerford, 2020)

James Butler, 7th Baron Cahir, son of the sixth baron, succeeded in 1744 and died in 1746. His brother, Pierce Butler, 8th Baron Cahir, died in Paris on 10 June 1788, ending the line of descent from Theobald.

James Butler, 9th Baron Cahir, was the son of Richard Butler of Ballinahinch who was the grandson of Edmund Butler and a great-grandson of the first baron. He was in India at the time of his predecessor’s death and he never received the news of his new title as he died a month later in July 1788.

Richard Butler (1775-1819), 10th Baron Cahir, was the son of the ninth baron. He took his seat in the Irish House of Lords in 1796. He was given the additional titles of Viscount Cahir and Earl of Glengall in the Irish peerage in 1816.

He commissioned the royal architect John Nash to design Saint Paul’s Church, the Church of Ireland parish church in Cahir, the adjoining Erasmus Smith Schoolhouse and probably also the Swiss Cottage in Cahir. He died at Cahir House of typhus in 1819, at the age of 43.

Richard Butler (1794-1858), 2nd Earl of Glengall and 11th Baron Cahir. Cahir Castle had fallen into ruin in the late 18th century, but it was partially restored by him in the 1840s and the Great Hall was partly rebuilt in 1840.

The titles became extinct when he died in 1858. He was buried at Saint Paul’s Church. 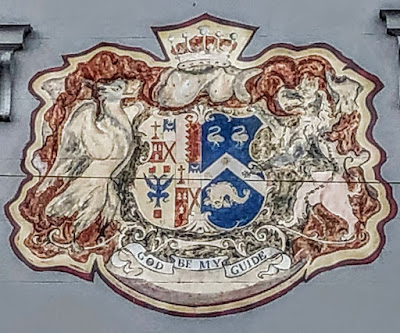 The coat-of-arms of the Earls of Glengall on the wall of a former hotel in Cahir (Photograph: Patrick Comerford, 2020)

Lady Margaret Butler, elder daughter and heir of Lord Glengall, married Lieut-Col the Hon Richard Charteris, second son of the 9th Earl of Wemyss and March. Using a combination of her mother’s trust and Charteris family funds, her family bought back Cahir Town and Kilcommon Demesne, and built Cahir Park, or Cahir Lodge, across the river from the castle, as the family home. It was designed by Lanyon, Lynn and Lanyon.

Cahir House, Cahir Park, Kilcommon Demesne and much of the estate were sold at auction in 1962, along with 2,000 acres of mountain and forestry and a three-mile stretch of the River Suir. Cahir Park, somewhat ingloriously, was destroyed by fire shortly after it had been sold.

The sale took over a week to conduct, and realised about £250,000, then a fabulous sum. And so, the direct line of Butler ownership in Cahir came to an end after almost 600 years. 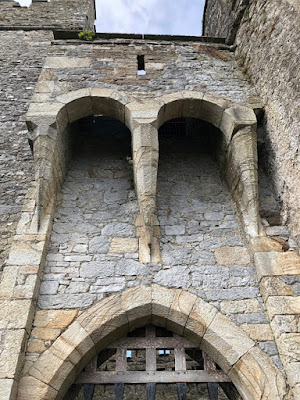 Cahir Castle became the property of the Irish state in 1962 (Photograph: Patrick Comerford, 2020)

Cahir Castle became the property of the Irish state and in the late 20th century it was named a National Monument. Much of the original structure remains, and the castle retains its impressive keep, tower and much of its original defensive structure. It is now managed by the Office of Public Works, which maintains the castle.

The castle is well preserved, and in normal times guided tours and audio-multilingual audio-visual shows provide a detailed history of the castle, although we walked around the castle unaccompanied and on our own last week.

As for the title of Baron Cahir, which was created with remainder to heirs general, it became abeyant with the death of Lord Glengall in 1858, but it could potentially be claimed by descendants of the family if they are identified. 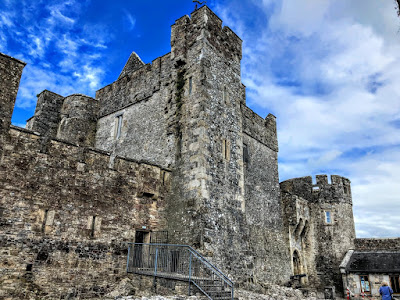