Monkstown Castle stands
on a prominent roadside
site by a roundabout 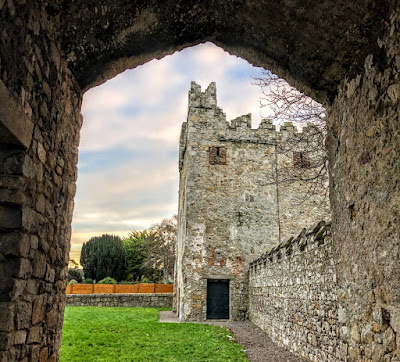 Monkstown Castle is a landmark archaeological site in suburban south Dublin, standing in a nicely kept green area on a prominent site by a large roundabout near the village of Monkstown.

I visited the remains of the castle last week, after a few hours in Dún Laoghaire, while I was in Dublin for medical check-ups. The castle is in quite a striking location on the edge of the roundabout and the site must be a surprise for motorists when they first see it.

According to the Martyrology of Tallaght, Saint Mochonna founded Holmpatrick monastery on an island off Skerries. After a Viking raid in the year 798, some of the monks escaped and established a church at Carrickbrennan, south of Dublin, where they were protected by a local chieftain named Mac Gillamocholmog.

The monks dedicated their church to Saint Mochonna and farmed the land given to them by Mac Gillamocholmog.

The monastic foundation and lands at Monkstown and the grange of Carrickbrennan were granted to the Cistercian monks of Saint Mary’s Abbey, Dublin, in 1200. These Cistercian monks built their grange near the church, and a village grew up around it. Parts of their lands extended as far south as Bulloch Harbour, near Dalkey, where the monks built a fishing harbour. 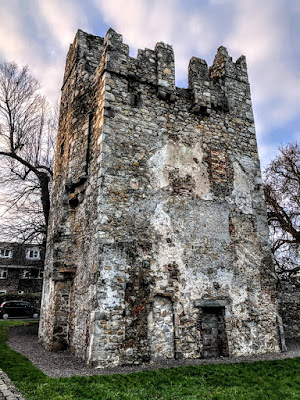 For years, the monks were subject to attacks from the O’Toole and O’Byrne families who had taken refuge in the Wicklow mountains. By the 13th or 14th century, the Cistercians built a castle at Monkstown to administer and protect their lands and another castle at Bulloch Harbour to protect their fisheries.

Monkstown Castle originally consisted of three strong towers and thick walls surrounding a large house within. Two of the towers remain today but there is nothing left of the inner house. One of these fine towers and the gatehouse still survive.

Saint Mary’s Abbey was dissolved at the dissolution of the monastic houses in 1539-1540, during the Tudor Reformation. Monkstown Castle was granted to Sir John Travers who came to Ireland from Cornwall. Travers was Master of the Ordnance and a Groom of the Chamber to the King. 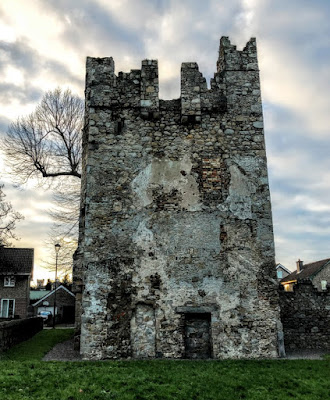 Sir John Travers lived at Monkstown Castle from 1557, and his other, many grants of land included Rathmore and part of Haynestown, near Naas, Tomogue, and estates in Co Carlow. He married Genet Preston of Gormanston, and when he died in 1562, he was buried in Carrickbrennan Graveyard, at the site of Saint Mochonna’s Church.

The castle later passed to James Eustace, 3rd Viscount Baltinglass, through his marriage to Sir John’s granddaughter, Mary Travers. In 1580, the castle was used as a rebel stronghold during the Desmond rebellion. When Eustace escaped and fled Ireland, Monkstown Castle was awarded to Sir Henry Wallop, Vice-Treasurer of Ireland, proprietor of Enniscorthy Castle, Co Wexford, and ancestor of the Earls of Portsmouth.

Lord Baltinglass died in exile in Spain in 1585, and the castle and lands at Monkstown were returned to his widow Mary in 1589. By then, she had married her second husband, Sir Gerald Alymer of Donadea, Co Kildare, in 1587. When she died in 1610, Lady Aylmer left Monkstown Castle and her estates to Henry Chevers of Goat Castle, the second son of her sister Catherine and John Chevers. 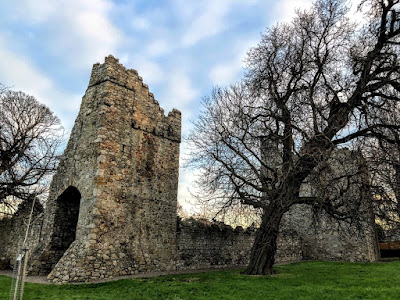 When Henry Chevers died in 1640, Monkstown Castle and the surrounding lands were inherited by his eldest son, Walter Chevers. The Chevers family was forcibly removed from Monkstown in 1653 by the Cromwellian Commissioners, and transplanted to Killyan, Co Galway. Monkstown Castle was then granted to General Edmund Ludlow (1617-1692), Cromwell’s Master of the Horse in Ireland, and one of the signatories of the death warrant of Charles I.

At the Caroline Restoration in 1660, Ludlow fled into exile in Switzerland, and Walter Chevers was restored to his estate at Monkstown Castle. He lived there until he died on 20 December 1678, and he was buried at Monkstown.

In the early 19th century, Monkstown Castle was the home of the Dublin Quaker merchant, James Pim. 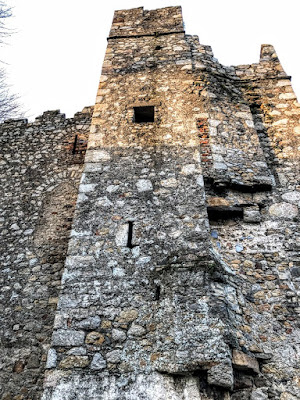 Early paintings show it as a large castle with a number of buildings, although many of these have long since disappeared, and nothing survives of the castle built in the 13th and 14th century.

The main tower seen today probably dates from the later 15th century, but its western part is a later addition. The tower formed one side of a large hall that has disappeared. It is four storeys high, with a sentry box along the stairs, and has high, distinctively Irish battlements with machicolations – projections from the battlements through which stones could be dropped on unwelcoming visitors.

This tower was the principal building in a bawn or walled courtyard that was partly rebuilt in the 19th century. The tower still looks quite solid, but the doors are bricked up. The three-storey gatehouse into the bawn and the vaulted room beside it were built at the same time as the main tower. The former inner courtyard is now a well-kept lawn.

Today, Monkstown Castle occupies a prominent, visible site on a roundabout at the junction of Carrickbrennan Road and Castle Park. The surrounding area is residential, and there are many places to park so visitors can stroll around the castle ruins and the site. 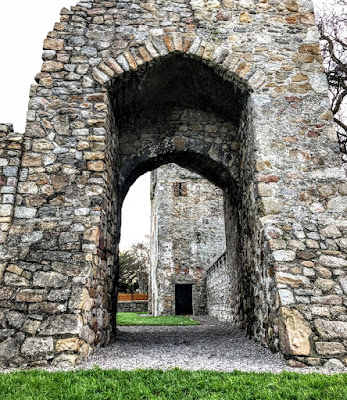