As I was preparing my Epiphany sermon for this morning, it was tempting, as in many previous years, to fall back on simply reading TS Eliot’s poem, ‘Journey of the Magi.’

In this poem, Eliot does not resort to the Epiphany tradition of referring to the magi as kings, nor does he give their number as three. The only number three refers to ‘three trees on the low sky,’ and the only concession to the tradition that the magi were kings is in his reference to ‘our places, these Kingdoms.’

I wonder, as he pondered ‘these Kingdoms’ while writing the first of his Ariel poems in 1927, whether Eliot was conscious of his wife Vivienne’s family connections with Kingstown. Kingstown had become Dún Laoghaire five years earlier in 1921, and the name of the harbour was changed only in 1924.

When I was in Dublin last week for a medical check-up on my pulmonary sarcoidosis and an injection for my B12 deficiency, I decided to visit Dún Laoghaire and once again try to find out more about those connections.

Haigh Terrace is a cul-de-sac of six early Victorian houses, and it runs northward from Upper George’s Street, almost opposite McDonald’s, to the former Mariners’ Church.

No 1 and No 2 are separated by a laneway from the other houses on Haigh Terrace, and are shown in Griffith’s Valuation as owned by James Haigh, but with low values. Of these two houses, No 2 was Haigh’s office. The low value probably means that they were not complete at that time. Haigh also owned No 3, which was shown in Griffith’s Valuation at full value. This probably means that it was completed but not yet leased to a tenant.

James Haigh (1797-1878) was an engineer and a millwright, and he had many business interests. He is also shown as the lessor of a number of houses at Mount Haigh, just around the corner on Upper George’s Street. 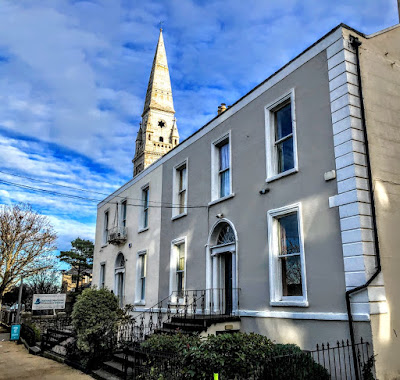 No 1 and No 2 Haigh Terrace, with the spire of the Mariners’ Church, Dún Laoghaire, in the background (Photograph: Patrick Comerford, 2020)

James Haigh’s daughter, Mary Haigh, was not in the conventional meaning, ‘an Anglo-Irish Protestant girl from Dublin with financial expectations,’ as Vivienne’s biographer Carole Seymour-Jones paints her. Nor is it possible that she was forced to ‘sail from Kingstown to Liverpool’ due to ‘the 1845 potato famine.’

In fact, Mary moved to England before the Famine, and was living with her father, James Haigh, in Paradise Street, Bury, in Lancashire, by 1841. She married Charles Wood, a gilder and picture framer from Bolton, in Bramham, near Wetherby, Leeds, in August 1850. She may have been related to the Revd Dr Benjamin Bentley Haigh (1803-1869), a Congregational minister at Tadcaster (1828-1845), and for 26 years headmaster of Bramham College, Yorkshire, and his son, Edward Haigh (1832-1911; MA, Cambridge), who was a schoolmaster in a boarding school in Bramham.

Mary inherited her father’s seven semi-detached houses in Kingstown, along with Eglinton House, a substantial property rby, which gave eventually her family financial stability. Her inheritance from her father’s property portfolio in Kingstown allowed their only surviving son, Charles Haigh-Wood (1854-1927), to study at the Manchester Art College and the Royal Academy School in London.

As a boy, Charles was sent to nearby Bethel Sunday School in Henry Street, an independent Congregationalist chapel, and attended Bury Grammar School.

The rents from the semi-detached houses in Ireland made a substantial difference to the family fortunes. They made it possible for Charles Wood to sign the 999-year lease on a house at 14 Albion Place for £780, and for Charles and Mary to send their promising son to Manchester Art College, where he won several prizes.

Charles left Bury in 1873 to attend the Royal Academy School in London. At some stage, he decided to combine his parents’ surnames as Haigh Wood – later hyphenated as Haigh-Wood – perhaps when his mother Mary inherited her father’s Irish properties in 1878.

Charles Haigh-Wood inherited his mother’s property when she died, as well as the family home at 14 Albion Place in Bury. He was an artist and a member of the Royal Academy of Arts, but his inheritance from the Haigh family made him a landlord and provided him with a substantial private income.

Charles Haigh-Wood married Rose Esther Robinson (1860-1941) from London, and their first child, Vivienne, was born on 28 May 1888 in Bury while they had returned there for an exhibition of his paintings.

Vivienne was registered at birth as Vivienne Haigh, although as an adult she called herself Haigh-Wood. Her father, Charles Haigh-Wood, used his income from the houses on Haigh Terrace to move his family to Hampstead, by then a fashionable part of north London. They settled at 3 Compayne Gardens around 1891, and Vivienne’s brother Maurice was born there in 1896.

Although her family was financially secure, Vivienne’s biographer, Carole Seymour-Jones, says she was ashamed of her connection to Lancashire, perceived as working-class, and was left with a sense of inferiority that made her self-conscious and snobbish, especially when mixing with TS Eliot’s aristocratic London friends.

She described the Haigh and Wood families in a letter to her brother-in-law, Henry Ware Eliot, as ‘the most dreadful people really; very, very rich manufacturing people; so provincial.’ She made no reference to her grandmother’s Irish background.

Vivienne was committed to an asylum in 1938, five years after TS Eliot deserted her, and by then she was a lonely, distraught figure. Shunned by literary London, she was the ‘neurotic’ wife Eliot had left behind.

However, in Painted Shadow (2002), Carole Seymour-Jones gives a voice to the woman who, for 17 years, had shared a unique literary partnership with Eliot but who was scapegoated for the failure of the marriage and all but obliterated from literary records.

Vivienne would wrote in her diary: ‘You who in later years will read these very words of mine will be able to trace a true history of this epoch.’ She believed – as did Virginia Woolf – that she was Eliot’s muse. Yet Vivienne knew the secrets of his separate and secret life.

Out of this emotional turbulence came one of the most important English poems of the 20th century, ‘The Waste Land,’ which Carole Seymour-Jones argues cannot be fully understood without reference to the relationship of the poet and his first wife, who had family roots in Haigh Terrace in Kingstown or Dún Laoghaire. 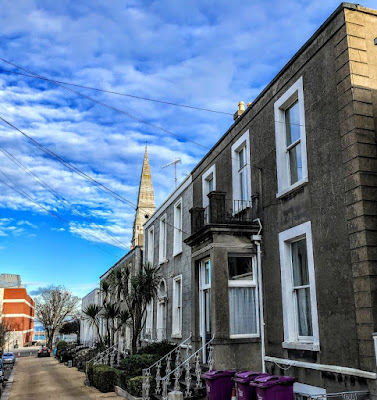