Praying through poems and
with USPG: 9 January 2023

‘This child of God … to whom kings homage pay’ (Tony Barnard) … the Visit of the Magi seen on a panel on the triptych in the Lady Chapel in Lichfield Cathedral (Photograph: Patrick Comerford / Lichfield Gazette)

We have spent some days in Hungary, visiting Saint Margaret’s Church in Budapest and Father Frank Hegedus with the Anglican mission agency USPG (United Society Partners in the Gospel) and the Diocese in Europe. We travel on to Helsinki later this morning to visit the Revd Tuomas Mäkipää and Saint Nicholas’ Anglican Church to see how the church and church agencies in Finland are working with refugees from Ukraine.

Before leaving for Budapest last Thursday, I recalled how both of us had friendships through the years with Anne and Tony Barnard from the days when he was Canon Chancellor of Lichfield Cathedral and an active supporter of USPG.

So my choice of a seasonal poem this morning is ‘This Child of God’, by Tony Barnard and Paul Spicer.

Canon Tony Barnard wrote the words of this lively carol when he was Canon Chancellor of Lichfield Cathedral, while the setting was composed by Paul Spicer, who was then living in the Cathedral Close in Lichfield and artistic director of the Lichfield Festival.

The carol was commissioned in 2005 by Lichfield Cathedral Special Choir – now called the Cathedral Chorus – to celebrate the birth of the daughters of the two cathedral organists at that time.

Paul Spicer wrote his Easter Oratorio (2000) and Advent Oratorio (2009) in collaboration with Bishop Tom Wright, a former Dean of Lichfield Cathedral (1994-1999) and Paul Spicer was still the Artistic Director of the Lichfield International Arts Festival. The Easter Oratorio was conceived in 1998 to mark the 1,300th anniversary of the founding of Lichfield Cathedral, and while its first performance was in Ely Cathedral, it received its proper première at the Lichfield Festival on 15 July 2000.

‘You shall go out with joy’ is Easter Hymn 4 in the Easter Oratorio and is based on Isaiah 55: 12 ff. Paul Spicer called this tune ‘Darwin Close’ after the enclosed close behind his house between Lichfield Cathedral and Erasmus Darwin House, with its herb garden planted by Charles Darwin’s grandfather, Erasmus Darwin. He is a lay member of the Chapter of Lichfield Cathedral.

‘This Child of God’ is a tuneful carol for mixed voices and organ sways and dances, reflecting the colourful imagery of Tony Barnard’s text.

This Child of God, Tony Barnard and Paul Spicer:

This child of God, who’s born on Christmas day,
whom shepherds view, to whom kings homage pay,
is called to be a shepherd and a king.
Sing alleluias, praise this wondrous thing.

This child of God is shepherd, born to lead
through pastures green, by banks of golden reed;
nor left, nor right, but ever on the way,
which leads to Calvary and endless day.

This child of God, this Son of David’s line,
is root of tree, a shoot, a fruitful vine,
it shelter gives to all who see the way
which leads them to the cross and Easter day.

This child of God, this many spangled star,
is light’ning flash which dazzles near and far;
bright light to guide our feet along the way,
that leads to Calvary and endless day.

This child of God is called to save mankind,
to open eye and ear, the heart and mind;
to heal, and make the lame man leap and play
along the road that leads to Easter Day.

This child of God, let angel voices praise.
Give God the glory, live his loving ways.
Let peace on earth o’er come our worldly strife
through all who walk his road throughout their life. 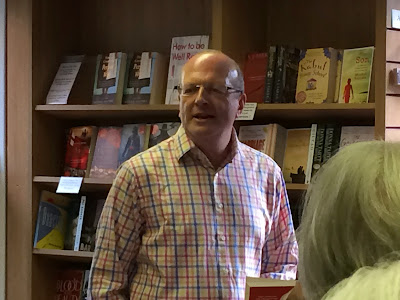 The composer Paul Spicer speaking at the launch of his biography of Sir George Dyson in the Cathedral Bookshop in Lichfield (Photograph: Patrick Comerford)

Let us pray for those who risk life and limb to spread the gospel of Jesus Christ. May we have courage and sensitivity in the sharing of our faith. 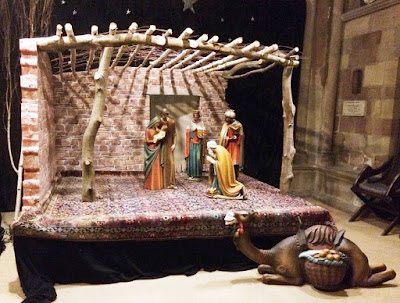 ‘This child of God … to whom kings homage pay’ (Tony Barnard) … the Magi arrive at the crib scene in Lichfield Cathedral (Photograph: Patrick Comerford)