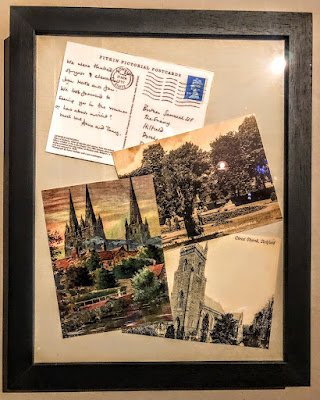 There was a time when I sent postcards to friends and family from all my destinations, whether I was on holidays or on working trips.

And the postcards I received often ended up as bookmarks, along with theatre tickets and restaurant receipts, souvenirs of places I had visited or reminders that people had thought of me when they were away.

Two of us are in Heathrow Airport this evening, hoping to catch a plane to Budapest within the next hour or so for the first leg of a working week in Budapest and Helsinki. Charlotte and I are travelling with two other people from the Anglican mission agency USPG (United Society Partners in the Gospel) and the Anglican Diocese of Europe, visiting Hungary and Finland to see church-based projects working with Ukrainian refugees.

This is hardly going to be the sort of trip for sending postcards back home. But then, I think, I stopped sending postcards a long time ago. If I buy postcards these days, they are usually as keepsakes, pretty reminders of places I have visited and enjoyed.

Stamped and sent postcards are now such a rarity that they have become collectors’ items, and provide interesting discussions for local history groups.

In Lichfield, the late Dave Gallagher amassed a large collection of postcards that introduced many of the discussions on the Facebook group, ‘You’re probably from Lichfield if …’

After dinner in the Hedgehog Vintage Inn in Lichfield, I have often sat beneath two interesting collections of postcards. One collection includes a postcard showing the house in Lichfield where Samuel Johnson was born and another depicting Samuel Johnson’s statue in the Market Place.

A second collection of postcards includes Lichfield Cathedral, Beacon Gardens and Christ Church, Lichfield, and the back of one postcard has a personal message to Brother Samuel SSF, congratulating him on becoming the Guardian of Hilfield Priory in Dorchester. It is dated 17 March 1992 and signed ‘Anne and Tony.’

Sitting under those photographs in Lichfield again last summer, Charlotte quickly identified the senders of the signed postcard as Anne and Tony Barnard. his is a Pitkin postcard, and Canon Anthony Nevin (Tony) Barnard is the author of the Pitkin Guide to Lichfield Cathedral, as well as a book on Saint Chad and the Lichfield Gospels and a children’s guide to Lichfield.

Tony and Anne Barnard are now living in retirement in Barton under Needwood. I got to know them while he was the Canon Chancellor of Lichfield Cathedral and they were both involved in USPG. They were regular participants in the USPG annual conference in High Leigh and Swanwick, and we took part together in training days in Birmingham Cathedral for USPG volunteers and speakers.

When I met them again in September at the Annual Celebration and Reunion of former USPG staff and mission personnel at Holy Trinity Church, Sloane Square, I told them of how, only a few weeks earlier, Charlotte and I sat beneath the postcard they had sent from Lichfield Cathedral 30 years earlier.

As we now head off to Budapest and Helsinki on behalf of USPG, I am thinking of how events in life can come full circle over just a few years.