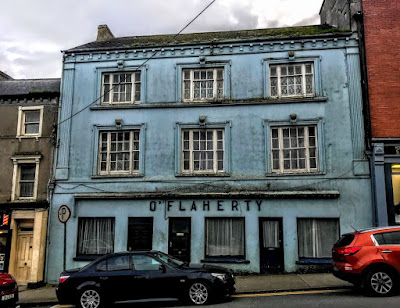 O’Flaherty’s on Broad Street is an interesting shopfront in Charleville (Photograph: Patrick Comerford, 2019)

Earlier today, I was looking at two 19th century terraces of houses on Clanchy Terrace in Charleville, Co Cork, that attracted my attention as a I strolled around the town on Saturday afternoon [5 January 2019].

One terrace is a Georgian terrace of three houses, dating from the 1830s, that includes an early convent of the Sisters of Mercy and the birthplace of Eliza Alice Lynch (1833-1886), the Charleville-born woman who has become the ‘National Heroine of Paraguay.’ The Victorian terrace on the other side of the street dates from around 1880.

Three other houses in Charleville also dating from around 1880 caught my eye on Saturday afternoon too: two houses on Clanchy Terrace that include the former rectory that later became a Christian Brothers’ monastery, and an unusual shop on Broad Street, which leads from the Main Street to Clanchy Terrace. 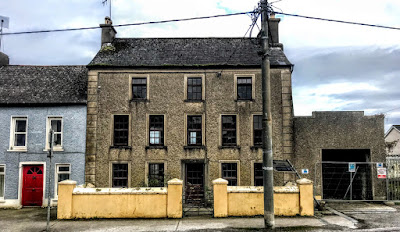 The vista downhill from Broad Street is closed by this house on Clanchy’s Terrace (Photograph: Patrick Comerford, 2019)

Looking down Broad Street towards Clanchy Terrace, O’Flaherty’s on the right or south side of the street was also built around 1880.

This terraced, three-bay, three-storey house and shopfront now looks like needing care and attention. But it still has attractive rendering and windows upstairs, and has many unusual features, including the mannered volute, a simpler interpretation of a classical motif.

The Art Deco-style fascia and signage give a second, 20th century style to the building and the overall streetscape on Broad Street and creates a pleasant contrast with both the rest of the building itself and the neighbouring properties on Broad Street.

At the bottom of Broad Street, the vista downhill is closed on Clanchy Terrace by an interesting five-bay house that stands on a prominent position. This attached three-storey house, also built around 1880, has five-bay ground floor and first floor and a three-bay second floor, with a single-bay single-storey extension that may have once been used as a garage or a workshop.

This house has an unusual asymmetrical façade that provides interest and a contrast to the rest of the street. The windows may indicate the internal layout and rooms in the house. Its interesting features include the terracotta chimneypots and stone sills. The render ornamentation is typical of Charleville and adds textural interest to the site.

Further north on Clanchy Terrace, the former Victorian rectory was also built ca 1880, and half a century later became the Christian Brothers’ monastery in Charleville in 1927.

This former rectory and monastery is typical of modestly sized religious structures in Ireland at the time. It is a detached, two-storey Victorian house with a five-bay front elevation. There is a slightly-projecting gable-fronted south end bay, with a canted bay window at the south-east.

Although the house is now appears abandoned and the gates are secured with chains and a padlock, this is still an attractive building on Clanchy Terrace. The bay window and gabled bays of the former monastery give a lively appearance to the façade, along with the variations of render that add textural interest and articulate the structure.

The ornamental elements include decorative, carved, timber bargeboards with carved foliate designs, the eaves brackets and the piers at the entrance that show the work of local craftsmen.

I was not able to get in to see the outbuildings set around a courtyard and that are said to add character to this site. But I did catch a glimpse of the round-headed, coloured-glass windows on the first floor of the extension, which probably indicate the location of the brothers’ chapel.

The Christian Brothers came to Charleville in 1866 at the invitation of the Parish Priest, Father Thomas Croke. They opened a school on the Main Street, and 200 boys were registered on the first day. The primary school was located on the ground floor, the secondary school was upstairs, and the brothers lived in the attic.

A new school opened in 1970 and the old school was handed back to the parish. Since then, the school building on Main Street has fallen into disrepair and has been put up for sale.

Past pupils included the future Taoiseach and President of Ireland Éamon de Valera, who received his secondary education in Charleville from 1896 to 1898. He said in 1921, ‘I regretted every moment even when I was forced to watch my youth fall away.’ 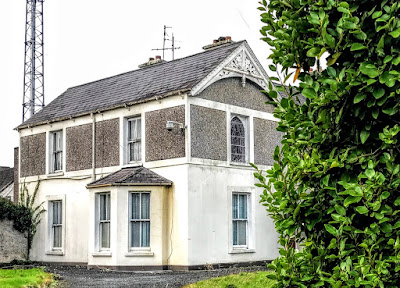