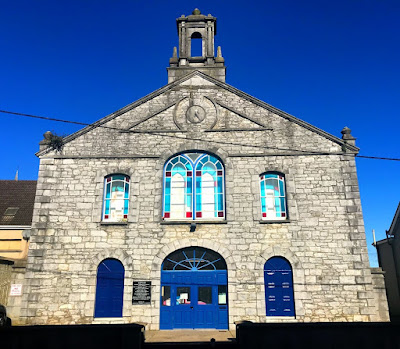 The Community Centre on Chapel Street in Charleville, Co Cork, was built as the Roman Catholic parish church in 1812 (Photograph: Patrick Comerford, 2018)

The Community Centre on Chapel Street in Charleville, Co Cork, looks for all the world like an old Welsh chapel, with its matching pair of doors that could be separate entrances for men and women, its high, almost austere, Georgian Classical façade, and its decorative bellcote with a decorative urn and obelisks.

You would be right in thinking that this had once been used for worship, for it was built over 200 years ago – not as a Presbyterian meeting house or Methodist chapel, but as a Roman Catholic church in the days before the last of the Penal Laws were finally abolished. For almost a century it served as the parish church of the north Cork town, and it was here almost 200 years ago that Eliza Lynch, the doctor’s daughter who would become ‘Queen of Paraguay,’ was baptised in 1834.

This former church was built in 1812 in the Classical style, and it retains its grand and splendidly composed façade. The fine details include a cut limestone clock face and polychrome glass.

The building is unusual as a Roman Catholic church of this size and style built before Catholic Emancipation. The Georgian Classical style was more popular in building 18th century dissenting chapels, including those for Presbyterians, Methodists, Congregationalists and Baptists.

The ground floor has an elliptical-arched entrance opening flanked by round-headed window openings, with cut limestone block-and-start surrounds and timber panelled double-leaf doors. There is a fanlight and a keystone with the date 1812 at the central opening.

The elliptical-arched central opening on the first floor is flanked by segmental-headed openings, with cut limestone block-and-start surrounds, cut limestone sills, and margined timber framed polychrome glass with a double lancet motif in the central window.

The ashlar limestone bellcote at the apex was added in 1829, the year of Catholic Emancipation. It is designed like a triumphal arch, with free-standing columns supporting the lintel over a round-headed arch, and it is surmounted by a carved limestone urn and flanked by obelisks.

Local lore claims the bellcote was the first erected and the bell the first tolled in the immediate aftermath of Catholic Emancipation.

This building continued to serve as the Catholic parish church in Charleville for more than 90 years until Holy Cross Church was built in 1898-1902. It then became a Parochial Hall, and is now Charleville Community Centre. 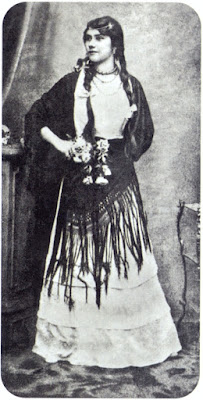 Eliza Lynch, the ‘Queen of Paraguay’ … photographed in Paris in 1855 when she was about 21

A plaque on the façade of the former church recalls that this was the place where Eliza Lynch, ‘National Heroine of Paraguay’, was baptised on 2 May 1834.

At one time, Eliza Lynch (1833-1886) was the most vilified woman in Latin American history, and was seen as an ambitious courtesan who had seduced the future President of Paraguay, Francisco Solano López, turning him into a bloodthirsty dictator. However, this reputation was created by propaganda during the Paraguayan War. In recent years her reputation has been restored, thanks to the work of two Irish historians, and she is now regarded the ‘National Heroine’ of Paraguay.

Eliza Alice Lynch was born in Charleville on 19 November 1833. Her father was Dr John Lynch, and her mother, Jane Clarke Lloyd, came from a long line of naval officers. She was baptised in the former Catholic Church on Chapel Lane in Charleville on 2 May 1834.

At the age of 10, she emigrated with her family to Paris to escape the Great Famine. When her father returned to Ireland and died in north Cork in 1846, Eliza’s mother took refuge with her brother-in-law, Commander William Boyle Crooke, in Boulogne-sur-Mer, and Eliza remained in France.

In 1850, when she was only 16, Eliza married Xavier Quatrefages, a young French officer who was soon posted to Algeria. She moved with him to North Africa, but deteriorating health caused her to return to Paris at the age of 18 to live with her mother in the Strafford household.

With the right social introductions, Eliza soon found herself in the elite circle surrounding Princess Mathilde Bonaparte and quickly set herself up as a courtesan.

Eliza was described as having a Junoesque figure, golden blonde hair and a provocative smile. In 1854, Eliza met General Francisco Solano López, son of President Carlos Antonio López of Paraguay.

At the time, the young general was training in the Napoleonic army. Eliza returned with him to Paraguay later that year. There she became his partner, and they had six children.

Her marriage to Quatrefages was annulled on the grounds that he had not received permission from his commanding officer to marry and that he and Eliza had no children together. He remarried in 1857, but Eliza and Francisco Solano López never married.

It is said that Eliza was the reason Lopez was so ambitious, although she later claimed she had no knowledge of politics and did not meddle in political affairs. She was detested by the elite but adored by the common people. By 1860 she had become famous as hostess to Latin America’s leading statesmen and diplomats.

After President Carlos Antonio López died in 1862, his son, Francisco Solano López succeeded him as president. Eliza became the de facto first lady, and she spent the next 15 years as the most powerful woman in Paraguay and the unofficial ‘Queen of Paraguay’ for two ecstatic years.

Eliza became a national heroine in her adopted country and fought alongside López during the War of the Triple Alliance (1864-1870) in which Paraguay was at war with Brazil, Argentina and Uruguay.

Throughout the war, Eliza led a group of women, Las Residentas, including soldiers’ wives, daughters, lovers and sisters, who supported the soldiers.

Eliza was at the Battle of Cerro Corá on 1 March 1870 when López was killed by the Brazilian forces. The Brazilians then headed towards the civilians in order to capture them. The eldest son of López and Lynch, Juan Francisco, who had been promoted to colonel and was 15, was with her. The Brazilians told him to surrender, but he replied Un coronel paraguayo nunca se rinde (‘A Paraguayan colonel never surrenders’).

When he was shot dead by the allied soldiers, Eliza jumped to cover her son’s body, and called out, ¿Ésta es la civilización que han prometido? (‘Is this the civilisation you have promised?’).

Eliza then buried both López and her son with her bare hands in the jungle before she was taken prisoner.

She was taken on the Princesa to Asuncion, where she was banished from Paraguay by the new government. She returned to Europe with her remaining children, but five years later she returned to Paraguay to claim her former property. On arriving, however, she was tried and banished from the country permanently by President Gill.

Eliza Lynch died in obscurity in Paris on 25 July 1886. In 1961, she was proclaimed a ‘National Heroine.’ Later, her body was exhumed and brought back to Paraguay on the orders of the dictator, General Alfredo Stroessner. She is now buried in the national cemetery, Cementerio de la Recoleta.

In their book Eliza Lynch – Queen of Paraguay, the Irish historians Michael Lillis and Ronan Fanning discuss Eliza’s Irish origins and life story, and restore her reputation, rescuing her from the legacy of the propaganda of her 19th century detractors.

Eliza Lynch, the ‘Queen of Paraguay,’ is honoured each year in her native Charleville. In 2014, her great-grandson, Miguel Angel Solano Lopez, the ambassador of Paraguay to Ireland, visited Charleville and unveiled a plaque at the former church recalling her baptism there in 180 years earlier.

The plaque on the former parish church commemorates the baptism of Eliza Lynch in 1834 (Photograph: Patrick Comerford, 2018)