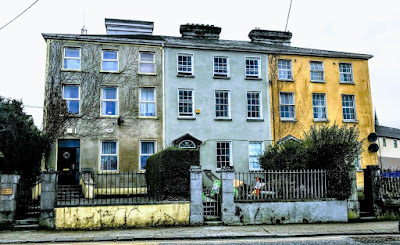 The Georgian houses on Clancy Terrace include the first Mercy convent in Charleville and the house where Eliza Lynch was born (Photograph: Patrick Comerford, 2019)

I took Saturday afternoon off [5 January 2019], and two of us visited Charleville in north Co Cork and nearby Bruree on the borders of Co Limerick and Co Cork.

When I visited Charleville in September, I had strolled around the streets, admiring the architecture of the houses and commercial buildings, visiting the churches and shops, and heard about the story of Eliza Alice Lynch (1833-1886), the Charleville-born woman who has become the ‘National Heroine of Paraguay.’

On Saturday afternoon, I visited Clanchy Terrace, with its interesting buildings, including the former rectory, the first convent of the Sisters of Mercy in Charleville, and two terraces of 19th century houses.

The first house at the south or left end of the terrace on the west side of Clanchy Terrace is an end-of-terrace, three-bay, three-storey house, built ca 1830. It has a hipped artificial slate roof with carved limestone chimneystacks and a render eaves course.

The square-headed door opening has a render surround, a replacement uPVC door with sidelights and overlight, and is approached by flight of cut limestone steps. However, looking at the two other houses on the terrace, this house has lost its carved timber engaged columns that originally supported a timber pediment with a spoked fanlight and carved cornice.

Like the other houses on this terrace, it is set back from the street with a painted rendered stone wall, cast-iron railings, and square-profile dressed limestone piers.

This fine house is prominently sited and presents a strong façade to the streetscape. The form of the building and its elevations are classically inspired and heavily influenced by the 19h-century fashion for diminishing windows, a common feature of town houses such as this in Co Cork.

Along with much of its original form, the house also retains notable features such as the cut-stone steps and the carved limestone chimneystack.

The second, mid-terrace house is also a three-bay three-storey house, built ca 1830. It too has a pitched artificial slate roof with a carved limestone chimneystack and a render eaves course.

The house has a square-headed door opening, approached by a flight of cut limestone steps. The replacement uPVC door is flanked by carved timber engaged columns supporting a timber pediment with spoked fanlight and cornice. The form of the handsome house is embellished by the decorative doorcase, with classical features such as the pediment and engaged columns, providing a focus for the façade.

The house retains its six-over-six pane timber sash windows, that are typical of terraced 19th-century houses in Ireland. The site retains cut stone steps, piers with simple caps, and cast-iron railings, which illustrate the skill of masons of the time, as does the carved limestone chimneystack.

This house was given to the Sisters of Mercy by the Clanchy family. The Sisters of Mercy arrived in Charleville and set up a house here on 29 October 1836. This was the order’s third house, and Catherine McAuley, Sister Mary Angela Dunne and two novices came from Baggot Street, Dublin, to Charleville on the invitation of the parish priest, Father Thomas Croke, and Mary Clanchy, whose family gave their name to Clanchy Terrace.

The nuns continued to live in this house until a new convent was built a few years later. These nuns in Charleville went to the Crimean War in 1855, and also established convents in Buttevant and Midleton, Co Cork, New Inn, Co Tipperary, Kilmallock, Co Limerick, and Bathurst, New South Wales, Australia.

The house at the right or north end of this terrace on Clanchy Terrace stands on a prominent corner site. This end-of-terrace, three-bay, three-storey house was also built ca 1830, and, like the other houses on this terrace, it has a hipped artificial slate roof with carved limestone chimneystacks and a render eaves course.

This end-of-terrace house presents a symmetrical and regular façade to the streetscape of Charleville, continuing the form of the adjoining houses. The provincial Georgian style doorcase provides a decorative focal point, the diminishing windows emphasise the vertical thrust of the building, and the house retains interesting and well executed features such as the chimneystack, surrounding wall and cast-iron railings.

This is the house where Eliza Lynch was born on 19 November 1833. Her father was Dr John Lynch, and her mother, Jane Clarke Lloyd, came from a long line of naval officers. She was baptised in the former Catholic Church on Chapel Lane in Charleville on 2 May 1834, but her family later moved to Paris. A woman of renowned beauty, she had an intriguing life as a Paris courtesan and mistress to the president of Paraguay, where she moved, before eventually being forced into exile back in Paris, where she died in 1886.

On the opposite side of the street, a less imposing but equally elegant terrace of houses was built half a century later, ca 1880. The terrace begins at the left or north end with a two-bay three-storey house with attic accommodation.

This substantial house retains its one-over-one pane timber sash windows. The gate and railings are examples of late 19th and early 10th century metalwork and the round-headed window and its unusual slated sill to the rear add interest to the rear elevation.

The second house on this terrace is a six-bay, three-storey house, with a square-headed integral carriage. This large house provides a structural contrast to the terraces of mainly two and three-bay houses on the street and retains much of its handsome and regular form.

The terrace ends at the right or south end with a pair of three-bay, three-storey houses.

There are other interesting houses on this street, and I hope to look at them later today. But I left Charleville on Saturday evening with an image of the contrasting lives lived by the Mercy Sisters who came to Clancy Terrace to start their convent in Charleville and Eliza Lynch who moved from Clancy Terrace to an intriguing life in Paris and Paraguay. 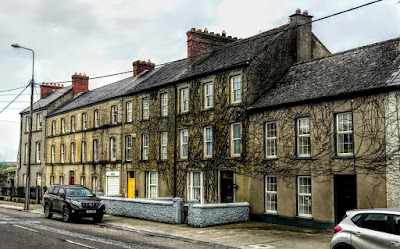 The Victorian terrace of houses on Clancy Terrace dates from the 1880s (Photograph: Patrick Comerford, 2019)