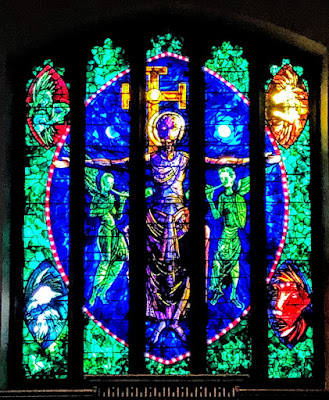 Christ in Majesty … the East Window by John Piper and Patrick Reyntiens in the Chapel of Saint John’s Hospital, Lichfield (Photograph: Patrick Comerford, 2021)

The current edition of the Church Times has two obituaries, both with Lichfield associations: the Right Revd Jonathan Gledhill, who as the Bishop of Lichfield in 2003-2015, who died on 1 November at the age of 72; and the artist Patrick Reyntiens, who collaborated with John Piper in many of his works, including ‘Christ in Majesty,’ the East Window in the Chapel of Saint John’s Hospital, Lichfield, and the great stained-glass windows in the Baptistry in Coventry Cathedral, and who died on 25 October at the age of 95.

Saint John’s Hospital and its chapel date back to 1135. Saint John’s Hospital, which provides sheltered housing for retired people, is one of the finest 15th century brick buildings in England. I had my first living experience of the light and love of God when I first visited this chapel as a teenager in 1971. It remains a living experience to this day, and I return to visit this chapel constantly as a pilgrim every year; it is also an experience that it seems appropriate to recall this evening on the Winter Solstice (21 December 2021).

The chapel and the east range facing Saint John Street are part of the original mediaeval foundation, but ancient and modern come together with John Piper’s magnificent interpretation of ‘Christ in Majesty’ in stained glass, which was installed in 1984.

John Piper (1903-1992) is best-known for his Baptistry window in Coventry Cathedral. Throughout his working life, he collaborated regularly with the artist Patrick Reyntiens.

Working closely with Patrick Reyntiens, Piper designed the stained-glass windows for the new Coventry Cathedral as well as the East Window in Saint John’s, Lichfield. This window is Piper’s last major undertaking, and was executed by Patrick Reyntiens in 1984. Piper’s inspiration for the window came from his drawings and paintings of Romanesque sculptures during his many visits to French from 1955 to 1975.

The window shows ‘Christ in Majesty,’ dressed in royal purple and flanked by angels within a mandorla surrounded by the symbols of the Four Evangelists: Matthew (angel), Mark (lion), Luke (ox) and John (eagle). They appear aged, perhaps because Piper was thinking of the residents of Saint John’s Hospital who pray daily in the chapel.

The window provides a splash of deep, vibrant colour above the altar in the chapel. But it is also a window of great solemnity power. The cross behind Christ is in the shape of the Mercian cross, the cross that also features on the coat-of-arms of the Diocese of Lichfield.

While Piper occasionally painted and etched, discussed or supervised some of the painting and etching of some of the glass used in his windows, he did not make the windows himself. The majority of the work was done by artist craftsmen, most particularly Patrick Reyntiens. Piper wrote in Stained Glass: Art or Anti-Art?: ‘The great windows of modern times are all the work of artists working with collaborative craftsmen.’ Sometimes he did not see the glass from delivering the cartoons until a window was near completion, before the leading process, as he trusted the interpreters. This was mostly the case with the Saint John’s window.

Patrick Reyntiens, who translated Piper’s design, moved to a new workshop in Dorset before he began making the window. Penelope Betjeman (1910-1986), writer and wife of the Poet Laureate John Betjeman, had first introduced them in 1954, and for over 35 years Piper collaborated with Reyntiens, who was 22 years younger and soon became one of the leading 20th century stained-glass artists in Britain.

Piper’s faith has been described as middle-of-the-road, traditionalist Anglican; Reyntiens was committed to his Roman Catholic faith, which he interpreted liberally but regarded as a central aspect of his life; in both cases, their faith added profundly to their projects.

The Reyntiens family was of Flemish and Russian descent. Patrick was born in at 63 Cadogan Square, London, on 11 December 1925, and was educated at Ampleforth, Regent Street Polytechnic School of Art, and Edinburgh College of Art, where the life models included Sean Connery, the future Bond actor, and where Patrick met his future wife, the painter Anne Bruce (1927–2006).

He soon focused on stained glass and received the Andrew Grant Fellowship, a two-year travelling fellowship in 1954-1955. When he returned to England, he became assistant to the master Arts-and-Crafts stained-glass maker Joseph Edward (Eddie) Nuttgens (1892–1982), a neighbour and friend of Eric Gill.

From Eric Gill’s ideas, Reyntiens inherited the concept of the need for integrity in one’s craftsmanship and a belief that to be a craftsperson was a ‘holy’ pursuit and a spiritual calling. Eventually, Patrick became Head of Fine Art at Saint Martin’s School of Art and Design in London.

After Penelope and John Betjeman introduced John Piper and Patrick Reyntiens, Patrick contributed much to John’s glass designs. He had suggested the theme behind the Coventry Cathedral window: the architect Basil Spence had originally conceived the Baptistry window to be of ‘pale, almost white glass with a slight tint of pink and pale blue.’ When John was stuck for inspiration, Patrick suggested that he should imagine a bomb or burst of glory, symbolising the power of the Holy Spirit at the centre of the Baptistry window and design a huge explosion of light around it, similar to the aureole of light around the dove above Saint Peter’s throne in the basilica in Rome.

Reyntiens also contributed to the inspiration of the Corona in Liverpool Metropolitan Cathedral. He recalled a description in Dante’s Divine Comedy of the Trinity as three great eyes of different colours communicating with each other. The spectrum of colour in the corona was arranged around three intense bursts of white light, which relate to each other across the lantern yet focus different colours into the interior liturgical space as the day progresses.

Encouraged by John Piper, Patrick and Anne began a school teaching design and manufacture at Burleighfield House, Loudwater, near High Wycombe, which they ran from 1963 to 1976. They then opened a larger teaching workshop in Beconsfield in 1977. 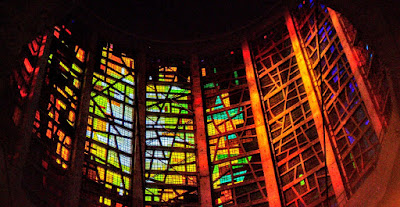 The glass for Saint John’s Chapel, Lichfield, is more conventional in its creation in leaded glass, although its design is deliberately bold and uses many techniques in painting and etching the glass, as well as creating different intensities of light.

By the late 1970s and early 1980s, when the Lichfield window was commissioned, tensions had arisen between Piper and Reyntiens over the financing of Piper’s projects. However, they continued to work together creating impressive, vibrant and harmonious art.

The tensions between these two great artists is reflected in their correspondence during the process of commissioning and making the window for Saint John’s. The delays in confirming and financing the project meant that Reyntiens suffered financial losses. He had ordered glass, booked studio time for the window and given more focus to the commission because of its significant importance. It proved to be a difficult commission practically and financially. Nevertheless, Patrick was professionally and spiritually committed to making a success of their last major collaboration.

The commission may have come about because John Piper had several connections with Lichfield. He was commissioned by the Dean of Lichfield, Frederic Iremonger, in 1947 to design the poster for the cathedral’s 750th Anniversary celebrations. He also designed a textile cover for the chancel reredos, and John and his wife were close friends of the photographer Janet Woods (1912-1998), daughter of Edward Sydney Woods, Bishop of Lichfield, and her husband, the wood engraver Alan Reynolds Stone. Piper also wrote in 1968 about his admiration for the 16th century Herkenrode Glass in Lichfield Cathedral.

The East Window in Saint John’s was commissioned to replace a window of plain quarry glass that had been installed in 1870. The ‘Christ in Majesty’ window, dedicated in 1984, was John Piper’s last major project with Patrick Reyntiens.

Patrick created the patterns for the leadwork, which in the blue mandorla of the chapel window especially adds extra life and radiance to Piper’s design.

In his detailed study of the window, Ian McKillop identifies many differences between Piper’s cartoon for the Lichfield window and the finished stained glass are seen in the differences between media and the choice of coloured glass. The blues of the mandorla, reds of the ox, greens of the angels and surround are far richer than in the cartoon. But the greatest difference in colour is found in the yellows of the light radiating from Christ’s face, the Cross and the lion.

The Cross becomes the radiant focus of the whole design. The face in the cartoon is quieter and vaguer than in the glass, and Piper’s original suggests a rather gentler expression; in the glass his face feels more severe. In interpreting Christ’s hands, Reyntiens was more subtle, creating their gentle gesture by simple painted and etched lines on the glass.

The variations of colours in Christ’s robes give his garments an enriched majesty. The blues around the sun and moon are also far more richly varied than in the cartoon. The painting of the angels is not as strong as the rest of the design but are close to Piper’s original.

Patrick Reyntiens was made an OBE in 1976. His last commissioned work was completed in 2017, when he was 92. His obituary in the current edition of the Church Times notes that ‘his career had been sustained by his deep faith.’ He died on 25 October 2021. Anne died in 2006; they are survived by two sons and two daughters. 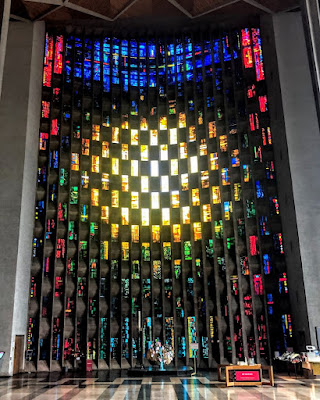 The Baptistry Window in Coventry Cathedral, designed by John Piper and Patrick Reyntiens … it is 81 feet high and contains 195 lights of stained glass in bright primary colours (Photograph: Patrick Comerford, 2021)