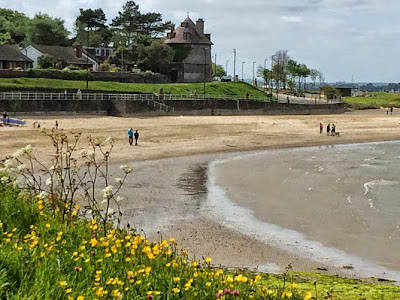 Hicks Tower looking down on the golden sands of Malahide this afternoon (Photograph: Patrick Comerford, 2015)

Today is the Day of Pentecost and I was preaching at the Cathedral Eucharist in Christ Church Cathedral, this morning.

Later, four of us went to lunch in Mexico to Rome, strolling through Temple Bar on our way there and back to the cathedral.

Later in the afternoon, two of us drove north to Portmarnock, intending to go for a walk on the long sandy beach there. But there was little or no space for parking and we were south of Robswall on the edges of Malahide before we found a place to park and to start our walk along the coast.

After a short time, the beautiful golden sand of Malahide was spreading out below us, with Hicks Tower looking down on the scene from its lofty perch on hillock above the road. 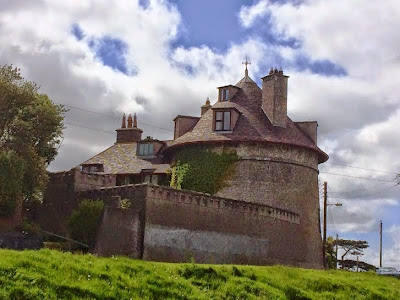 Hicks Tower, Malahide … built as a Martello Tower but converted into an Art-and-Crafts house by Frederick Hicks over 100 years ago (Photograph: Patrick Comerford, 2015)

Hicks Tower looks like a small French chateau, but in fact is a former Martello tower, first built around 1805 and remodelled ca 1911 as an Arts-and-Crafts style detached house.

It takes its name from the architect Frederick Hicks (1870-1965), who redesigned the tower and made it his home. There are two storeys to the main tower block with two further storeys providing additional attic accommodation. The return and stair block are attached to the rear.

The tower has a conical roof there is and hipped roof to right with red clay tiles and concrete ridge tiles. The tower also has an iron weathervane. There are roughcast panelled chimney stacks, and the walls are roughcast.

This is one of the 74 Martello towers built in Ireland between 1804 and 1815 when the British Government feared a Napoleonic invasion of Ireland. The walls of Hicks Tower are 6 ft thick and the ground floor would have been used to store 30 barrels of gunpowder, cannon balls and water tanks with a capacity of 465 gallons.

The first floor provided the living and sleeping quarters for the soldiers while the top floor, with a parapet, held a 24 pounder cannon. The tower was built to be bomb-proof and the original entrance was 10 feet from the ground. The swivel gun on the parapet had a range of about a mile.

It is said only wooden pegs and no nails were used in its construction, in case a spark from a soldier’s boot would blow the tower asunder. The mortar, holding the granite blocks together, is exceptionally strong, made up of lime, ash, hot wax and ox-blood.

Hicks took over the tower in 1910 and, with colossal labour, he cut windows in the wall and added a roof as he converted it into his home. 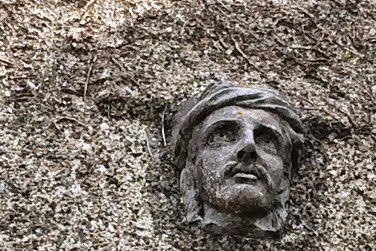 I spy with my little eye … a surprising figure in the wall of Hicks Tower, Malahide (Photograph: Patrick Comerford, 2015)

The Dublin-based architect Frederick Hicks was born in Banbury, Oxfordshire, on 16 May 1870, the son of Joseph Hicks, a linen draper, and his wife Mary. He was educated at Taunton School and received his architectural training at the London Architectural Association School and Finsbury Technical College.

After completing his articles with John William Stevens of London at the age of 20, he moved to Dunlin in 1890 to take up a trial appointment in the office of James Rawson Carroll. He later worked with William Henry Byrne and with Thomas Drew before setting up his own practice in Dublin in 1895.

He was working from the same premises as Frederick Augustus Butler at 5 Saint Stephen’s Green in 1898 and at 28 South Frederick Street and 35a Kildare Street from 1900 until Butler’s death in 1903.

In 1905, Hicks formed partnership with Frederick Batchelor at 86 Merrion Square. The 17-year partnership of Batchelor and Hicks lasted until 1922, when Batchelor retired.

Hicks continued to work from the same premises until 1945, and he was President of the RIAI 1929-1931. As an accomplished artist, he exhibited frequently at exhibitions of the Water Colour Society of Ireland and the Royal Hibernian Academy from 1926 to 1963. When he retired in 1945, he sold his practice to his assistant Alan Hope.

Hicks died at his home at The Tower, Malahide, on 24 April 1965 shortly before his 95th birthday and was buried beside his wife and a daughter in the churchyard at Saint Andrew’s Church of Ireland parish church, Malahide.
No 86 Merrion Square, with its much-photographed front door is now the offices of GVA Donal O'Buachalla, where my father was once a director until his retirement. 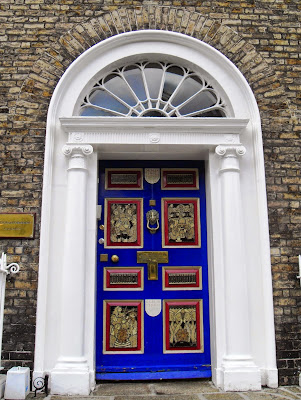 No 86 Merrion Square, Dublin, where Hicks practised as an architect from 1905 to 1945 ((Photograph: Patrick Comerford)

Hicks worked mainly on designing houses and on hospitals. As well as converting the Martello Tower into a house for himself around 1910, his other works include the Carnegie Free Library in Rathmines (1905-1913), the World War I memorial in All Saints’ Church, Grangegorman, Saint Thomas’s Church (1929-1932) in Cathal Brugha Street, off O’Connell Street, Dublin, now Saint George’s and Saint Thomas’s, and repairs to the stonework in Christ Church Cathedral, Dublin (1946).

Some years ago, Hicks Tower was owned by the lifestyle ‘yoga guru’ and controversial businessman Tony Quinn, but I am not sure whether he still lives there.

We continued our walk along the beach and the coastline and the beach, with views back to Ireland’s Eye and Howth Head, and out to Lambay Island and Portrane Peninsula, watching the yachts and sail boats moving in and out of Malahide Harbour.

We stopped for double espressos at the Food Fayre and Café, where it was a pleasure to sit out in the warm sunshine and the open air, enjoying what appears to be the arrival of early summer, before retracing our steps past Hicks Tower and Robswall Castle. 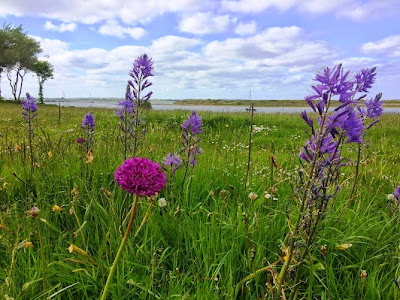 Walking back along the coastline in Malahide this afternoon (Photograph: Patrick Comerford, 2015)

Posted by Patrick Comerford at 20:48