Tales of the Viennese Jews:
8, Simon Wiesenthal and
the café in Mauthausen 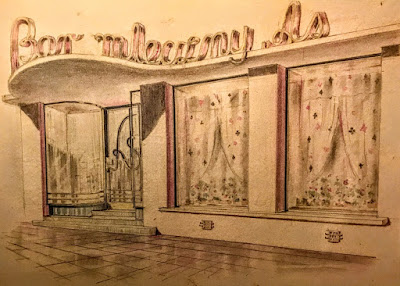 A sketch by Simon Wiesenthal for ‘Café As’ in the Jewish Museum in Vienna (Photograph: Patrick Comerford, 2019)

Throughout the Jewish Museum on Dorotheergasse, many of the exhibits refer to the work and legacy of Simon Wiesenthal, and a current exhibition is devoted to his studies and art – until this month’s visit to Vienna, I had never thought of him as an artist.

Simon Wiesenthal (1908-2005) was a Holocaust survivor, Nazi hunter, and writer, who is closely identified with Vienna. He is remembered for his tireless efforts to bring those responsible for the Holocaust to justice. He was also a trained architect. But when I thought of Wiesenthal and Mauthausen in the past, I did not think of cafés and coffee, cake and croissants, and art.

The ‘Café As’ (‘Café Ace) exhibition at the museum shows how the bright light of creativity and friendship can blossom in even the most trying of circumstances, and the coffeehouse drawings and plans by Simon Wiesenthal tells an implicit tale of survival and friendship.

Simon Wiesenthal was born on 31 December 1908 in Buczacz (Buchach), now in Ukraine but then in Galicia, a part of the Austro-Hungarian empire. He studied architecture at the Czech Technical University in Prague, then an important centre of modernism and functionalism.

He moved in 1932 to the Polytechnic University in Lviv (Lwów), then in Poland but now in Ukraine, and once an important city in the Austro-Hungarian empire. As well as working in an architectural practice, he also drew cartoons for a Zionist newspaper, Chwila, and for a satirical magazine, Omnibus.

He was living in Lviv at the outbreak of World War II. He survived the Lwów ghetto, concentration camps in Janowska (1941-1944), Kraków-Płaszów (1944) and Gross-Rosen, a death march to Chemnitz, and the concentration camps at Buchenwald and Mauthausen (1945).

By chance, Wiesenthal became friends in Mauthausen with the Polish writer, Edmund Staniszewski, a political prisoner who used a bureaucratic sleight of hand to keep Wiesenthal out of the gas chambers and also gave bread to his severely malnourished Jewish companion.

Staniszewski dreamt of opening a coffeehouse (‘Café As’) after the war, and his friend offered to design the building for him.

Even while he was still at Mauthausen, Wiesenthal began sketching out ideas using pens and paper ‘borrowed’ from the concentration camp offices. He worked on all aspects of the proposed café, much in the spirit of famous Viennese architects and designers like Wagner or Hoffmann, designing furniture, advertising, cake decorations, invitations, and even the uniforms of the waiting and kitchen staff.

In the weeks after the liberation of Mauthausen, Wiesenthal turned his sketches into dozens of detailed plans and drawings for Café As. Although Staniszewski never built his coffeehouse, he kept Wiesenthal’s drawings. These are now owned by the Jewish Museum and currently on display.

Selected drawings form the bulk of the present exhibition, with 80 drawings inviting visitors to wonder what might have been had Wiesenthal’s life taken a more innocent turn.

The drawings also provide another symbol of the triumph of perseverance, friendship and humanity in even the most difficult circumstances. And Café As looks like it might just have been the place where I would have found a fine double espresso.

The Café As exhibition also presents biographical details and examples of Wiesenthal’s talents with the pencil.

A section on his architecture studies includes exhibits such as his 1932 student report card from the Czech Technical University in Prague.

Some of Wiesenthal’s sketches of Mauthausen include the poignant ‘Transports,’ in which a giant skeletal SS officer swallows row after row of wagons full of people.

The exhibition also looks at his time immediately after the liberation of Mauthausen, when Wiesenthal worked with US army counter-intelligence. This includes a sweet letter to his wife Cyla anticipating their reunion.

After World War II, Wiesenthal dedicated his life to tracking down and gathering information on fugitive Nazi war criminals so that they could be brought to trial. He played a role in capturing Adolf Eichmann in Buenos Aires in 1960. He died in Vienna at the age of 96 on 20 September 2005 and was buried in Herzliya in Israel.

The Café As exhibition, curated by Michaela Vocelka, opened on 29 May 2019 and continues until Sunday 12 January 2020. 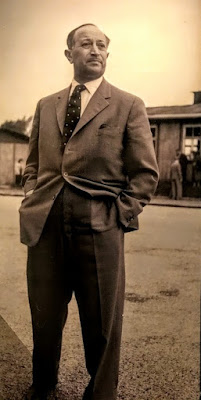 Simon Wiesenthal … a portrait in the Jewish Museum in Vienna (Photograph: Patrick Comerford, 2019)