Tales of the Viennese Jews:
16, three Holocaust survivors
who lived in Northern Ireland 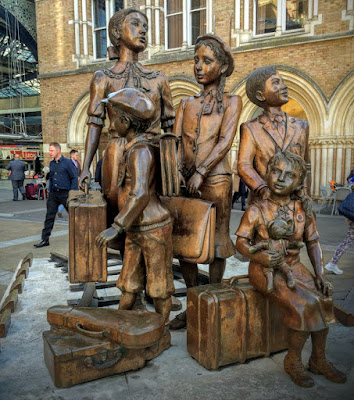 In the past week, I have been reminded of the stories of three Holocaust survivors who were born in Vienna and who moved to live in Northern Ireland after World War II: Inge Radford, who lived in Belfast and later in Millisle, Co Down, and Edith (Medel) Sekules and her husband Kurt Sekules, who lived for over half a century in Kilkeel, Co Down.

Inge escaped to England on the Kindertransports in July 1939. But in 1942 her widowed mother and five brothers, Sigmund, Kurt, Walter, Herbert and Fritz, were deported from Vienna to Minsk in the former Soviet Union, now the capital of Belarus. They were initially incarcerated in the Minsk ghetto and then transferred to the labour camp in the village of Maly Trostinec, where they were murdered.

Maly Trostinec had no permanent gas chambers but there the Nazis used mobile gas vans. In May 1943, 500 people were murdered every day in the gas vans that went daily to and from Minsk and Maly Trostinec.

However, five members of her family escaped the Holocaust. A local voluntary committee in Sevenoaks, Kent, raised money to bring Inge and five other children out of Europe and guaranteed the £50 a child expected by the British government.

At 16, Inge’s eldest sister, Elli, went to live with relatives in the US. Her 13- and 14-year-old brothers, Ernst and Erich, went to live on farms in Denmark, while her nine-year-old sister Rose, and Inge, then seven, went to England, separately and unknown to each other, under the auspices of the Jewish Children’s Refugee Organisation.

Inge later said the fact that these five siblings grew into relatively unscarred and useful citizens was due to the many people who tried ‘to minimise the trauma of family separation and loss for us and for hundreds of other refugee children.’

‘Homes and hearts were opened to us’ she said. Many children stayed with their ‘adopting’ families through school, university, marriage and parenthood. ‘For me,’ she said later ‘these new, kind and loving relationships blurred the picture of a small, smiling woman surrounded by several boys all waving as the train pulled out of Vienna station.’

Inge’s sister Rose lived happily with a Yorkshire Baptist family until she joined their older sister in the US. Inge went first to the Isle of Man and then lived half her life in England and the second half in Northern Ireland. She was reunited many years later with her two sisters who went to the US and her two brothers in Israel.

She was a social worker, a probation officer, and worked in the Royal Victoria Hospital, Belfast. Her husband, Professor Colin Buchanan Radford, was a French academic and dean of the Faculty of Arts at Queen’s University Belfast. He was made OBE in 1994 for services to the arts.

They lived in south Belfast and later in Millisle on the Ards peninsula in Co Down. Inge died in March 2016.

Their daughter, Dr Katy Radford, is project manager at the Institute for Conflict Research and works with other organisations including the Arts Council of Northern Ireland and the Commission for Flags, Identity, Culture and Tradition. She was made an MBE in 2011 for her contribution to community relations in Northern Ireland.

Edith Sekules (1916-2008) and her husband Kurt Sekules (1907-2001) were both born in Vienna: Kurt was born in 1907, the son of Ludwig Lajos Sekules and Else (Hitschmann); Edith was born Edith Mathilde Medel on 8 June 1916 into a middle-class Jewish family, the daughter of Eugen Mendel and Marianne (Bielitz).

Edith grew up in a sophisticated, secular family, enjoying a vibrant Jewish culture. Her love of classical music and literature was nourished in Vienna in the 1920s and 1930s, when she frequented the city’s opera and musical recitals. But problems in her father’s motor business forced Edith to abandon her studies and enter the catering industry to help her family.

Meanwhile, she had met Kurt Sekules, a radio engineer, and they married in 1936. Two years later, the Nazis marched into Vienna and annexed Austria. Edith soon lost her job at the prestigious Hotel Bristol and Kurt was also dismissed.

In the midst of this crisis, their first child Ruth was born in May 1938. The young Sekules family, like many of Vienna’s Jews, resolved to leave Austria as soon as they could.

Edith’s younger sister Lottchen, known as Lotte, left for London having found a job in domestic service. Their mother followed Lotte to England, where she too found work as a domestic and cook.

Kurt applied for a job in Estonia, and he, Edith and their baby daughter boarded a plane for Tallinn on 28 September 1938, the same day that Chamberlain left England to meet Hitler in Munich. Her father and grandmother, however, were forced to remain in Vienna, in the ever-worsening conditions for Jews. They both died the following year.

Edith and Kurt applied to emigrate to Australia and in 1939 their applications were approved in 1939. However, because they were German nationals when war broke out, their permits were cancelled. In June 1940, Estonia became part of the USSR and, when Hitler attacked Russia, the Sekules family became enemy aliens.

They were arrested by the secret police and taken in cattle trucks to Harku, a detention camp near Tallinn, along with many Jewish refugees who were arrested because of their German passports.

They were shunted eastward from camp to camp ahead of the advancing Nazi army, each time in crowded cattle trucks. Rations were basic, space was minimal and the work that allowed prisoners to earn extra food was arduous. Many prisoners did not survive the harsh, Siberian winters.

The family spent some years in Soviet detention camps, including Oranki in Gorki in modern-day Russia, Aktyubinsk in modern-day Kazakhstan, and Kok Uzek at Karaganda in Kazakhstan.

During the winter of 1944, Edith suffered a miscarriage and underwent an operation without any anaesthetic. After the operation, she was allowed a 15-minute rest and ordered to walk the half-hour journey back to the camp alone.

But when World War II ended, the prisoners were not released. Returning Russian soldiers were given priority on the railway lines, and Edith and Kurt did not begin their long journey back to Vienna until January 1947. By then they had three young children, Ruth, Walter and Leah.

Economic conditions in post-war Austria were hard, and there was still a pervasive anti-semitic climate. The Sekules family decided to move to Northern Ireland, where Kurt’s parents had escaped before the war. They travelled via London, where Edith was reunited with Lotte and her mother.

Until a letter from the Kok Uzek camp arrived in London after the war, Edith’s mother had assumed that Edith and Kurt had died in the Holocaust. She had had trees planted in their memory in Israel that Edith visited some years later.

Kurt’s parents and his brother Robert also left Austria before war broke out. They settled in Derry after getting visas under a British government scheme to set up factories in Northern Ireland, and founded an artificial flowers business. The fate of Kurt’s sister Stella and her children remains unknown.

With the help of a family friend, Bernhard Altmann, Edith and Kurt set up the Kilkeel Knitting Mills, a successful knitwear business in Kilkeel, Co Down. Their fourth child, Esther, was born in 1954.

Edith spoke of her experiences at Women’s Institutes and in schools, and spoke at the first two years of Holocaust Memorial Day in Northern Ireland. According to her obituary in the Jewish Chronicle, she attributed her survival to her determination to save her family.

The couple visited Vienna in 2000 when Kurt was 92 and Edith was 83. It was their first visit to Vienna in over 50 years. They went into the same cafes where they used to go when they were a young couple, and took the same walks they had enjoyed in the 1930s along the banks of the Danube.

Edith Sekules published a memoir, Surviving the Nazis, Exile and Siberia (London: Valentine Mitchell), in 2000. Kurt died at 93 in Kilkeel in 2001; Edith died at 91 on 20 February 2008. They were survived by their son, three daughters, 10 grandchildren and 10 great-grandchildren.

Walter Sekules told the Sunday Independent last year how he is worried by the rise of the Far Right in Europe and the growing expressions of hatred of foreigners and immigrants. Asked if he could ever forgive those people who adopted the evil policies that led to the Holocaust and those who would still spread hatred today, he responded: ‘I’m sorry that they haven’t learned better.’