Tales of the Viennese Jews:
12, Salomon Mayer von Rothschild
and the railways in Vienna

Salomon Mayer von Rothschild (1774-1855) … his statue in the Nordbahnof station was the first sight to greet immigrants arriving in Vienna (Photograph: Patrick Comerford, 2019)

In my teens I was surprised to come across a Rothschild family in Dublin, at rugby matches in the Clontarf/Raheny area. The Rothschild family in Ireland came to Dublin from Altona in Germany in 1839. At first, they were involved in the cigar and tobacco business, and many of the early generations are buried in the Jewish cemetery in Ballybough.

The late Asher Benson, in his Jewish Dublin, says there is no known connection between this Rothschild family and the famous Rothschild banking family that has spread across Europe.

The Rothschild banking family traces its ancestry back to 1577 and to Izaak Elchanan Rothschild, who took his name from the German for the red shield that was a sign outside his family home for many generations. The name Rothschild means ‘Red Coat,’ as in an heraldic coat of arms. His grandchildren and descendants used this as their family name, and kept it even after they moved house in 1664.

A statue in the Jewish Museum in at the Palais Eskeles on Dorotheergasse in Vienna depicts Salomon Mayer von Rothschild (1774-1855), the German-born banker and founder of the Austrian branch of the Rothschild banking family.

Mayer Amschel Rothschild’s third child and second son, Salomon Mayer von Rothschild, was born in Frankfurt-am-Main on 9 September 1774 and was the ancestor of the Austrian branch of the banking family.

As the family business expanded across Europe, the eldest Rothschild son remained in Frankfurt, while each of the other four sons were sent to different European cities to establish a banking branch.

Salomon von Rothschild and his brothers were further honoured in 1822, when the Emperor gave them the hereditary title of freiherr or baron. In 1843, Salomon became the first Jew to ever be given honorary Austrian citizenship. He made connections with the Austrian aristocracy and political elite through Prince Klemens Metternich and Friedrich von Gentz.

The Viennese bank was highly successful under the direction of Salomon von Rothschild, and played an integral role in the development of the Austrian economy. The bank in Vienna financed the Nordbahn rail transport network, Austria’s first steam railway, and funded many government undertakings.

The marble statue of Salomon von Rothschild in the current exhibition in the Jewish Museum on Dorotheergasse is the work of the Austrian sculptor Johann Meixner (1819-1872) in 1869/1870. Meixner was one of the founding members of the Vienna Künstlerhaus in 1861, and this statue originally stood in the hall of Nordbahnof station in Vienna.

The Nordbahnof station was built in 1865, ten years after Salomon’s death. In the second half of the 19th century, this station became the means of transport for Viennese transport, and its terminus became their point of entry. When they arrived in Vienna, the first thing they saw on their arrival was this statue of Rothschild, with its optimistic promise of unending possibilities.

The statue was removed in 1938 at the time of the German-Austrian Anschluss and the Nazi seizure of power, and was given to the Historisches Museum. It was transferred to the Railway Museum, later incorporated in the Technical Museum, and is on loan to the current exhibition in the Jewish Museum. 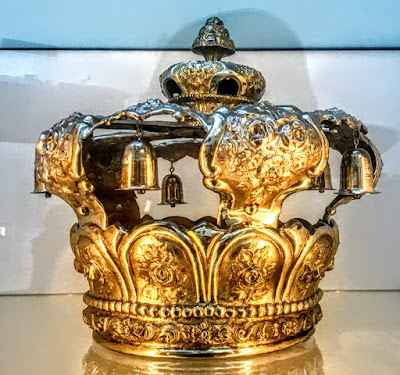 The crown of a Torah scroll in the Jewish Museum on Dorotheergasse in Vienna (Photograph: Patrick Comerford, 2019)