Tales of the Viennese Jews:
5, Lily Renée, from Holocaust
Survivor to Escape Artist 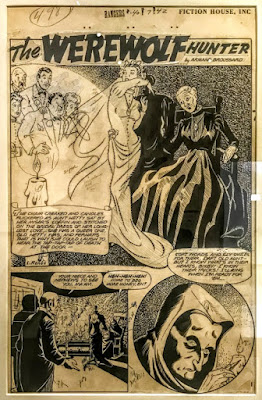 An exhibition in the Jewish Museum in Judenplatz celebrates the work of Lily Renée, a Viennese-born artist who escaped the Holocaust and became a comic book pioneer in the US in the 1940s and 1950s.

Lily Renée Phillips is a Viennese-born artist, writer, and playwright. In her work, she is often credited as L Renée, Lily Renée, or Reney. She is best known as one of the earliest women in the comic-book industry, beginning in the period in the 1940s known as the ‘Golden Age of Comics.’

She escaped from Nazi-occupied Vienna to England and later to New York, where she found work as a penciller and inker at the comics publisher Fiction House, working on such features as ‘Jane Martin,’ ‘The Werewolf Hunter,’ ‘The Lost World’ and ‘Senorita Rio.’

Lily Renée was born Lily Renée Willheim into a well-off Jewish family on 12 May 1921 in Vienna, where her father, Rudolf Willheim, worked as a manager at the Holland America line, a transatlantic steamship company.

From an early age, she was surrounded by art and culture. As a child, she visited art museums frequently and drew as a hobby. The exhibition in the Jewish Museum recalls how as a child she would sit under the dining table in her parents’ home, drawing mythical creatures or magnificent robes.

At the age of six, she had her first exhibition of her art from her school art class. Around that time, her mother entered her photograph into a contest where first prize was a film contract. She won the contest, but her father would not allow her to go into show business.

Nazi Germany annexed Austria at the Anschluss on 12 March 1938. The majority of Viennese welcomed the Nazis. She was no longer allowed to attend school, and her parents began an effort that took almost two years to get her out of Austria.

While she was learning English in school, she had found an English pen-pal, Molly Kealy. The Wilheims family asked the Kealy family to send her a visitor’s permit. When it finally arrived, her family put her on the Kindertransport in late 1939, leaving her parents behind in Nazi-occupied Austria.

When Lily arrived in England, she went to live with the Kealys in Horsforth, five miles outside Leeds city centre. However, Mrs Kealy, seemed to think that by bringing her over, the family was had an unpaid servant.

When World War II broke out a month later, Mrs Kealy told her she did not even know if Lily’s parents were even alive. That day, she walked into Leeds, applied at an employment agency, and quickly found work as a mother’s helper. She also worked a servant, a caretaker, and a candy striper whose job was to bring the new-borns down the shelter whenever the air-raid sirens went off.

Lily lived in Leeds for two years, waiting for news about her parents in Nazi-occupied Austria. They managed to escape by trading two buildings they owned with the Nazis. When she received a letter saying they had reached the US, she left England to join them in New York, where they were living in a boarding house on West 72nd Street on Manhattan’s Upper West Side. Later, after the war, she learned that two of her uncles and an aunt were killed by the Nazis.

In New York, she took up art again, at first painting Tyrolean designs on wooden boxes. She then got a job on the 46th floor of Rockefeller Centre at Reiss advertising agency. They paid her 50 cents an hour to draw catalogues for Woolworth’s, but she also found time to go to night school, studying at the Art Students League of New York and the School of Visual Arts.

At the age of 20, she began a new career in New York that brought her recognition for her superhero comic strips featuring elegant young women fighting against Germany and its Axis allies, Italy and Japan. Fiction House was looking for women to replace its male artists who had been drafted during World War II, and at first she worked as a penciler and inker alongside other female comic illustrators and writers, including Nina Albright and Fran Hopper.

By late 1942 or early 1943, working under her first and middle names, Lily Renée was assigned the Fiction House feature ‘Jane Martin,’ starring a female pilot working in the male-dominated aviation industry. Her work on the feature, whose scripts are credited to ‘FE Lincoln,’ ran in Wings Comics from March 1943 to August 1944.
She also illustrated the feature ‘The Werewolf Hunter,’ with scripts credited to ‘Armand Weygand’ and ‘Armand Broussard,’ in Rangers Comics from December 1943 to April 1948. ‘The Werewolf Hunter’ was about a professor and monster hunter.

This early work was infused it with the Viennese art nouveau and German fairy tales that she grew up with. Her art evoked German expressionist films and her women were dressed in the high fashion of the day.

Her other work included the science-fiction feature ‘The Lost World,’ with scripts credited to ‘Thornecliffe Herrick,’ in Planet Comics (September 1944 to July 1947); and ‘Señiorita Rio,’ about a south-of-the-border adventuress in wartime espionage for the US government, with scripts credited to ‘Morgan Hawkins’ and appearing in Fight Comics from October 1944 to August 1947. While Señiorita Rio, the actress Rita Farrar, was designed by artist Nick Cardy in 1942, Renée was the artist who became most strongly associated with the character.

After she left comics, Renée worked on some children’s books, wrote some plays and designed textiles for Lanz of California, and jewellery for Willy Woo.

In 1944, she married an engineer, Ernest Meyer, an engineer. However, the marriage did not last and was annulled. In 1947, she married Eric Peters, another Viennese refugee who was 22 years her senior.

He had been a political cartoonist, and after drawing a caricature of Joseph Goebbels, the Gestapo showed up at his house to arrest him, but he was not home at the time. He was tipped off, borrowed a pair of skis, and escaped over the Alps. Later his work appeared in glossy magazines such as Collier’s and the Saturday Evening Post.

Her marriage to Peters had ended by 1949, and in 1953 she married Randolph Phillips. They had a son Rick and a daughter Nina. He was a politically active financial consultant who in the 1940s directed the American Civil Liberties Union’s national committee for conscientious objectors. He chaired the National Committee for Impeachment in 1972.

As a freelance artist, Lily continued until a few years ago creating surreal pictures and textile designs, children’s book and fantasy motifs. Lily attended Comic-Con International in San Diego in 2007, when Friends of Lulu nominated her to its Hall of Fame.

In later years, she lived near Madison Avenue in Manhattan. A graphic biography, Lily Renée, Escape Artist: From Holocaust Survivor to Comic Book Pioneer was published in 2011. The book chronicles he escape from the Nazis and her early years at Fiction House. 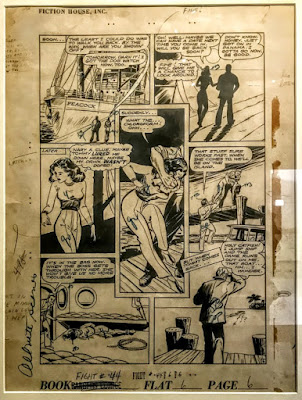 A graphic biography of Lily Renée was published in 2011 (Photograph: Patrick Comerford, 2019)