Tales of the Viennese Jews:
11, Wolfgang Amadeus Mozart
and his Jewish librettist 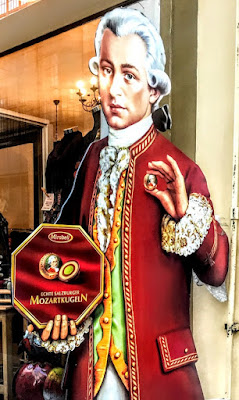 Wolfgang Amadeus Mozart (1756-1791) … his image seems to be present on every street corner in central Vienna (Photograph: Patrick Comerford, 2019)

Of course, both composers died in Vienna, Mozart in 1791 and Beethoven in 1827. But while Ludwig van Beethoven was born in Germany – in Bonn in 1770, Wolfgang Amadeus Mozart was born in Austria – in Salzburg in 1756.

The great Jewish composers and musicians associated with Vienna included Gustav Mahler (1860-1911), who lived in Vienna in 1897-1907; and the Hungarian violinist Joseph Joachim (1831-1907), a cousin of the grandmother of the Cambridge philosopher Ludwig Wittgenstein. Nor should we forget the Jewish origins of the Strauss family. 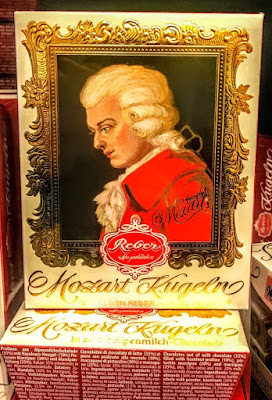 There can be no doubting that Viennese citizens and shopkeepers regard Mozart as one of their own – he decorates shop windows, chocolate boxes and a variety of marzipan gifts on every street in the Austrian capital.

And, while no-one could even imagine that Mozart was Jewish, many key Jewish people influenced his life and work.

The Habsburg Emperor, Joseph II (1780-1790) issued his ‘Edict of Toleration’ in January 1782. For a long time, his chief censor was Joseph von Sonnenfels, a convert to Catholicism but a grandson of Rabbi Michael the Pious, Chief Rabbi of Berlin. He was a subscriber to Mozart’s piano recitals and generously helped the composer’s brother-in-law, Joseph Lange, when the actor was ill.

Joseph II raised Israel Hönig (1724-1808), a rich merchant and a subscriber to Mozart’s piano evenings, to the nobility with the title of ‘Edler von Hönigsberg’ and made him a ‘Government Counsellor’ (Regierunsrat), although he remained a faithful Jew.

Joseph II also employed Lorenzo Da Ponte (1749-1838), a converted Jew from Venice and a one-time Catholic priest, as the librettist of the Imperial Opera House.

Lorenzo da Ponte was born Emanuele Conegliano in the Republic of Venice. He was Jewish by birth but in 1764, his widowed father converted himself and his sons to Roman Catholicism in order to remarry. Emanuele took his new name of Lorenzo Da Ponte from the Bishop of Ceneda, Lorenza Da Ponte, who baptised him. He was ordained a priest in 1773 and moved to Venice.

But the young priest led a dissolute life: he had a mistress while he was the priest at the Church of San Luca and they had two children. He was charged with ‘public concubinage’ and ‘abduction of a respectable woman’ in 1779. At his trial, it was alleged that he had been living in a brothel and organising the entertainments there.

He was found guilty, banished from Venice for 15 years, moved to Gorizia Görz, then part of Austria, and from there moved to Vienna. There, through the good offices of the composer Salieri, Da Ponte met Joseph II and later Mozart, at the residence of Baron Wetzlar, a converted Jew who supported the composer and wanted to help Da Ponte.

In his collaboration with Mozart, the Jewish-born Venetian poet wrote the libretti of three operas: The Marriage of Figaro (1786), Don Giovanni (1787) and Cosi fan tutte (1790). 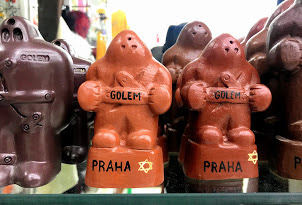 Figures of the Golem on a shop shelf beside the Old-New Synagogue in Prague … does the Golem comes to life in the statue in ‘Don Giovanni’? (Photograph: Patrick Comerford, 2019)

The original character of Don Juan first appears in The Trickster of Seville (1630), a play by Tirso de Molina (1579-1648), a Spanish monk from a family of converted Jews or conversos. A century and a half later, another converted Jew and priest, Emmanuele Conegliano, known as Lorenzo da Ponte, reworked Tirso’s play as a libretto for Mozart’s Don Giovanni.

Jewish folklore comes to life in the finale of Don Giovanni, as a huge marble statue is turned into flesh to exact vengeance on a murderer. Indeed, the oblique reference to the Yiddish legend of Der Golem was not lost on audiences in the Austro-Hungarian empire who were familiar with the tales of the Golem of Prague.

Mozart, like Michelangelo – who concealed his love of Judaism in his Sistine Chapel painting – criticised the anti-Semitism of his time, in his opera Il Seraglio, depicting the hated Turk, Selim Pasha, as a compassionate man devoid of religious prejudices.

Mozart was well-read in the works of the Jewish philosopher Moses Mendelssohn (1729-1786), grandfather of the composer Felix Mendelssohn, owned copies of his works and seems to have been influenced by his thinking. 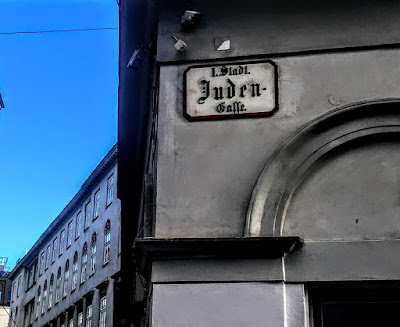 Judengasse or Jewish Street … Wetzlar helped Mozart to move to No 3 in 1783 (Photograph: Patrick Comerford, 2019)

Baron Raymond Cordulus (Naphtali Herz) Wetzlar von Plankenstern (1715-1799), a wealthy Jewish banker who converted to Catholicism, was Mozart’s understanding landlord during his early, struggling period in Vienna and Mozart asked Wetzlar to be the godfather of his first son. When Mozart found more secure lodgings at Judengasse 3 in 1783, the baron paid for his move.

Mozart and introduced to Da Ponte were introduced at Wetzlar’s palais in 1783. When theatrical intrigues seemed to prevent the first staging of The Wedding of Figaro in Vienna in 1785, Wetzlar to look after the financing of the opera and to stage the production in London. In a letter to his father, Mozart says ‘the Baron, a wealthy Jew, is my true and good friend.’

When almost all wealthy supporters had abandoned Mozart by 1791, shortly before his death, he was still welcome at Wetzlar’s house.

The composer Felix Mendelssohn Bartholdy (1809-1847), grandson of the philosopher Moses Mendelssohn, was known to his contemporaries as ‘the Mozart of the 19th century.’ He regularly conducted Mozart’s orchestral compositions and played the piano concertos with great enthusiasm.

Ernst von Mendelssohn Bartholdy, a nephew of the composer, presented some valuable musical manuscripts to the library of German Emperor William II in 1908. They included a complete copy of Mozart’s Entfuhrung aus dem Serail.

Ludwig Wittgenstein’s kinsman, Joseph Joachim, was the leading violin virtuoso of his time and a close friend of Clara and Robert Schumann and of Johannes Brahms. In a letter to Clara Schumann on 18 August 1857, he writes: ‘… for us, who generally consider Mozart a musical Divinity, all little parts by him are interesting and dear.’

Hermann Levy (1839-1900) was the conductor at Bayreuth of the first performance of Richard Wagner’s Parsifal, and provided one of the best German translations of Le Nozze di Figaro.

Gustav Mahler (1860-1911) was instrumental in revitalising the popularity of Mozart’s operas at the beginning of the 20th century. He was the meticulous, demanding conductor of their initial productions at the Salzburg Festivals.

Bruno Walter (Schlesinger) (1876-1962) wrote in his Von der Musik und Musizieren (‘About Music and Music Making’) in anticipation of the approaching bicentenary of Mozart’s birth on 27 January 1956. He wrote, ‘To begin with, this should serve above all as a word of gratitude for the supreme joy with which Mozart’s compositions have brightened, blessed my life.’ 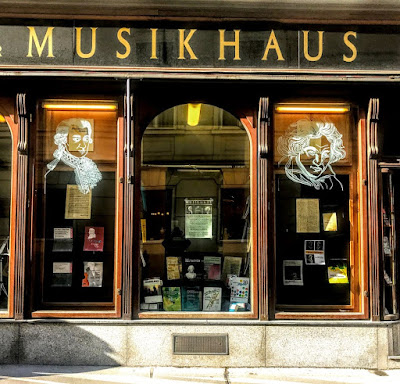 Mozart and Beethoven in the window of Vienna’s best-known music shop, the Musikhaus Doblinger on Dorotheergasse (Photograph: Patrick Comerford, 2019)